Tropical Storm Delta has formed in the Caribbean near Jamaica and is expected to become a hurricane in the Gulf. SE Texas is not in the cone, but elevated tides and coastal flooding will be possible later in the week. We will watch Delta very closely.

HOUSTON - Tropical Storm Delta has formed in the Caribbean and is expected to strengthen as it approaches the U.S. Gulf Coast.

The consensus of computer models shows Delta impacting an area from Louisiana to the Florida Panhandle.  Southeast Texas is not in the cone of uncertainty, but elevated tides and coastal flooding will be possible later in the week.

According to the National Hurricane Center, Delta is forecast to strengthen over the next few days and is expected to become a hurricane.

Delta is moving toward the west-northwest near 9 mph, and a faster northwestward motion is expected Tuesday and Wednesday.

The NHC says, on the current forecast track, the center of Delta is expected to move away from Jamaica on Monday, move near or over the Cayman Islands Monday night, and approach the Isle of Youth and western Cuba Tuesday afternoon or evening.

Delta is expected to move into the southeastern Gulf of Mexico on Tuesday night or early Wednesday. 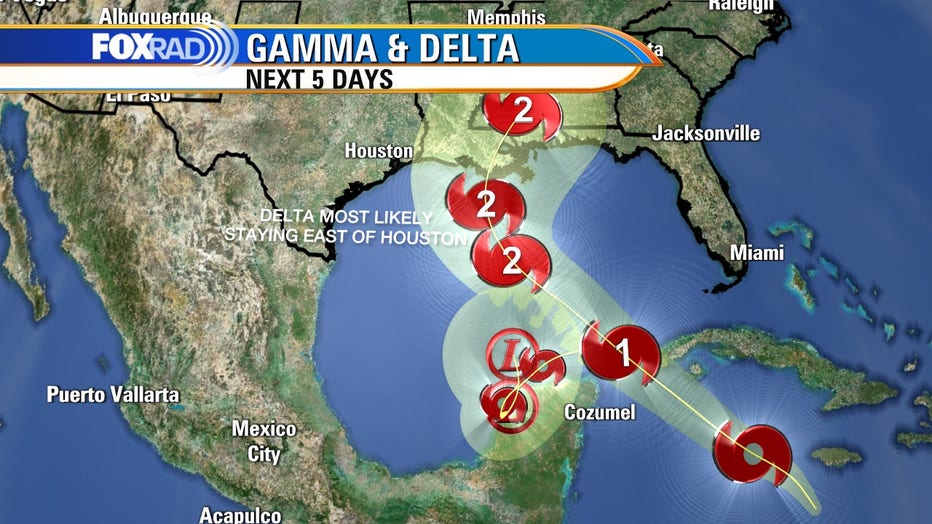 Tropical Storm Delta is expected to become a hurricane as it approaches the U.S. Gulf Coast. Tropical Storm Gamma is not a concern for Southeast Texas.

Another tropical storm located about 150 miles north-northwest of Cozumel, Mexico, has weakened and is expected to weaken further, according to the NHC. Tropical Storm Gamma has maximum sustained winds near 45 mph.

Tropical Storm Gamma is not a concern for Southeast Texas.