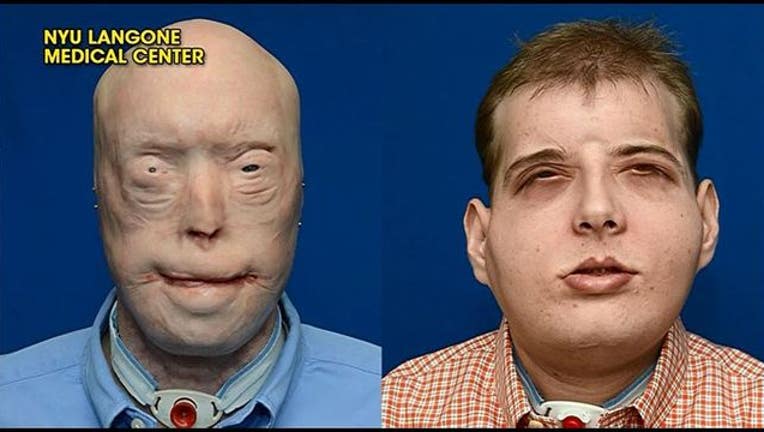 NEW YORK (AP) — A volunteer firefighter badly burned in a 2001 blaze has received the most extensive face transplant ever, covering his skull and much of his neck, a New York hospital announced Monday.

The surgery took place in August at the NYU Langone Medical Center. The patient, 41-year-old Patrick Hardison, is still undergoing physical therapy at the hospital but plans to return home to Senatobia, Mississippi, in time for Thanksgiving.

The surgery has paved the way for him to regain normal vision, and in an interview last week he said that will let him accomplish a major goal: "I'll start driving again."

More than two dozen face transplants have been performed worldwide since the first one in France in 2005. Dr. Eduardo Rodriguez, who led the surgical team that did Hardison's transplant and recently wrote a review of the field, said Hardison's is by far the most extensive performed successfully in terms of the amount of tissue transferred.

The transplant extends from the top of the head, over Hardison's skull and down to the collarbones in front; in back, it reaches far enough down that only a tiny patch of Hardison's original hair remains — its color matched by the dark blond hair growing on his new scalp. The transplant includes both ears.

It's "a historic achievement," said Dr. Amir Dorafshar, co-director of the face transplant program at the Johns Hopkins University School of Medicine, who was not involved in the operation. "This type of treatment option will potentially revolutionize the care of patients with severe facial burn injuries."

The surgery began Aug. 14 and lasted 26 hours. It left no scars on Hardison's new face because the seam of the transplanted tissue runs down the back of his skull.

The donor was 26-year-old New York artist and competitive bicyclist David P. Rodebaugh. He had died of injuries from a biking accident on a Brooklyn street.

Hardison was burned Sept. 5, 2001, in Senatobia in northwestern Mississippi. A 27-year-old father of three at the time who'd served for seven years as a volunteer firefighter, he entered a burning house to search for a woman. The roof collapsed, giving him third-degree burns on his head, neck and upper torso.

He spent about two months at a Memphis, Tennessee, burn center. Doctors used a layer of skin from his legs to cover his wounded head, but he had lost his ears, lips, most of his nose and virtually all of his eyelid tissue.

Since he could not blink, doctors used skin grafts to reinforce what remained of his eyelids and sewed them nearly shut to protect his eyes. That left him with only pinhole vision.

"I was almost totally blind," he recalled. "I could see just a little bit."

His face was "one huge scar," Rodriguez said. Hardison still went to baseball games and did other things outside, although people stared. He playfully told curious children that he had fought a bear. Still, he said, life was hard. He endured 71 surgeries.

Eventually a church friend of his wrote to Rodriguez, who had performed a 2012 face transplant at the University of Maryland Medical Center. The doctor said he would try to help, and in August 2014 Hardison was placed on a waiting list.

"We were looking for the ideal donor," one who matched Hardison on biological traits to minimize the risk of his body's rejecting the new tissue, as well as things like skin and hair color, said Rodriguez, who by then had moved to NYU Langone.

A year later, Rodebaugh was identified as a potential donor by LiveOnNY, the nonprofit organization that seeks transplant organs and tissue in the New York City area. A native of the Columbus, Ohio, area, he had signed up to donate organs. His mother gave permission to use his face, noting that Rodebaugh had always wanted to be a firefighter, said LiveOnNY president Helen Irving.

The hospital paid for the transplant operation, which included attaching four bone segments to Hardison's skull, as anchors to prevent the face from drooping.

Now, three months later, the lower part of his face remains swollen, but Rodriguez said that will go away in a few months. With his new eyelids and more surgery, he's expected to regain a normal field of vision for the first time in more than a decade. He will have to continuing taking medications to prevent his body from rejecting the transplant.

Eventually, "a casual observer will not notice anything that is odd" in Hardison's new face, which will blend features of his original face and the donor's, Rodriguez said.

Hardison said his new face has already made a difference when he goes outside.

"I used to get stared at all the time, but now I'm just an average guy," he said.

He's been told he can't return to firefighting because of insurance concerns, but he has another plan: motivational speaking or something similar, perhaps for wounded veterans.

His message? "Just how there is hope."

Follow Malcolm Ritter at http://twitter.com/malcolmritter His work can be found at http://bigstory.ap.org/content/malcolm-ritter