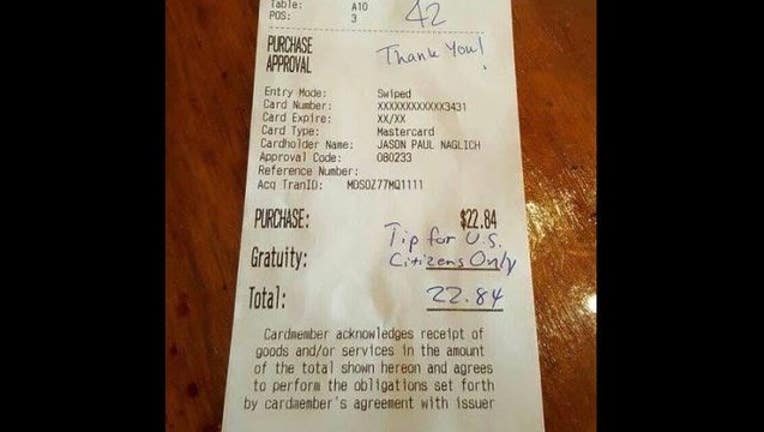 REDONDO BEACH, Ca. - A receipt left behind by a customer at a restaurant in Redondo Beach, California is causing quite the stir on social media.

A man was served at restaurant that serves Asian cuisine, and when his server came back to collect his signed receipt, she instead found a short note instead of a tip on the gratuity line.

"Tips for U.S. citizens only," the note read.

His server, a woman in her thirties, is working in the United States on a visa.

"Keep it to yourself!" said her coworker Adison to local news reports. "It doesn't... it doesn't help anything when you say something like that to someone."

When the man left the restaurant, the troubled note didn't stop there. Social media's response has people calling the tipper by name--as it appears on the receipt that has now gone viral.

"If you can't afford to tip, eat at home." says one Facebook user.

A local company even responded to the stir.

The waitress has not been identified by name, but tells local news reports that she hopes to continue to work and provide a better life for her children.