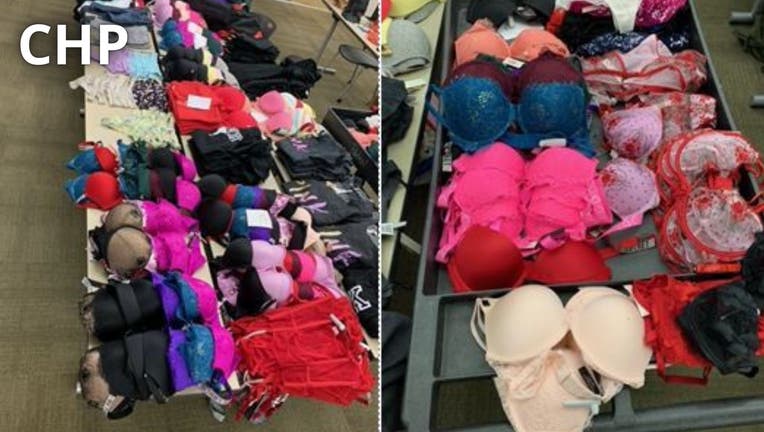 SAN DIEGO COUNTY, Calif. - Three suspects were busted in connection to a retail crime ring on Monday. The suspects were accused of stealing thousands of dollars in lingerie items.

The California Highway Patrol recovered 329 lingerie items, valued at more than $16,000. The underwear were allegedly stolen from Victoria's Secret and Pink stores in malls across California.

CHP identified the suspects as 20-year-old Shyonie Davis, of San Francisco; 21-year-old Ahjanae Woods, of Antioch; and 18-year-old Wessaun Johnson, of Antioch. All three were booked into San Diego County jails, according to CHP.

According to CHP, the suspects rented a car and left the Bay Area Thursday evening and drove as far south as San Diego County – for the sole purpose of raiding the lingerie items.

The suspects were spotted at the following shopping centers, according to CHP:

On Monday, police spotted the suspect vehicle near a mall in Carlsbad shortly after a "Be-On-The-Lookout" was issued across San Diego County. Officers eventually located the suspects and placed them in custody. Davis, Woods and Johnson were booked in connection to organized retail crime, according to CHP in a press release.