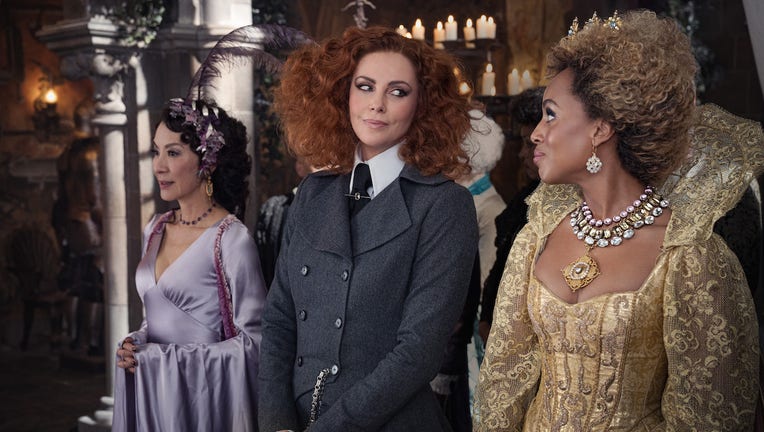 Nor is it a low-stakes enterprise. Directed and co-adapted by Feig from Soman Chainani’s young adult book series of the same name, "School" is a sprawling introduction to a world Netflix surely hopes will be its own Hogwarts. But like many a first outing, it’s saddled with a whole novel’s worth of exposition. Throw in some tonal confusion, a clunky script and a bloated runtime, and this would-be franchise starts to sink before it even gets off the ground

RELATED: ‘Uncharted’ is #1 on Netflix, but is it any good?

About '"The School for Good and Evil": A fairy tale training ground

"The School for Good and Evil" follows best friends Sophie (Sophia Anna Caruso of Broadway’s "Beetlejuice") and Agatha ("High School Musical: The Musical: The Series" star Sofia Wylie), a pair of mischievous young women whose status as small-town outsiders bonds them together. Frustrated by the mundanity of her life and convinced she’s destined for greatness, Sophie makes a wish to attend the mythical School for Good. Before you can say bibbidi-bobbidi-boo, the girls are whisked away — only for the goody-two-shoes/aspiring princess Sophie to be mistakenly dropped at the School for Evil, while the acerbic, guarded Agatha finds herself at the School for Good.

At first, they’re both eager to find a way home. But soon the girls are swept up into a sprawling, generations-long battle between the Schools for (and forces of) Good and Evil. Before they realize it, the two friends have become key players on opposite sides of a raging war. 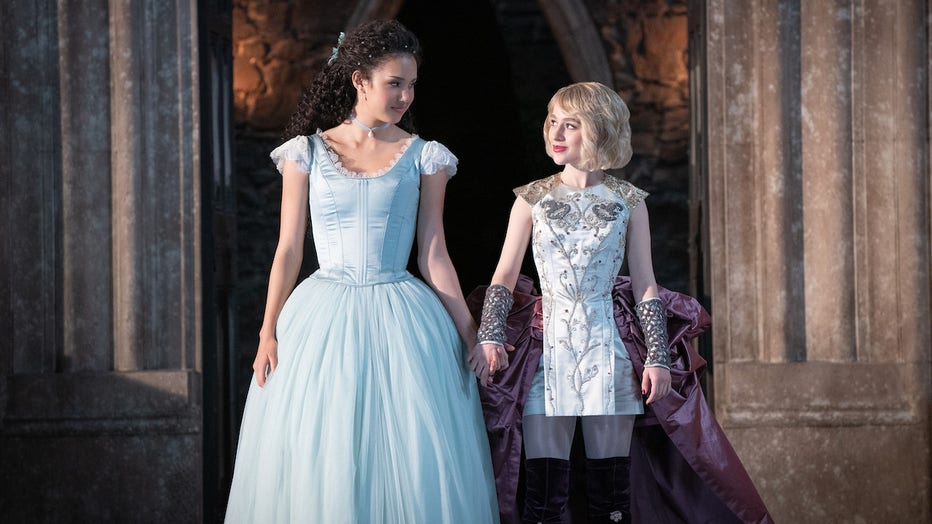 As the first installment of a potentially mammoth franchise (the film’s final scene makes Netflix’s eagerness for more all too obvious), "The School for Good and Evil" has a lot of boxes to check before it can begin to tell any kind of a story: It must establish the world, explain the magic, let history unfurl and, of course, make plain the important (yet arbitrary) rules that govern this universe. Although the concept itself — two rival schools where fairytale heroes and villains are trained — isn’t particularly complex or even all that fresh (think "Harry Potter" meets Disney’s "Descendants"), the film devotes so much time to checking those boxes that when the story does finally get moving, it’s almost too little, too late.

WATCH FREE ON TUBI: Selena Gomez in "Another Cinderella Story" — get the app

Clocking in at a whopping 147 minutes, "The School for Good and Evil’ should have plenty of time for that checklist while also developing the characters and spinning a good yarn. But it seems that Feig and co-screenwriter David Magee struggled with choosing which elements of the world-building this first entry demanded, and which they might save for future installments. "School" feels almost like two different movies stitched together — and the first is drastically inferior to the second. Until the halfway point, it’s almost a slog. 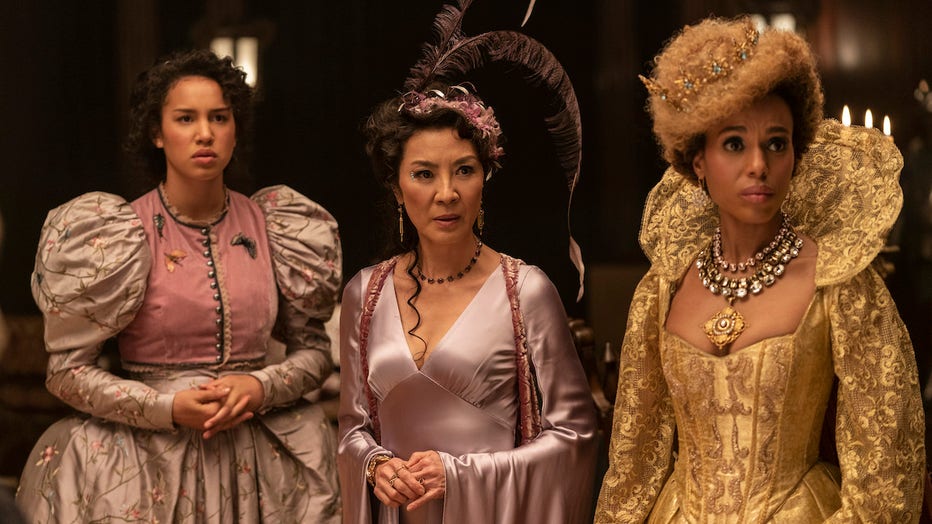 Feig’s affinity for comedy works against him in the film’s first hour-plus. Moments that warrant spectacle, even reverence, get bogged down by clunky comedic beats that feel forced rather than clever. That’s a frustration heightened by the quality of the cast: Seeing the likes of Kerry Washington and Michelle Yeoh saddled with lackluster joke imbues "School" with a bizarre, even mocking tone at odds with the film’s more grounded elements.

See "The School for Good and Evil" for: two strong (and well-dressed) heroines

Once the film finally moves past the exposition dump (at around the halfway mark), "The School for Good and Evil" becomes a well-paced, engaging fantasy-adventure film anchored by a pair of compelling heroines. Viewers able to forgive the sluggishness and clumsiness of the first half will find plenty to enjoy about "School " — especially as a vehicle for the dazzling Wylie.

WATCH FREE ON TUBI: Ian McShane and Lily Collins in 2018’s animated romp "A Wizard’s Tale" — get the app

The film is structured around the unbreakable bond between heroines Sophie — an aspiring princess whose placement in the School for Evil may not have been a mistake after all — and Agatha, who initially flounders as a School for Good student but eventually finds her footing as the hero of her own story. To the film’s credit, both Sophie and Agatha are well-written, well-developed characters who are each given significant time to grow — neither girl positioned as "better" or more important than the other. 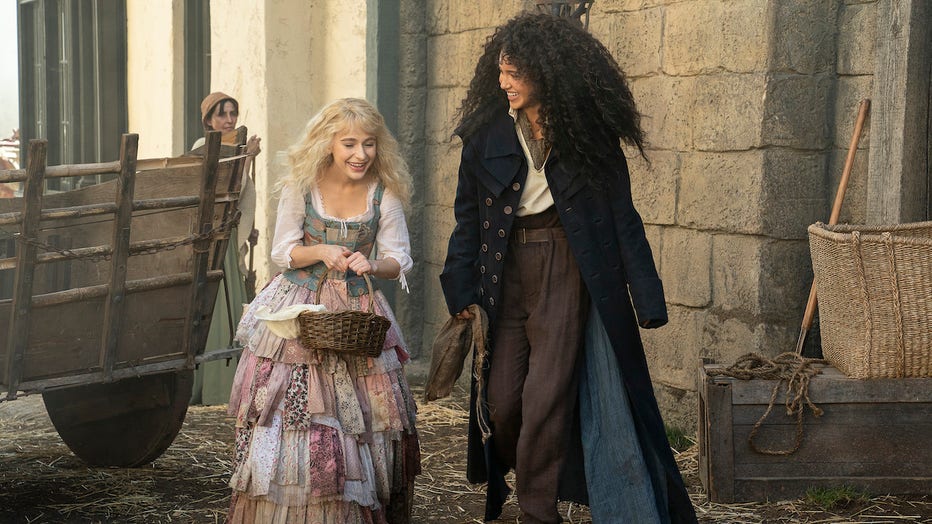 It’s here where the screenplay snaps into focus. Agatha and Sophie’s stories are very different — that’s all but unavoidable, as they’re attending drastically different schools. Yet the arc for each is deliberately crafted to emphasize their individual personalities and capabilities; these are far from cookie-cutter heroines.

But, as is often the case with a pair of protagonists, one outshines the other. And "The School for Good and Evil" undeniably belongs to Wylie.

Caruso brings plenty of cackling panache to her role — a quality the young actress nicely counterbalances with vulnerability when Sophie inevitably realizes the error of her ways. Still, it’s Agatha’s simpler but no less compelling story that delivers the film’s most effective moments. Where Sophie is selfish and ambitious, Agatha is almost painfully selfless — and while the writing sometimes teeters on the border of the "not like other girls" cliché, the warmth and passion of Wylie’s performance grounds the whole in sincerity, empathy and compassion.

WATCH FREE ON TUBI: Teen superstar Zendaya in "Zapped" — get the app

It’s incredibly easy to believe Wylie as a would-be princess. There’s a genuine kindness and humility to the character that, combined with Wylie’s winning presence, positions Agatha as a classic fairytale heroine in the vein of Snow White or Cinderella. This is a young woman who’s used to being patronized and scorned, first by the people of her hometown, then by her snobbish classmates in the School for Good.

Yet unlike her best friend, Agatha finds a way to persevere with grace, not cruelty — but rest assured, she’s no pushover, a reality made clear by Wylie’s impassioned approach and steely gaze. There’s a ferocity and strength to Agatha (a particular specialty of Wylie’s, whose role in "High School Musical: The Musical: The Series" possesses a similar fire) that makes her a compelling protagonist, one who’s as comfortable with a sword as she is in a ballgown. 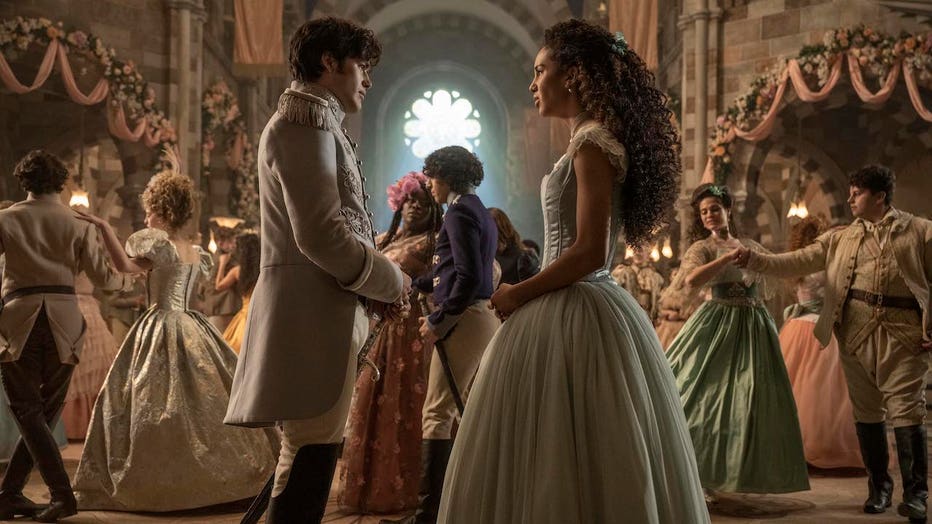 Outside of Wylie’s turn as Agatha, the film’s other major strength is its dazzling costumes, courtesy of designer Renee Kalfus. From Aggie’s lovely gowns to the pinstriped suit-dress and larger-than-life hair of Evil Headmistress Lady Lesso (Charlize Theron), excellent makeup and costume design lend "The School for Good and Evil" a memorable visual flare that sets it apart from plenty of its genre contemporaries.

Though the lengthy runtime and confused tone may hold "The School for Good and Evil" back, Wylie’s performance and Kalfus’ costumes are the extra credit that keeps this would-be franchise starter from a failing grade. But no matter what happens in the future, for now, Netflix has a memorable action-adventure story — and a pair of truly compelling heroines — it can take home to hang on the fridge.

About the writer: Lauren Coates is a Chicago-based film critic and entertainment writer with a passion for queer and female-led media and an everlasting love for all things sci-fi. You can find her on twitter @laurenjcoates.

Make it a double feature with "Howard High," streaming free on Tubi

Howard High (2022): A modern-age "Bring It On," "Howard High" is an energetic teen musical that follows a high school performance group who must compete against a rival school in order to save their arts program. The crowd-pleasing film from "You Got Served" director Chris Stokes is inspired by his 2020 TV miniseries of the same name, which is also streaming on Tubi. With its talented cast of up-and-comers, "Howard High" shines a light on the challenges that school arts programs face in underfunded neighborhoods — all through the power of song and dance. "Howard High" is a Tubi Original. Rated TV-14. 102 minutes. Dir: Chris Stokes. Featuring: Chrissy Stokes, Veronika Bozeman, Lindsay Diann, Jarell Houston, Dylan Mooney.

"Howard High" is streaming free on Tubi — get the app

How to watch "The School for Good and Evil"

"The School for Good and Evil" is currently streaming on Netflix. Plans start at $9.99 a month; higher tiers include better quality video and the ability to stream on multiple devices simultaneously.