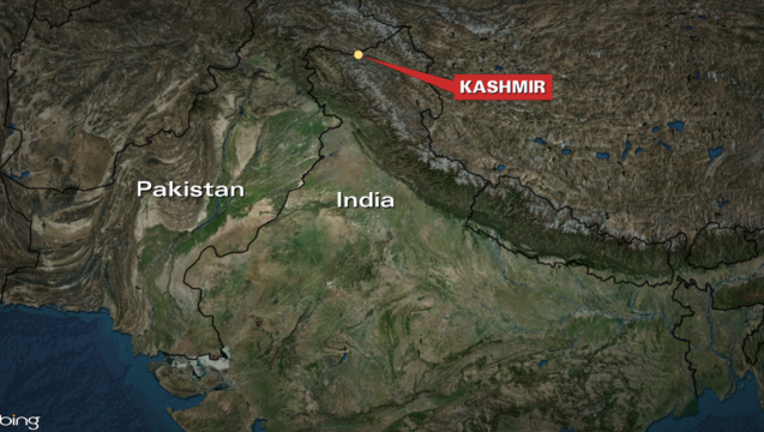 U.N. Secretary-General Antonio Guterres is calling on India and Pakistan to refrain from taking any steps that would affect the status of Kashmir.

Dujarric reiterated that statement when asked if the secretary-general supports the Security Council's call for a plebiscite on the future of Kashmir.

He said Guterres also recalls the 1972 Simla agreement on bilateral relations between India and Pakistan "which states that the final status of Jammu and Kashmir is to be settled by peaceful means, in accordance with the Charter of the United Nations."

He said the secretary-general "is also concerned over reports of restrictions on the Indian-side of Kashmir, which could exacerbate the human rights situation in the region," and reiterates his call for "maximum restraint."

Indian Prime Minister Narendra Modi says the downgrading of Indian-administered Kashmir from a state to a federally controlled territory will help end decades of terrorism and separatism incited by archrival Pakistan.

In a nationally broadcast speech Thursday, Modi described changes imposed this week by his government in Kashmir as historic and assured its residents that the situation will soon become normal.

Hindu-majority India has imposed an unprecedented security lockdown and a near-total communications blackout in the Muslim-majority region while revoking its special constitutional status.

It downgraded the divided region from statehood to a territory, limited its decision-making power and eliminated its right to its own constitution.

Modi said the "mainstreaming" of the Kashmiri people with the rest of the nation would expedite development and create new jobs with investment from public and private companies.

He accused Pakistan of using the past arrangement "as a weapon to incite people of the region against India," and said he has complete faith that the new system will be able to free Kashmir from terrorism and separatism.

An opposition Congress party lawmaker says security forces have prevented him from visiting the Indian-administered portion of Kashmir, causing him to return from its main airport after spending several hours there.

Lawmaker Ghulam Nabi Azad says he flew to Srinagar on Thursday to assess the situation in Muslim-majority Kashmir after the imposition of a media and security clampdown during the revocation of its special constitutional status by Prime Minister Narendra Modi's Hindu nationalist-led government.

Azad told reporters on his return to New Delhi that he was not allowed to meet party leaders in Kashmir.

Pakistan says it is still committed to continue talks about the opening of a visa-free border crossing to allow pilgrims to visit a Sikh shrine just inside the Islamic nation despite increasing tension with New Delhi over Kashmir.

Pakistan and India have held several rounds of talks on the plan to give special permits to devotees to access the shrine, the Gurdwara Darbar Sahib. Guru Nanak, the founder of the Sikh religion, settled in what is now Pakistan's Kartarpur, where he spent the last 18 years of his life.

The shrine was built after Guru Nanak died in the 16th century and is visible from the Indian side of the border.

Pakistan's foreign minister says Islamabad is not considering any military actions and instead is looking at political and legal options to challenge India's changes to disputed Kashmir's status.

Shah Mahmood Qureshi made the remarks Thursday at a news conference in Islamabad.

He says he will soon travel to China to inform Beijing about the situation after India downgraded the special status of Kashmir, a Himalayan region claimed by both Pakistan and India.

He rejected New Delhi's claim that the changes were its internal matter and that Islamabad should reconsider its expulsion of India's ambassador and suspension of trade and a key train service.

He said Pakistan might review its steps if New Delhi also agrees to do the same about its changes in Kashmir.

Pakistan says it has suspended a key train service with neighboring India over change in Kashmir's special status by New Delhi.

The latest move comes a day after Pakistan downgraded its diplomatic ties with India and suspended trade in response to New Delhi's decision to reduce the special status of Kashmir, a Himalayan region claimed by both countries.

The railway suspension announcement was made as passengers were waiting to board a train in the eastern city of Lahore to travel to India.

An opposition activist has filed a petition in India's top court challenging the communications blackout and security clampdown in the Indian-controlled portion of Kashmir, where people remained holed up in their homes for a fourth day.

State-run All India Radio says security agencies have arrested more than 500 people in the region apparently to prevent any outbreak of violence.

India's government this week revoked the special status of Jammu and Kashmir and downgraded the Himalayan region from statehood to a territory. Muslim-majority Kashmir is claimed in full by both India and Pakistan, and rebels have been fighting Indian rule in the portion it administers for decades.

SRINAGAR, India (AP) -  Tens of thousands of government forces in riot gear patrol Indian-controlled Kashmir. Streets lined with shuttered shops are deserted, steel barricades and razor wire cutting off neighborhoods. An eerie silence is broken by an occasional security vehicle whizzing past or the cawing of crows.

An unprecedented security lockdown amid a near-total communications blackout entered a fourth day Thursday, forcing some news organizations to hand-carry dispatches out of the region.

The lives of millions in India's only Muslim-majority region have been upended since the latest - and most serious - crackdown followed a decision by New Delhi to revoke the special status of Jammu and Kashmir and downgrade the Himalayan region from statehood to a territory. Kashmir is claimed in full by both India and Pakistan, and rebels have been fighting Indian rule in the portion it administers for decades.

In central Srinagar, the region's main city, few pedestrians ventured out of their homes to navigate barbed-wire checkpoints guarded by helmeted soldiers in camouflage, wielding rifles and protective shields.

Shopping malls, grocery stores and even clinics were closed. In previous security clampdowns, neighborhood bodegas had opened their doors for a few hours a day after dark so that people could buy necessities like milk, grains and baby food. It is not clear whether the stores have opened in the current crackdown. Residents are used to stockpiling essentials, a practice they've honed during harsh winter months when roads and communications lines are often snapped.

The communication blackout - with landlines, cellphones and internet all down - means that people within Kashmir can't call one another or speak to friends and relatives outside the region, relying only on limited cable TV and local radio reports.

In a nationally broadcast address Thursday night, Prime Minister Narendra Modi said his government made the move to free the region of "terrorism and separatism." He added that the situation will soon "return to normal gradually," although he gave no specifics.

At the Shri Maharaja Hari Singh hospital in Srinagar, doctors told The Associated Press on Thursday that at least 50 people had come in with wounds from pellet guns and rubber bullets, the ammunition security forces often use to disperse protests.

Razir Mir, 32, described hearing a loud bang on Monday and opening his front door to find his wife, Rabiya, "face down on the street. Blood was pouring from her eyes," he said.

Rabiya, who was left with blurred vision, said that after hearing the government's announcement that Kashmir's special status had been stripped, she thought to buy vegetables, anticipating a long curfew period in Srinagar.

"The moment I came out from my house, the soldiers out there shot at my direction," she said, as the couple's 2-year-old cried.

Rubeena Mehraj from central Kashmir was convalescing at the hospital after giving birth.

"When I called for an ambulance, I started traveling to Srinagar because I was expecting, but the ambulance was stopped at so many (checkpoints) along the route that I gave birth inside the vehicle," Mehraj said.

Outside the busy hospital, people struggled to communicate with family and neighbors.

A woman peering out of a window asked a group of reporters if they could find out about a sick person from a family living nearby. "We've no contact," the middle-aged woman said before she could give her name as soldiers ordered journalists to move on.

No news was coming out from elsewhere in the tense region.

Police and paramilitary officials enforcing the restrictions said they were clueless about how long the curfew would continue. "We know only about what's going on in the street we're deployed. We don't know how it is in the next street," said a police official in Srinagar's city center who could not be named in accordance with standard practice.

No official briefings for journalists were held nor curfew passes issued to any, a departure from previous security clampdowns.

Many local police officials expressed fury that they were left out of any decision-making, ratcheting up friction between local Kashmiri police and Indian soldiers on the ground.

On Sunday, in the run-up to India's decision to revoke Kashmir's autonomy, the top commander of the largest rebel group, Reyaz Naikoo, in an audio statement called local police to "redeem" themselves by refusing to enforce New Delhi's orders.

"India can make changes on paper, but they can't change our sentiments for freedom," said Naikoo, the operations commander of Hizbul Mujahideen. "India has embarked upon plans to change Kashmir's demography, but India is fighting a lost war. They're here by deceit and deception."

Kashmir's fury at Indian rule is nothing new. Its roots lie in a broken promise of a U.N.-administered referendum guaranteed shortly after India and Pakistan gained independence from Britain in 1947. The nuclear-armed neighbors have been unable to resolve their competing claims on the mountain territory divided between them.

The Indian side has experienced several separatist movements since then, including a bloody rebellion begun in 1989 to demand independence or a merger with Pakistan. Over 70,000 people have been killed in the uprising and the subsequent brutal military crackdown.