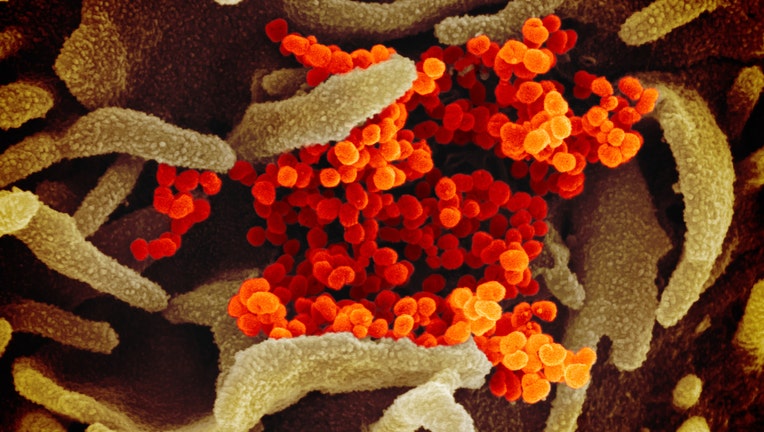 This scanning electron microscope image shows SARS-CoV-2 -also known as 2019-nCoV, the virus that causes COVID-19-isolated from a patient in the U.S., emerging from the surface of cells cultured in the lab. (Photo by: IMAGE POINT FR - LPN/BSIP/Universal Images Group via Getty Images)

AUSTIN, Texas - Texas surpassed 500,000 confirmed coronavirus cases Tuesday as Republican Gov. Greg Abbott suggested family and neighborhood gatherings are behind a sharp rise in the rate of positive tests, which has climbed to record levels just as schools are beginning to reopen across the state.

He also continued to say more testing in Texas is likely after dropping off in recent weeks, a trend seen across the U.S. even as deaths mount. Texas has reported more than 1,400 new deaths over the past week, including 220 on Tuesday.

Although health officials say there are encouraging signs in Texas — particularly hospitalization levels that have dropped more than 30 percent since July’s peak — infection rates have been on a steady increase. On Tuesday, the rolling average of positive cases over the past seven days jumped to 24%, by far the highest of the pandemic, according to figures from the state Department of Health Services.

“There’s a reason why this is happening, I believe, and that is some people feel if they’re just with family members” they can let their guard down, Abbott told reporters in Victoria, which had a surge of cases in July. “And that turns out not to be the case.”

The rising infection rate comes as testing in Texas has plummeted, with the seven-day average dropping below 30,000 on Tuesday for the first time since June, according to state figures. Abbott said higher testing in July was the result of “surge testing” in hot spots and nursing homes and suggested more would come, including 50,000 additional tests in Harris County starting this week.

In Austin, health officials say testing has fallen off dramatically from more than 6,000 a week in July, but said the reason was a decrease in demand. Widespread testing is considered essential to managing the outbreak as the U.S. surpassed 5 million confirmed infections this month.

Some of the decline in testing over the past few weeks nationwide was expected after backlogged commercial labs urged doctors to concentrate on their highest-risk patients. But some health and government officials have seeing growing public frustration over wait times and waning demand

“We are seeing what is being seen in many parts of the country right now and that’s a significant decrease in the testing that’s being done,” said Mark Escott, the Austin-Travis County interim health authority. “This is not because tests are not available, it’s because less individuals are signing up for testing."