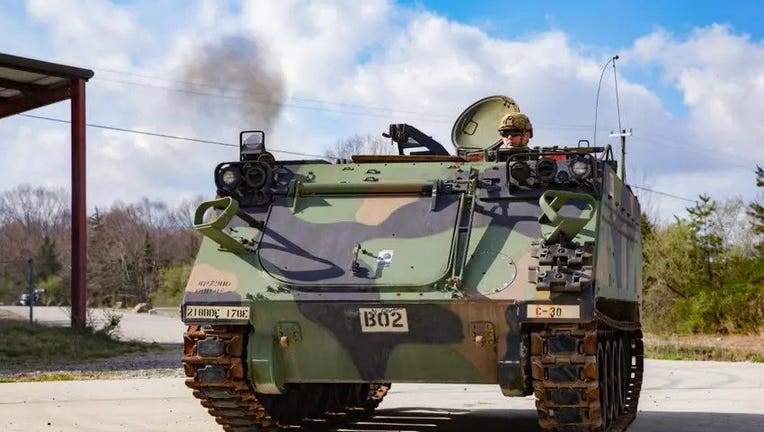 Three days after Gov. Greg Abbott tweeted a legally dubious invocation of the "invasion clause" of the U.S. and Texas constitutions over the high number of migrant encounters at the Texas-Mexico border, his border mission is set to include armored personnel carriers designed to carry troops into battle alongside tanks, according to a planning document obtained by Army Times and The Texas Tribune.

According to the order, around 50 soldiers will be trained to operate the vehicles, and state officials will identify 10 positions to station them along the border.

As the migrant surge continues, officials with the Texas Department of Public Safety showed just how serious and out of control the immigration crisis is at the U.S. Mexico Border.

The Texas Military Department said in a written statement Friday that in addition to the 10 armored vehicles, the Texas National Guard is increasing "aircraft flights and security efforts" on the border.

"These actions are part of a larger strategy to use every available tool to fight back against the record-breaking level of illegal immigration," the department said. "The Texas National Guard is taking unprecedented measures to safeguard our border and to repel and turn-back immigrants trying to cross the border illegally."

Abbott’s office did not immediately respond to requests for comment.

Abbott launched Operation Lone Star in March 2021, sending thousands of soldiers and Texas Department of Public Safety troopers to the border while accusing the Biden administration of failing to secure the border. The effort has included placing shipping containers and rows of DPS and military vehicles along the Rio Grande to deter migrants from crossing, plus using state money and donations to build border barriers.

Armored personnel carriers like the M113 are designed to carry infantry troops across modern battlefields alongside tanks. They can be equipped with a range of weapons: heavy machine guns, grenade launchers, antitank missiles or even large cannons similar to those mounted on tanks. It’s not clear what weapons, if any, will be on the Texas Guard’s M113s at the border.

Such vehicles are by definition bulletproof and can withstand small explosions. In the civilian world, lighter, wheeled armored personnel carriers are sometimes used to carry police SWAT teams.

From the Texas border to NYC

Lovingly known as the "battle taxi" by Army troops, the Vietnam-era M113 features tracks instead of wheels, leading observers to sometimes confuse them for tanks. Tracks allow heavy armored vehicles to traverse difficult terrain — such as ditches or muddy areas — with a lower risk of becoming stuck.

The U.S. has sent 200 of the aging vehicles to Ukraine to support that country’s fight against invading Russians.

It’s not clear why the Texas Military Department plans to deploy the vehicles to the border. Since Operation Lone Star began, the agency has not publicly acknowledged any incidents in which the protection provided by the more nimble Humvee vehicles deployed there was inadequate.

The move didn’t surprise Fernando García, the executive director and founder of the Border Network for Human Rights, who said Abbott is "trying to justify the narrative of the invasion" by casting asylum seekers and migrants seeking opportunities as violent criminals.

"For [Abbott] it’s easy to say there’s an invasion, and send troops to the border with a potential consequence of a major situation of human rights violations," García said.

Since Operation Lone Star began, the number of migrants apprehended along the Texas-Mexico border has increased despite the expenditure of $4 billion and the involuntary deployment of up to 6,500 Texas Military Department troops.

The What's Your Point panel discusses Texas and others bussing migrants to other parts of the country.

The news organizations revealed these issues in a series of stories scrutinizing the mission’s hasty mobilization process, how agency leaders ignored the results of a feedback survey and its budget overruns.

In recent months, the military department has taken steps to address soldiers’ concerns and slowly reduced the number of troops on the border. Three of the department’s top leaders also abruptly departed the agency in March and April.

Ten soldiers linked to the mission have died since September 2021, all via accident or suicide.

This article is co-published and co-reported with Military Times, an independent news organization reporting on issues important to the U.S. military. Sign up for its daily Early Bird Brief newsletter here.