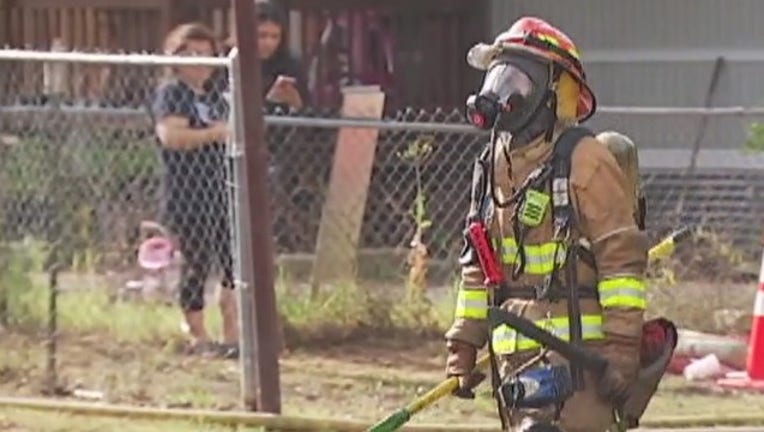 HOUSTON (AP) - Many Texas cities are denying workers' compensation to firefighters with cancer, according to union leaders and state lawmakers.

Over the past six years, more than 90 percent of the 117 workers compensation claims filed by Texas firefighters with cancer have been denied, according to the Texas Department of Insurance. Cities are ignoring a 2005 state law requiring the government to presume that firefighters' cancers are caused by exposure to carcinogens on the job, union officials told the Houston Chronicle.

"The sky-high denial rate of cancer is the first problem," said Marty Lancton, president of the Houston Professional Fire Fighters Association. "Firefighters with denied claims often have fewer treatment options and face the risk of financial ruin because of lost income."

All seven of the association's members who filed workers' compensation claims since 2016 have been denied, the union said.

Houston's benefits provider didn't respond for comment. But firefighters have said that cities use a memo by the Texas Intergovernmental Risk Pool to dodge the cancer presumptive law. The memo only presumes three types of cancer are caused by firefighting: testicular, prostate and non-Hodgkin's lymphoma.

"It's not that we're not sympathetic to firefighters. We are," said Counsel David Reagan of the risk pool, which handles workers' compensation for more than 2,700 Texas municipalities. "But at the same time, we have to follow the law in spending taxpayer money."

Union leaders have said that the memo and the risk pool ignore substantial research linking firefighting to other forms of cancer.

Firefighters are much more likely to win benefits on appeal, with nearly 65 percent of cases winning workers' compensation appeals over the past six years. But less than one-fifth of firefighters disputed their denied claims. Firefighters risk being sued by the cities that employ them, and often it's too daunting a task to battle in court while battling cancer.

Houston sued Margaret Roberts in 2015 after she appealed and won a workers' compensation claim for her blood and bone cancer. The Houston Fire Department veteran of 23 years died in 2017, but the city's lawsuit against her estate is ongoing.

Republican Rep. Dustin Burrows sponsored a bill to allow workers to challenge bad faith claim denials this past session, but it died in the Senate. Burrows plans to try again next January.

Read New standards to combat the invisible danger to firefighters

"I am very, very, disappointed in what I'm seeing," Burrows said. "I think there is a really strong argument that's what's going on here . that maybe they're making economic decisions rather than actually contractually living up to their obligations."