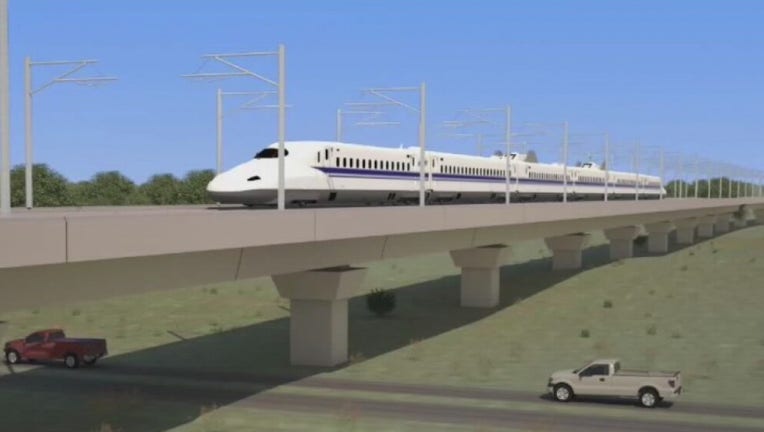 DALLAS - The developer of a long-planned — and controversial — high-speed rail line that would get passengers from Dallas to Houston in 90 minutes announced Tuesday that it signed a $16 billion contract with an Italian company to build the project, in what could be a step toward realization.

Webuild, based in Milan, will oversee heavy construction of the planned 236-mile (380-kilometer) project for developer Texas Central, the companies said in a news release. Webuild will operate through U.S. subsidiary Cheshire, Connecticut-based Lane Construction Corporation.

Nearly half the distance the bullet train will cover — at speeds up to 200-mph (320-kph) — will be elevated to reduce the impact on property owners, the companies said.

Residents have fought the high-speed train, which has been discussed for decades and would rely on acquiring land through eminent domain to construct the rail line. Trey Duhon, who heads a group called Texans Against High-Speed Rail, criticized Tuesday’s announcement, saying it was just the developer continuing to try to drum up support for an unpopular project.

RELATED: Houston to Dallas in 90 minutes: Will the bullet train ever happen?

"Texas Central takes every opportunity to generate what sounds like progress to keep interest and investments alive," said Duhon, who also is the highest-ranking elected official in Waller County, outside Houston. "Texas Central has been reporting that construction will begin ‘within the next six months,’ ‘later this year’ or ‘soon’ for the last five years."

"Being part of such a challenging project as leader of the design and construction of the railway is a unique experience that we are extremely proud of," Salini said.

Webuild was created in 2020 from Salini Impregilo, a leading player in major infrastructure projects that acquired Lane in 2016 and more recently Italy’s Astaldi engineering firm. Building the project will employ 17,000 people directly, Webuild said. The rail link itself would use Japanese bullet train technology and would employ 1,500 people once completed.