TAMPA, Fla. - A Tampa teen has won her appeal in district court for the right to talk to a doctor about, and ultimately have a medical abortion.

Florida law requires those under 18 to have parental consent before talking to a doctor about the medial abortion pill and having the pill administered. According to court records, the Tampa teen said she knew her parents would not give their consent, so she petitioned for a judicial bypass to have access to information about the medical abortion pill and the ability to be administered the pill if she decided to do so.

Identified in court records as Jane Doe, the teen's original petition to the court for a judicial bypass was denied, in part, because she did not meet the judge's intellectual standards.

The teen's attorney, Rinky Parwani, explained to the court that the 17-year-old Tampa high school junior works, pays for things she wants and needs (outside basic necessities provided by her father and sole caregiver, according to court records), and that she wants an abortion because she isn't yet financially stable.

He says his client wants to enlist in the military before going to college and becoming a nurse.

"That is huge for these ladies that petition the court for this," said Parwani. "They do have futures, they understand that having a child may limit those futures in different ways." 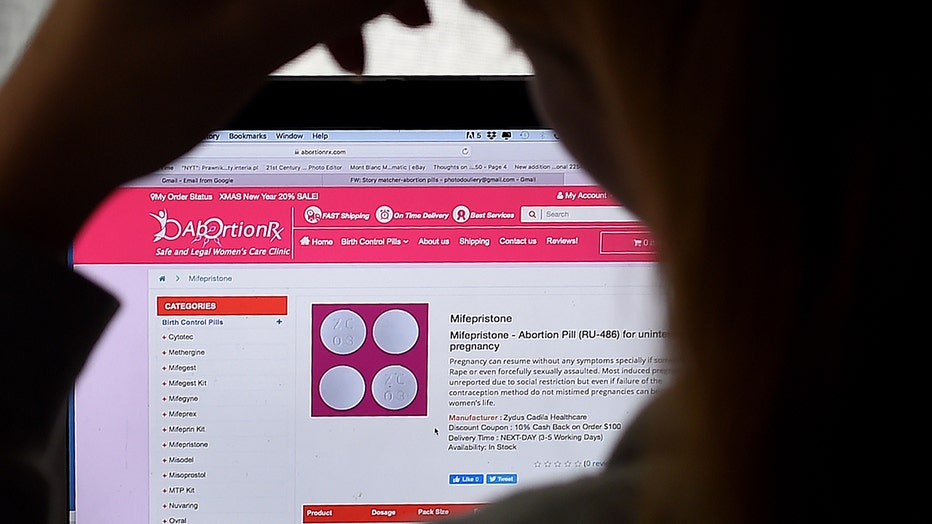 In this photo illustration, a person looks at an Abortion Pill (RU-486) for unintended pregnancy from Mifepristone displayed on a computer on May 8, 2020, in Arlington, Virginia. - One week after Sally realized she was pregnant, her home state Texas

When considering a judicial bypass, a judge is to consider seven factors regarding the petitioner, including "overall intelligence; emotional development and stability; credibility and demeanor as a witness; ability to accept responsibility; ability to assess both the immediate and long-range consequences of the minor’s choices; and ability to understand and explain the medical risks of terminating her pregnancy and to apply that understanding to her decision."

Judge Jared Smith denied her request, citing concerns she wasn't being forthcoming about her GPA.

An excerpt from the appeal reads:

In the present case, the circuit court noted that the Petitioner is seventeen years old. However, addressing her "overall intelligence," the court found her intelligence to be less than average because "[w]hile she claimed that her grades were 'Bs' during her testimony, her GPA is currently 2.0. Clearly, a 'B' average would not equate to a 2.0 GPA." The court reasoned, "Petitioner's testimony evinces either a lack of intelligence or credibility, either of which weigh against a finding of maturity pursuant to the statute."

Upon appeal, however, Judge Darryl Casanueva wrote for the 2-1 majority, "The petitioner's testimony demonstrates that she possesses an ability to assess the consequences of her choice and the risk it entails, as well as the intention to reassess her decision after consultation with her physician."

Because records are sealed, it's unclear how many Florida teens petition for or win the right to have an abortion without parental consent, as required under a law passed in 2020.

The upcoming decision expected from the Supreme Court of the United States could lead states to leave these kinds of laws in place, or for legislatures to alter them.

"If she doesn't have a fundamental right to an abortion at all, then there is no reason to have these bypasses or anything else," said Dan Eaton, a legal analyst and attorney in San Diego.

For now, Tampa Jane Doe told the court that she will gather the information on the procedure and if she goes through with it, her boyfriend will drive her to the clinic and that his mother will pay for the procedure. She said if she has any physical or mental impacts from the procedure, she said her boyfriend, his mother, and a friend are there to help her through the ordeal.

"Any young teenage girl who is pregnant is already going through a huge emotional burden," Parwani added. "What is really fundamental in this decision is the court understood that she had resources available to her to make the right decision."

The decision is now for Jane Doe to make.