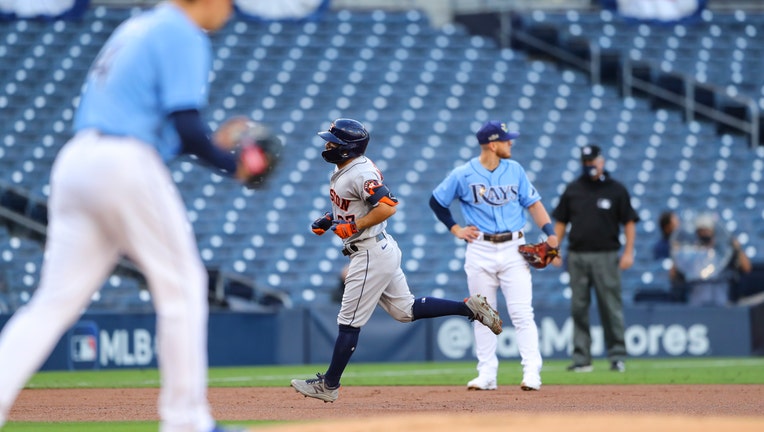 SAN DIEGO, CA - OCTOBER 11: Jose Altuve #27 of the Houston Astros rounds third base after hitting a solo home run in the first inning during Game 1 of the ALCS between the Tampa Bay Rays and the Houston Astros at Petco Park on Sunday, October 11, 202 (Photo by Alex Trautwig/MLB Photos via Getty Images)

SAN DIEGO - After the Houston Astros bashed the ball all over Dodger Stadium for the past week, they found it a whole lot harder to slug when they moved a couple of hours down the coast for the AL Championship Series.

Tampa Bay limited the Astros’ star-studded lineup to nine hits — but just one for extra bases — in the Rays’ 2-1 victory to open the ALCS at Petco Park on Sunday night.

The Houston offense that set off postseason fireworks against Minnesota and Oakland was a dull squib in San Diego — at least after José Altuve’s first-inning homer, the Astros’ 14th long ball of these playoffs and their 13th in the last five games.

The Astros got no more big hits against Blake Snell and the Rays’ justifiably vaunted bullpen. They mounted significant rallies in five different innings, but repeatedly failed to get the key knock that would have turned a tight game into something more comfortable for the defending AL champions.

“It’s disappointing, but those guys have a good pitching staff,” Houston manager Dusty Baker said. “We hit some balls good, and we threatened. Opportunity is the name of the game. If you keep getting opportunities, sooner or later you’re going to come through. We had a heck of an opportunity tonight, but they just got away.”

Alex Bregman, Carlos Correa and the Astros left 10 men on base in the opener, going just 2 for 8 with runners in scoring position but driving in no runs with those two hits.

Houston scored 33 runs in four games while knocking AL West champion Oakland out of the Division Series in Chavez Ravine last week, even batting .333 with runners in scoring position against the A’s.

RELATED: ALCS will be 'surreal' for Astros GM James Click

It’s much too early in the series for the Astros to feel anything is wrong with their offense. In fact, Alex Bregman felt quite good about Game 1, other than the result.

“We were hitting the ball hard, hitting line drives,” said Bregman, who went 2 for 4. “I think we didn’t punch out a lot at all. I thought the at-bats were awesome. Just didn’t get that big hit today. That’s baseball. Keep putting up those good at-bats, and I like our chances.”

But with big scoring opportunities in the final two innings of the ALCS opener, the Astros couldn’t capitalize — and the last two hurt the most.

Yuli Gurriel grounded into a first-pitch double play with the bases loaded to end the eighth inning against Diego Castillo, extending Gurriel’s alarming playoff slump to 2 for 25.

“Law of averages is on his side,” Baker said of Gurriel, a career .287 hitter. “This guy is too good of a hitter not to (recover). Everybody in the dugout knew he was going to get at least a sacrifice fly or a base hit. It’s driving him crazy, because he’s not used to struggling like this. We’ve just got to keep believing in Yuli.”

Pinch-hitter Josh Reddick then singled in the ninth, but George Springer and Altuve failed to bring him home, with Castillo striking out Altuve with Reddick on second base to end it.

Houston’s bats came into San Diego averaging 6.67 runs and just under 10 hits per game in these playoffs, which they only reached after a mediocre regular season in which they were in the middle of the major league pack in nearly all statistical categories.

The Astros led the AL in batting average, on-base percentage and slugging percentage in 2019, but they appeared to be taking a step back from the spectacular level of offensive play that got them to two AL pennants in three years. Three-time AL batting champion Altuve’s average shrunk to .219 in the regular season, while Bregman and Gurriel also hit significantly below their previous statistical standards.

But after grinding out two wins over favored Minnesota in the wild-card round, the Astros rediscovered a huge offensive groove against the A’s.

Just as quickly, they lost it against the Rays, whose pitching staff is fresh off a grinding five-game victory over the Yankees’ power-packed lineup.

The Astros scored first in all four games against Oakland in the ALDS, and they did it again in Game 1 of the ALCS. Altuve mashed a high 2-1 fastball from Snell in the first inning for his third homer of this postseason.

Houston got back-to-back singles in the third, but Springer got caught stealing to quell the rally. The Astros got two more hits and two walks in the fourth, but a double play slowed the rally before it ended on a fly by Martin Maldonado, who struggled at the plate all year long.

Snell allowed six hits and two walks, but only one run.

“He threw a lot of pitches,” Baker said. “He just got off. We hit some balls good. ... It hurts to lose these one-run games. They’re good in one-run games, but I just knew we were going to pull it out.”

Tampa Bay also used gimmicks in its quest to slow the Astros: The Rays employed a four-man outfield in the sixth inning against Bregman, who still hit a leadoff single to right. Three Houston baserunners in the sixth didn’t make it to third base.

Michael Brantley was on second base in the eighth when Kyle Tucker singled off seldom-used reliever Aaron Loup, but Tucker hit the ball so hard — 108 mph off the bat — that Brantley didn’t have time to get around third and score. Castillo took over and induced the inning-ending groundout by Gurriel.

“Nobody could have scored on that ball,” Baker said. “He hit it too hard, if there is such a thing.”