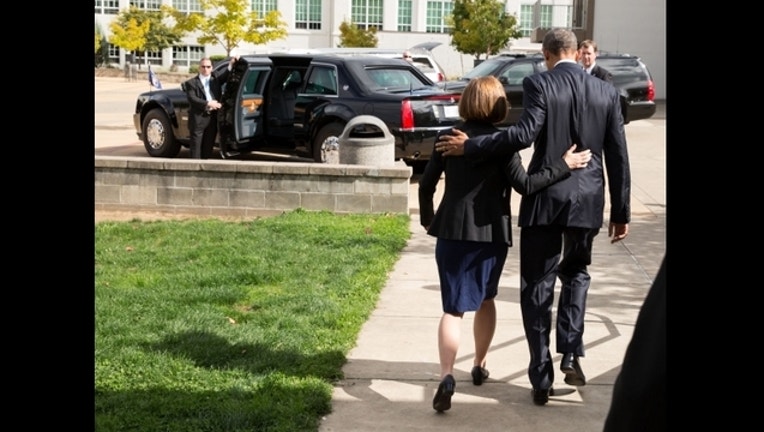 President Barack Obama walks to the motorcade with Oregon Gov. Kate Brown after visiting families of the victims of the mass shooting in Roseburg, Ore. on Oct. 9, 2015. (Official White House Photo by Pete Souza)

ROSEBURG, Ore. (AP) — Gun-rights activists and others gave voice to strong emotions when President Barack Obama came to meet privately with grieving families whose loved ones were killed on a college campus in Roseburg, Oregon.

During Obama's brief visit on Friday, many residents showed anger over the call he made soon after last week's shootings for more gun restrictions.

However, there were also Obama supporters among the people waiting behind a security fence near the airport to catch a glimpse of the president.

"I want to support our president," said Benedetti, a Roseburg physician. "This isn't about gun control, it's about caring about the welfare of the small town and every small town when tragedy happens."

He said he owns several guns for hunting and chasing deer from his garden, but he believes assault weapons shouldn't be available to the general public.

"I'm here to tell Obama he is not welcome in our county. He is exploiting the local tragedy with his gun control agenda," said Bruce Rester, a retired truck driver who was wearing a handgun in a holster over his chest. "Everybody should carry a gun. An armed society is a polite society."

As Roseburg buries its dead, it's also trying to heal. The complexities of residents' emotions were reflected in the signs that are everywhere around the community — at fast-food places, cafes and churches.

Some have messages like "Pray for UCC" and "UCC Strong."

The signs refer to Umpqua Community College, where Christopher Harper-Mercer killed eight students and a teacher before turning the gun on himself after a shootout with police.

Billie McMillian, a business owner from Eagle Point who attended the protest with her husband, said they came to support the families of the victims and because they didn't agree with the president.

"We support the Second Amendment. It's our God-given right to protect ourselves," she said.

Protesters also carried signs voicing support for Sheriff John Hanlin, who has been highly visible during press conferences about the college shooting.

Three years ago, after 20 children and six adults were shot dead at Sandy Hook Elementary School in Newtown, Connecticut, Hanlin sent a letter to Vice President Joe Biden saying he would not enforce any new gun legislation he deemed to be unconstitutional.

Poole, a retired property developer from Klamath Falls, said he too believes in the Second Amendment right to carry arms, but he also supports "rational, common sense gun laws."

Funerals for the nine victims of Harper-Mercer have been held throughout the week, and more were scheduled in the days ahead.

The college reopened Monday, and counselors have been on campus to help students, faculty and staff deal with the trauma that all of Roseburg is feeling. Grief counselors are also available at nonprofit organizations.

During his visit to Roseburg, the president met with leaders of the community college to express his thanks and condolences.

Obama made no public appearances during his visit to the city. It is not known what Obama told the families of those killed in the campus killings.

Just before leaving Roseburg, he told a small group of reporters: "We're going to have to come together as a country, but today is about the families."