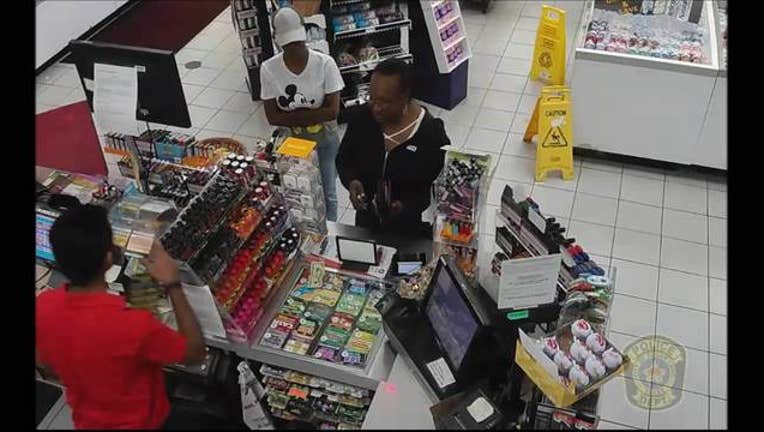 A woman told police she placed her wallet containing cash and credits cards on a counter while working at Dillard's on April 10 at 12:30 p.m.  She was unable to locate the wallet 30 minutes later.

Her bank card was used to make unauthorized purchases at Walmart, 345 Highway 6, at 3:30 p.m. the same day.  She contacted police on April 18. Police reviewed surveillance video at Walmart and saw a black female wearing a blonde wig, glasses, a beige shirt and tan pants use the stolen credit card.  The suspect was accompanied by another black female wearing a beanie hat, glasses and a blue/white shirt with the number "88."  They exited the store and left in a grey, four-door Mercedes.

Another woman told police she placed her purse containing a bank card, credit cards and other personal items in a cabinet under a register while working at Macy's on April 18. Her bank notified her about suspicious activity on her card at 9 p.m. She returned to the cabinet, and her purse was gone.  She later discovered her card was used at a Shell gas station, 1484 State Highway 6.  A review of surveillance video from Shell showed two woman using the stolen card. One of the women was also seen on video using a stolen card at Walmart.

A third woman told police she arrived to work at Chico`s on April 19 at 1 p.m.  She placed a purse containing cash, credit cards and other personal items in an unsecured locker.  Her husband contacted her later that evening to report unauthorized purchases that were made with one of her cards, including one at Target, 16300 Southwest Freeway.  She returned to the locker and her purse was missing.

A review of surveillance footage at Target showed two women using the stolen card.  They were the same two suspects who used a stolen card at Walmart.