LOS ANGELES - Steve Irwin's wife and children posted loving tributes to the late "Crocodile Hunter" on what would have been his 58th birthday Saturday.

Terri Irwin marked the day with a moving tweet containing photos of Steve, calling him her "best friend" and the "best dad."

"While my heart aches missing him every day, I'm determined to celebrate what he loved the most," Terri wrote, in part. "He was happiest spending time @AustraliaZoo w/ @BindiIrwin & @RobertIrwin." She ended the emotional tweet with a simple "I love you."

Steve Irwin's daughter, Bindi, posted a photo of herself as a child, smiling alongside Steve, who held a small creature in his hand.

"Dad, Today is your birthday. I had an extra strong cup of tea just how you liked it," Bindi wrote. "I hugged Mum for you and told her how much we love her. Robert and I went on a hike through the mountains you cherished. I watched one of your documentaries with Chandler and shared stories about you. I walked through your office in the zoo and smiled at our old family photographs. Today and every day I miss you and love you beyond description. You’re always with me."

The Australia Zoo, which Steve founded, responded to Bindi's tribute to her late father, saying, "Absolutely beautiful. His legacy will always live on in you guys." The zoo also posted its own photo of Steve with a bird perched atop his hand to mark the day, and pledged to continue his "incredible work" alongside Terri and his children.

Robert Irwin, Steve's son, posted a black-and-white photo of his entire family with Steve, along with a simple caption that read, "Family Always."

Steve Irwin, who was known worldwide as "The Crocodile Hunter" after achieving fame through an eponymous television show, died on Sept. 4, 2006 while filming a documentary off the coast of Australia. His death was caused by a stingray barb, which was lodged in his chest while he was in the water. He was 44. 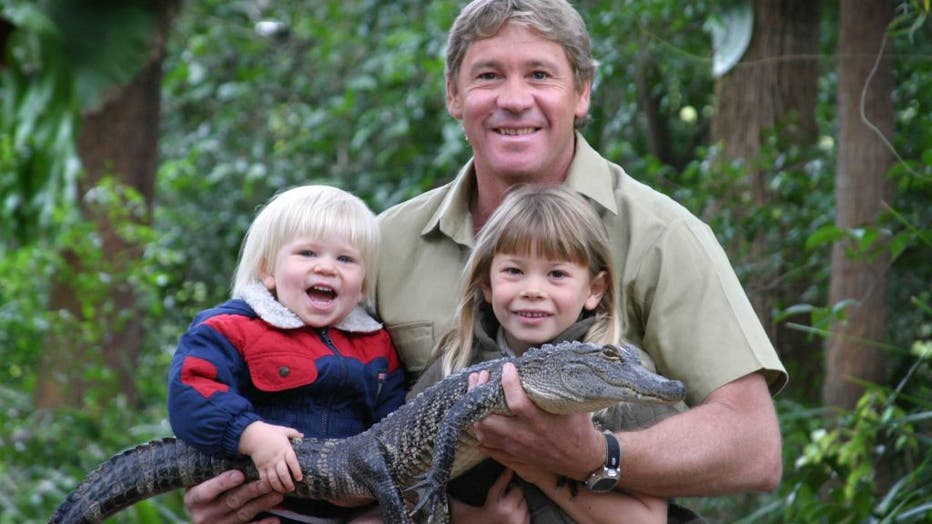 FILE - Robert, Steve and Bindi Irwin pose with alligator Russ at the Australia Zoo on June 25, 2005 on the Sunshine Coast in Australia. (Photo by Megan Slade/Newspix/Getty Images)

Irwin was an avid and outspoken conservationist, whose wild adventures and utterances of his down-under catchphrase, "Crikey!" onscreen captivated millions.

News of his sudden and unexpected death left fans around the world in disbelief. His cameraman, Justin Lyons, who was the only witness to the stingray attack that took Irwin's life, said in a 2014 interview with Australia news outlet Studio 10, “It was shocking. It was probably always going to be something weird with Steve... it would always be a crazy, silly accident. And as it turns out that’s exactly what it was.”