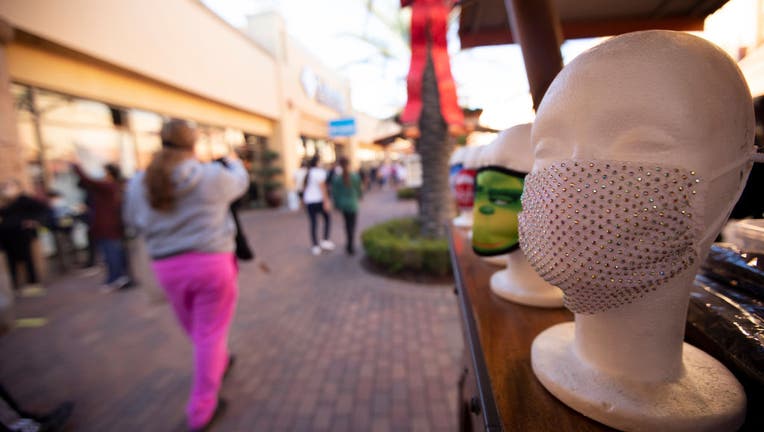 FILE - During the coronavirus pandemic facemasks are for sale at The Citadel Outlets in Commerce, CA on Saturday, Nov. 28, 2020.

SALT LAKE CITY - A recent study conducted by the University of Utah found that statewide mask mandates were better for the economy than mask mandates issued and enforced at the local level.

According to the study’s authors, Nathan Seegert, Maclean Gaulin, Mu-Jeung Yang, and Francisco Navarro-Sanchez, when a mask mandate is issued, consumer confidence grows overall as cases decrease due to the action, allowing residents to feel comfortable enough to go out and shop, stimulating the economy while still obeying the health guidelines.

But according to the researchers, mask mandates could have adverse economic effects when implemented locally — at the county level, for example — because residents in that county could be under the impression that infection rates in that concentrated area are worse than anywhere else, thus discouraging them from going out and causing an economic slump within a specific community, according to the study.

Researchers observed mask mandates in several states that were imposed at varying times between April and September and the correlation those mandates had on economic activity, which was tracked using “cellphone-GPS-based mobility data from Google and credit card transaction data from Safegraph/Facteus.”

RELATED: US economy sprints toward normal in 2021 but with coronavirus scars

Authors of the study posited that when local governments imposed mask mandates when they saw a spike in cases, it caused residents to correlate increased COVID-19 cases with mask mandates, which created a bias that masks don’t help slow the spread of the novel coronavirus.

Evidence shows masks may help avoid severe illness, even if you get COVID-19

Researchers and scientists are now learning that not only does wearing a mask reduce viral transmission, but it may also help you avoid major illness, even if you end up contracting the novel coronavirus.

According to the study’s findings, when statewide mask mandates were imposed, COVID-19 cases saw a dip, and the economy simultaneously saw a crescendo in spending and mobility. Researchers also found that the impacts of a statewide mandate saw lasting effects of up to two to three months.

“We find that a state mask mandate immediately reduces the growth of new cases and that this effect persists over the next 2–3 months. Ultimately, the mandate results in a reduction of 10 new cases per day per 100,000 people compared to before the mandate,” according to the study.

The impacts were not the same for countywide mask mandates.

According to the study, when local governments implemented mask mandates on their own, cases did decrease, but so did spending as well as general mobility.

“However, our findings suggest a key economic argument against county mask orders: they may decrease consumer confidence by revealing to people that the risk in their immediate neighborhood has increased. As a result, people reduce their mobility, spending, and demand for local businesses,” according to the study.

The University of Utah also noted a survey of 800 people conducted between October and November, which found that residents would be far more willing to go out if a statewide mask mandate was implemented, even if compliance could not be guaranteed.

Researchers noted that attempting to decrease COVID-19 cases with mandates as well as stimulating economic activity did not have to be substituted for one another — they can work hand-in-hand.

“Put differently, state mask mandates expand the policy frontier and show there is no conflict between public health and economic recovery,” the study stated.