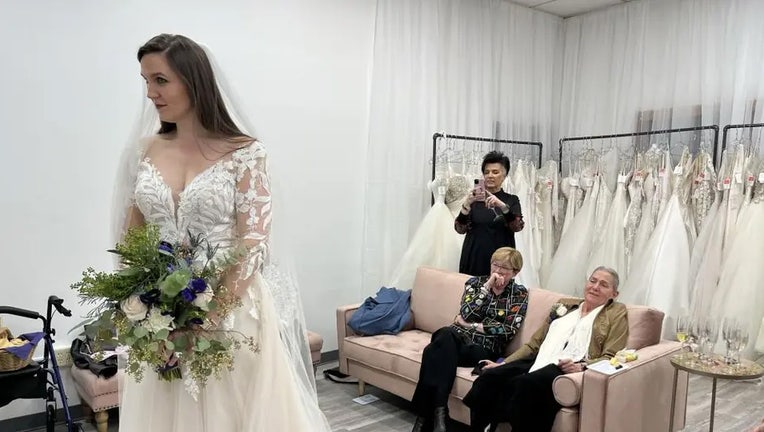 Christine Gilbert tried on several dresses in various bridal colors and styles, and she even held up a bouquet to complete each look. (Leslie Hargis)

BELLEVUE, Wash. - A woman surprised her beloved mother with a wedding dress party — even though the younger woman is currently single and has no plans to marry right now.

Her reasoning for this unusual gift of love for her mom is bittersweet.

Christine Gilbert of Bellevue, Washington, decided to organize a dress try-on event at a local bridal salon to lift her mother’s spirits. Her mom, Colleen Gilbert, has been living with a terminal brain cancer diagnosis for the last two years.

"I've been living here and have been a full-time caregiver [for her] ever since," Christine Gilbert told Fox News Digital in a phone interview.

MOM TAKES OUT BILLBOARD IN TIMES SQUARE: 'DATE MY DAUGHTER'

Gilbert noticed that her mom had been saying she wished she could see her daughter get married. 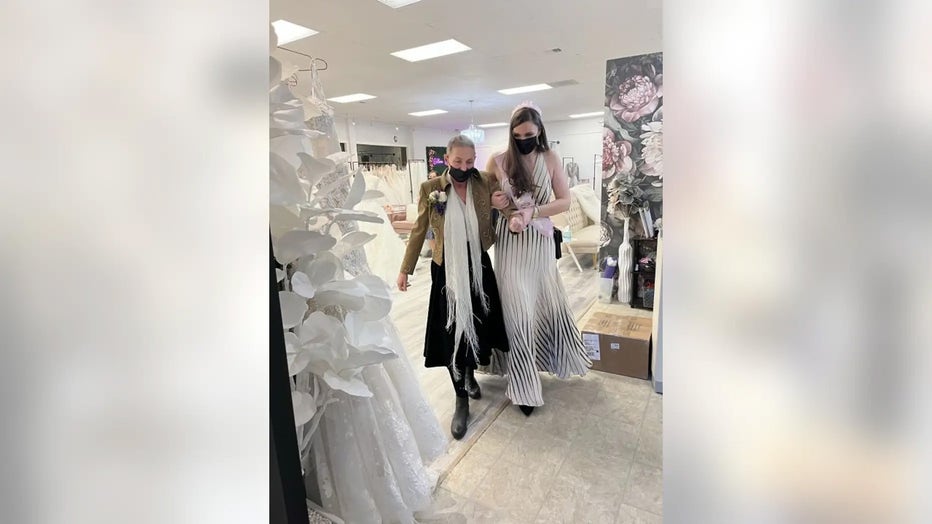 Christine Gilbert (right) surprised her mother, Colleen Gilbert (left), with a trip to a bridal salon so that she could see her daughter try on wedding dresses — even though the daughter is not yet getting married. (Leslie Hargis)

By the time February rolled around, the devoted daughter got the idea to go wedding dress shopping to make her mother’s wish come true — even if there was no groom-to-be in the picture.

Christine Gilbert rounded up family members and a group of her mother’s closest friends — and planned a special outing that resembled the typical steps for brides before a wedding.

"Doesn't every mom dream of seeing her girl in a wedding dress?"

"I ordered a limo, and then we booked a couple of different bridal salons," she said.

"It was on a Saturday, I think the week before Valentine's Day."

Christine Gilbert continued, "I got her dressed at like 2 p.m. and I said, ‘We're going to get dressed for Valentine's Day dinner, Mom.’ Luckily, she didn't really question it." 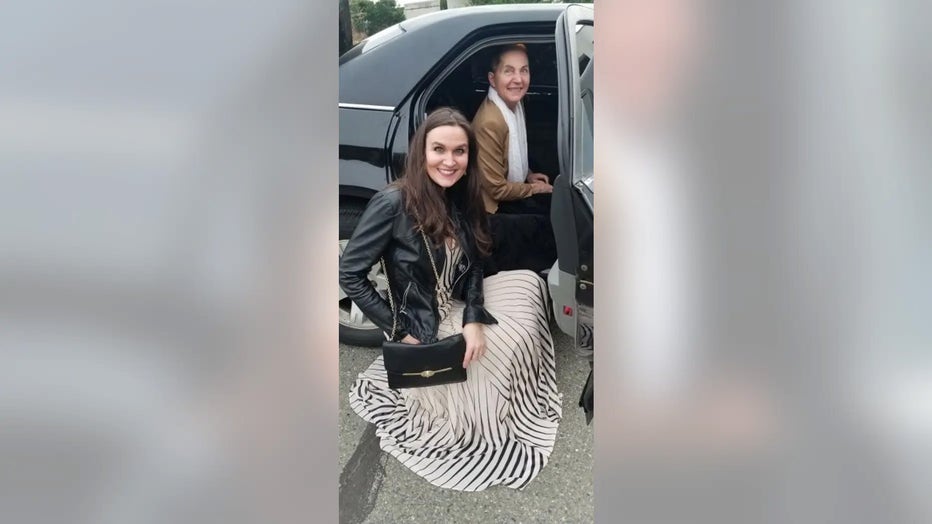 The limo took the pair to their local church, where they picked up the rest of their party, and that’s when Christine let her mother know what their true plans were.

"I finally said, ‘OK, Mom, we're going to go try on wedding dresses.’ And her mouth fell open in shock," Christine recalled. "I think it was very confusing." 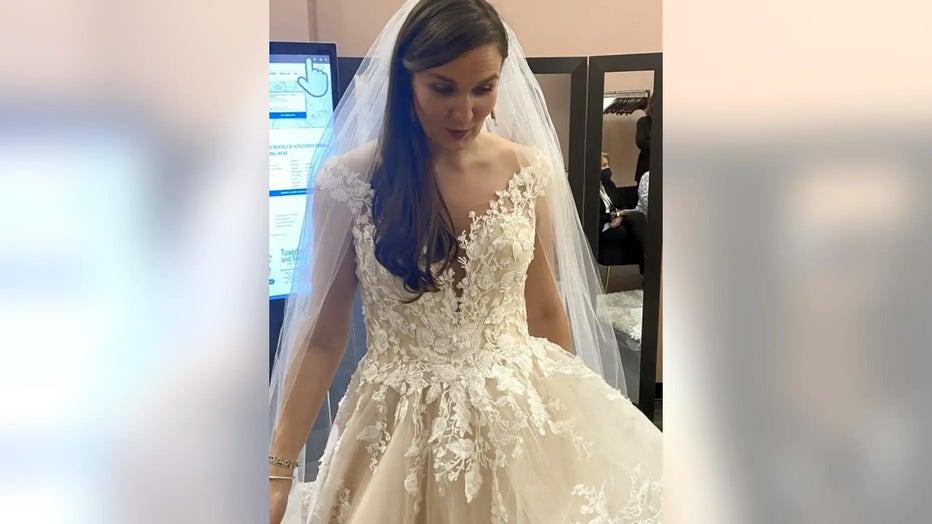 Christine Gilbert told Fox News Digital she was surprised by the rush of emotions as she tried on wedding dresses in front of her mother. (Jolanta Marchewka)

One of the two bridal salons they traveled to was a place called Kita Events Northwest Bridal & Formal Wear, in Edmonds, Washington. It's about 45 minutes away from where the Gilberts live.

But the trip was worth it, since the salon agreed to host the private party for free.

"It was a very full day … We just filled it with laughter, and I think that was how we were able to get through the day without getting too emotional."

Krista Larrison, the founder and event director of Kita Events, told Fox News Digital that she prioritized Christine Gilbert's wedding dress try-on party because caregiving is "near and dear" to her heart.

Larrison had provided care to her mother, who had dementia, for 11 years, so she was touched by the Gilbert mother-and-daughter story. 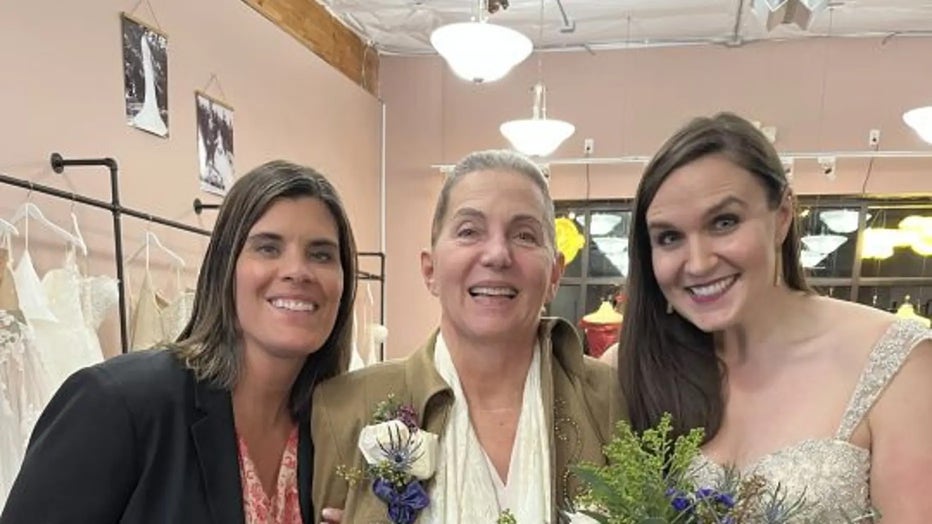 "As I have gotten to know Christine and Colleen, I realized how similar our stories are," Larrison wrote in an email.

"It is an honor and a privilege to not only support them but to be a member of this community."

At Kita Events, Christine Gilbert tried on several dresses in various bridal colors and styles, and she even held up a bouquet to complete each look.

"Doesn't every mom dream of seeing her girl in a wedding dress?" Colleen Gilbert, a mother of six, told Fox News Digital. 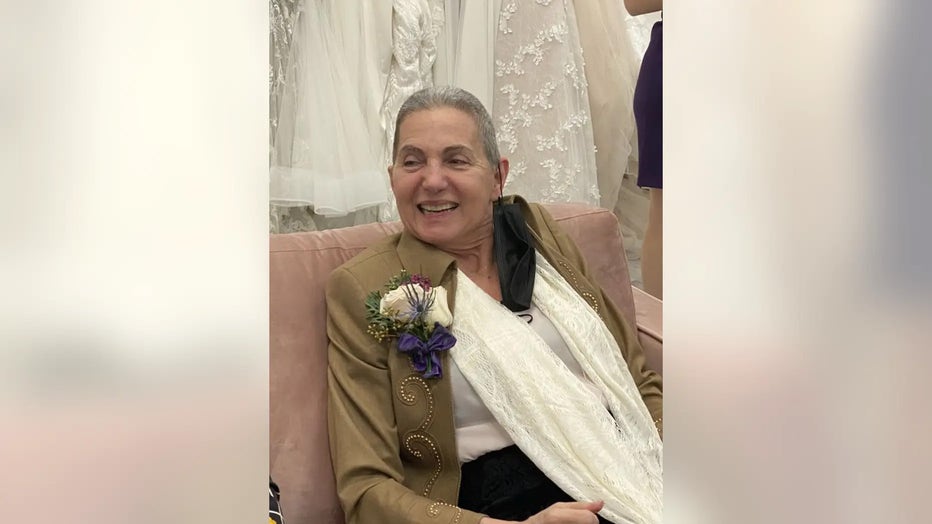 Colleen Gilbert told Fox News Digital that she felt blessed that her daughter put a wedding dress party together — and she appreciates that close family and friends got involved as well. (Jolanta Marchewka)

"It was a huge surprise to me. And all the women that were involved are such good friends or family. It was just fantastic," Colleen Gilbert continued.

"I just felt so blessed to be included in something like this because I really didn't think this was going to happen."

WOMAN'S LENGTHY, CONSIDERATE BRIDAL PARTY SURVEY GETS PRAISE: 'EVERY BRIDE SHOULD DO'

Christine Gilbert didn’t make an official purchase that day — but she did get an idea of which dress styles might work for a future wedding, if she meets the right person.

"We kind of indulged in several different types of fantasies, I would say," the daughter said. "I would try something on and go, ‘Oh, this is the Hawaiian beach dress when I get married by the sunset.' And another, we're like, ‘This is the Ralph Lauren equestrian wedding.’ And [for] another, I was like, ‘This is my Maria von Trapp dress where I’m going down the aisle as a duchess, and I'm marrying royalty in some sort of Irish castle.’"

Christine Gilbert tried on several dresses in various bridal colors and styles, and she even held up a bouquet to complete each look. (Leslie Hargis)

Though Christine Gilbert couldn’t pin down which dress was her favorite because "it really does depend on the time of year and location" of her prospective wedding — she and her mom did realize they like long veils and "poofy" ball gowns with long trains.

BRIDE SAYS YOU SHOULD KEEP YOUR WEDDING DRESS SECRET, HERE’S WHY

After they finished at the salon, the limo took mother and daughter and their wedding-dress party attendees to Carillion Point, a lakeside marina in Kirkland, Washington.

There, the group was met by family members and friends of the Gilberts — and the men all wore suits with matching purple bow ties, cummerbunds and flowers, "almost like a wedding party," Christine Gilbert said. 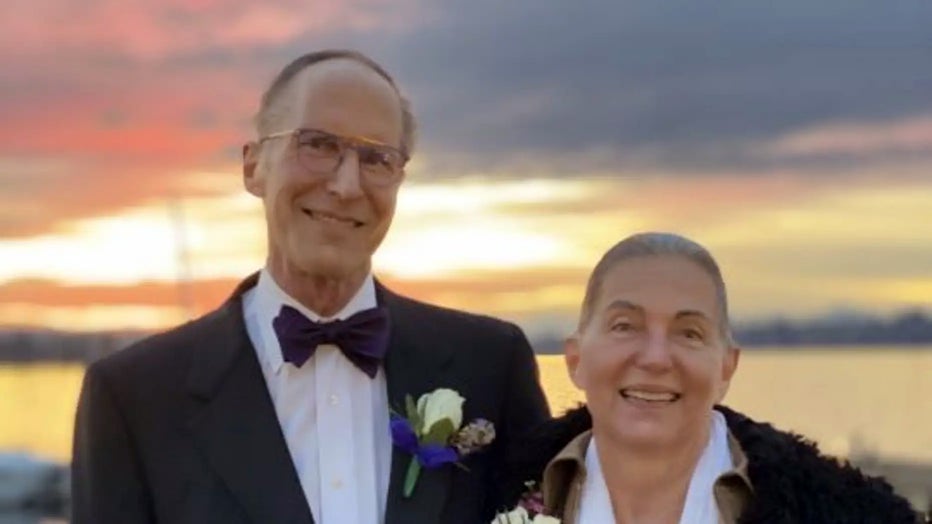 Michael and Colleen Gilbert of Bellevue, Washington, are the parents of six adult children. The pair stopped to take a sunset portrait at Carillion Point after the wedding dress parties. (Jolanta Marchewka)

Photos of the combined groups were taken during sunset.

The images (and the memories) are sure to be treasured for many years to come.

"I just felt so blessed to be included in something like this because I really didn't think this was going to happen."

"It was a very full day," Christine Gilbert said. "We just filled it with laughter, and I think that was how we were able to get through the day without getting too emotional. There were emotional moments, but luckily not too much wailing and lamentation."

She also noted that her family has leaned on their faith and their church network to get through this challenging time, and in a way, she thinks a higher power could be looking after them.

Before her mother received her formal diagnosis of cancer in May 2020, Christine Gilbert had an "unusual" nightmare that her mother had a brain tumor. 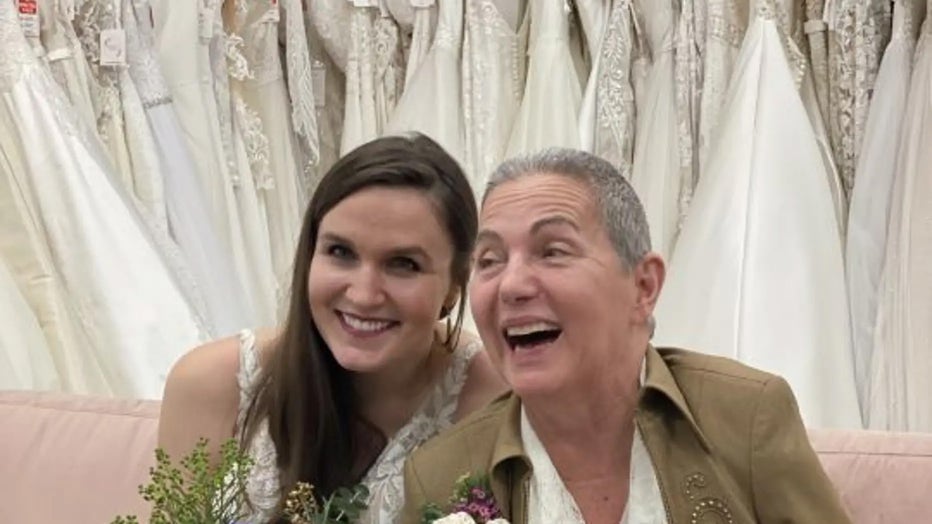 Christine Gilbert (left) and her mom, Colleen Gilbert, have been living together for two years. (Jolanta Marchewka)

The dream reportedly prompted the younger woman to push her mom to visit a doctor — and from that visit, Colleen Gilbert learned she had glioblastoma, an aggressive type of brain cancer.

"Nobody wants to be told that, and it seemed completely crazy, but it ended up being an incredible miracle that we went and got it checked out. So, I'm incredibly grateful," Christine Gilbert said.

"I think we hit it out of the park — and I think it was all we hoped it could be."

"I don't know what in the world it was that made me have that dream, or if that was just Jesus drop-kicking me into action somehow. The whole [way] we discovered this was very odd."

She added that she's grateful that her "mom has been such a fighter" despite her terminal diagnosis and has lasted longer than the timeframe doctors originally thought she was supposed to. 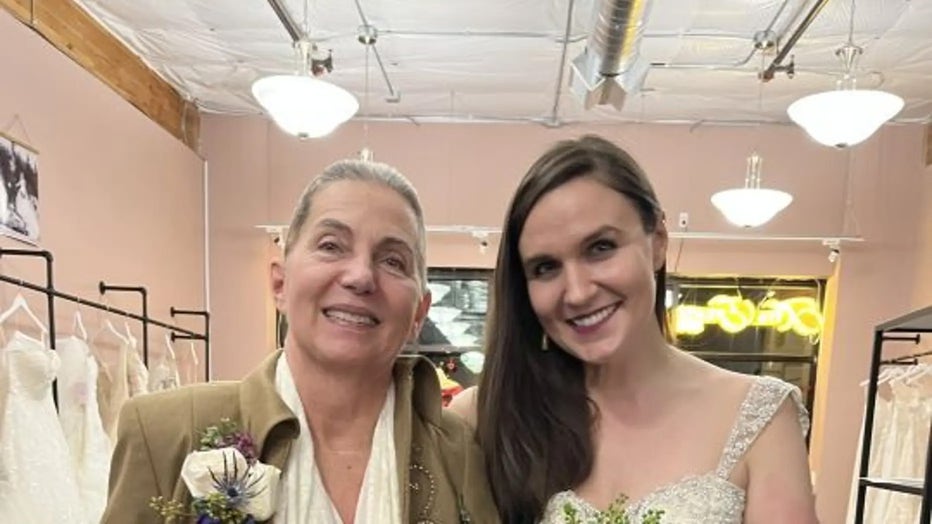 Christine Gilbert is certain that the surprise meant the world to her mother, who worked as an ophthalmologist at their family practice before her diagnosis.

"Days after the party, when I'd be tucking a blanket in and around her, my mom said, ‘Oh, Christine, look, it's spooling around me like those dresses of yours.’"

Christine Gilbert also told Fox News Digital, "I know she was just truly telling every single person she could about it, which was very sweet. So, I think we hit it out of the park — and I think it was all we had hoped it could be."

LINK: Get updates and more on this story at FOXnews.com