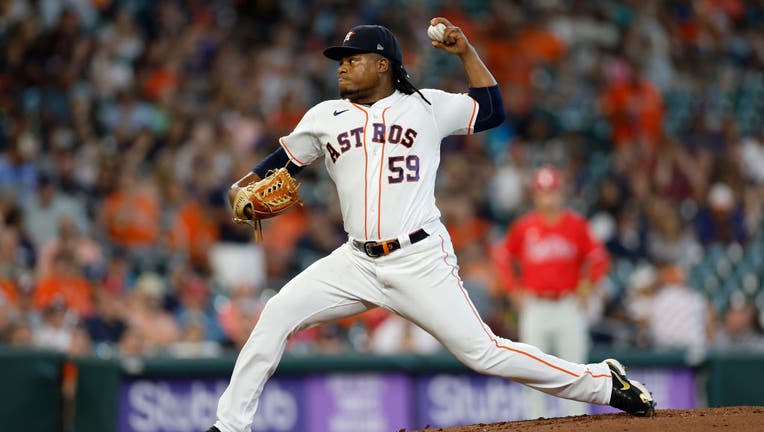 HOUSTON, TEXAS - OCTOBER 05: Framber Valdez #59 of the Houston Astros pitches in the third inning against the Philadelphia Phillies at Minute Maid Park on October 05, 2022 in Houston, Texas. (Photo by Tim Warner/Getty Images)

It will be the second start of the postseason for Castillo, who won Game 1 of Seattle’s wild-card series against Toronto. Castillo, who was acquired from the Reds just before the trade deadline, allowed six hits and struck out five in 7 1/3 shutout innings against the Blue Jays.

'WHO IS YORDADDY?' Alvarez hits 3-run HR vs Mariners in 9th, Astros jolt M's in Game 1 of ALDS

Castillo was 8-6 with a 2.99 ERA in 25 starts between the Reds and Mariners this season. He didn't face the Astros this season. His last game against Houston came in 2019 with the Reds, when he allowed two hits and two runs while walking six in six innings.

Valdez won a career-high 17 games this season to rank second in the AL behind teammate Justin Verlander.

He had 25 straight quality starts from April 25 to Sept. 18 to set the MLB record for most consecutive in a single season. His 31 starts were a career-high and his 2.82 ERA ranks second-lowest of his career and sixth in the AL.

It will be the ninth career postseason start for Valdez and his 10th appearance in the playoffs.

Mariners manager Scott Servais said the team would decide on its Game 3 starter after seeing how the first two go.