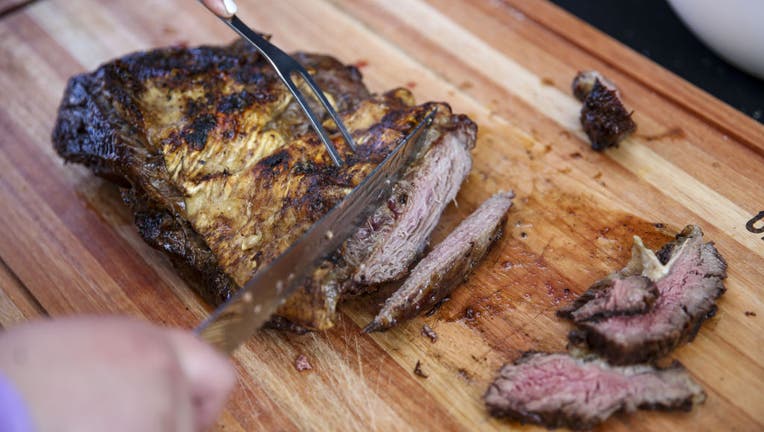 BUENOS AIRES, ARGENTINA - AUGUST 14: A meat cooked on a barbecue is seen during the 4th Federal Barbecue Competition in Buenos Aires, Argentina on August 14, 2022. Some streets were closed for the competition, which was held with the participation of

RALEIGH, N.C. - A North Carolina restaurant said a customer called 911 after her barbecue was pink, not understanding how the cooking process works.

Clyde Cooper’s BBQ in downtown Raleigh said the story may sound like a hoax, but in fact, it was real.

The restaurant detailed the story on Facebook saying that a woman ordered a barbecue plate with sides. She paid for the food and then left.

"Lady comes back and says her bbq isn't done, that it's pink," the restaurant posted in a message.

RELATED: 8-year-old boy applies for restaurant job to buy Xbox: ‘This will be my first job ever!’

As the story goes, restaurant employees explained to the woman that when meat is smoked, it turns pink. They even Googled the fact but the woman was not satisfied.

"Lady continues to say ‘It's not done' and 'well you can cook it some more,'" the Facebook post continued.

Eliot Middleton wants to make sure his community doesn't go without transportation.

The restaurant said employees then offered the women chicken in addition to her original order.

Officers then showed up at the restaurant.

"Ten minutes after her receiving her chicken, the cops show up," the restaurant said. "We had no idea she called the cops because, again, there was no real issue, everything seemed fine, and we all had a good laugh about someone not being willing to listen to reason and teaching about the smoke process."

The restaurant also joked about how they are trying to avoid "cancel culture" over the incident. Its Facebook post received thousands of likes and hundreds of shares.

"Have a great day y'all, and I'll see you soon for some pink bbq love!" the restaurant said.

The Raleigh Police Department confirmed to FOX Television Stations that an officer responded to a call at Clyde Cooper's BBQ, as described.

"As no crime was committed, a police report was not filed and there are no further updates," a department spokesperson said.