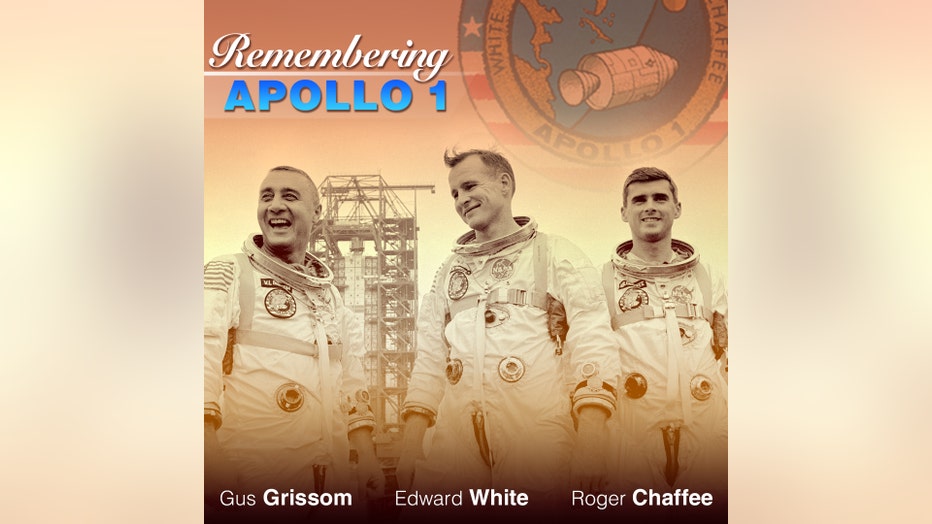 One of the worst tragedies in the history of spaceflight occurred on January 27, 1967, when the crew of Gus Grissom, Ed White, and Roger Chaffee were killed in a fire in the Apollo Command Module during a preflight test at Cape Canaveral. They were training for the first crewed Apollo flight, an Earth-orbiting mission scheduled to be launched on 21 February. They were taking part in a "plugs-out" test, in which the Command Module was mounted on the Saturn 1B on the launch pad just as it would be for the actual launch, but the Saturn 1B was not fueled. The plan was to go through an entire countdown sequence.

If we die, we want people to accept it. We're in a risky business, and we hope that if anything happens to us it will not delay the program. The conquest of space is worth the risk of life

At 1 p.m. on Friday, 27 January 1967 the astronauts entered the capsule on Pad 34 to begin the test. A number of minor problems cropped up which delayed the test considerably and finally, a failure in communications forced a hold in the count at 5:40 p.m. At 6:30 p.m., Grissom said, "How are we going to get to the Moon if we can't talk between three buildings?". At 6:31 p.m. a surge was recorded in the AC bus 2 voltage readings, possibly indicating a short-circuit. The cockpit recording is difficult to interpret in places but a few seconds later one of the astronauts (probably Chaffee) is heard to say what sounds like "Flames!". Two seconds after that White was heard to say, "We've got a fire in the cockpit." The fire spread throughout the cabin in a matter of seconds. Chaffee said, "We have a bad fire!", followed by shouting. The last crew communication ended 17 seconds after the first indication of the start of the fire, followed by loss of all telemetry. The Apollo hatch could only open inward and was held closed by a number of latches that had to be operated by ratchets. It was also held closed by the interior pressure, which was higher than outside atmospheric pressure and required venting of the command module before the hatch could be opened. It took at least 90 seconds to get the hatch open under ideal conditions. Because the cabin had been filled with a pure oxygen atmosphere at normal pressure for the test and there had been many hours for the oxygen to permeate all the material in the cabin, the fire spread rapidly and the astronauts had no chance to get the hatch open. Nearby technicians tried to get to the hatch but were repeatedly driven back by the heat and smoke. By the time they succeeded in getting the hatch open roughly 5 minutes after the fire started the astronauts had already perished, probably within the first 30 seconds, due to smoke inhalation and burns.

The Apollo program was put on hold while an exhaustive investigation was made of the accident. It was concluded that the most likely cause was a spark from a short circuit in a bundle of wires that ran to the left and just in front of Grissom's seat. The large amount of flammable material in the cabin in the oxygen environment allowed the fire to start and spread quickly. A number of changes were instigated in the program over the next year and a half, including designing a new hatch which opened outward and could be operated quickly, removing much of the flammable material and replacing it with self-extinguishing components, using a nitrogen-oxygen mixture at launch, and recording all changes and overseeing all modifications to the spacecraft design more rigorously.

The mission, originally designated Apollo 204 but commonly referred to as Apollo 1, was officially assigned the name "Apollo 1" in honor of Grissom, White, and Chaffee. The first Saturn V launch (uncrewed) in November 1967 was designated Apollo 4 (no missions were ever designated Apollo 2 or 3). The Apollo 1 Command Module capsule 012 was impounded and studied after the accident and was then locked away in a storage facility at NASA Langley Research Center. The changes made to the Apollo Command Module as a result of the tragedy resulted in a highly reliable craft which, with the exception of Apollo 13, helped make the complex and dangerous trip to the Moon almost commonplace. The eventual success of the Apollo program is a tribute to Gus Grissom, Ed White, and Roger Chaffee, three fine astronauts whose tragic loss was not in vain.