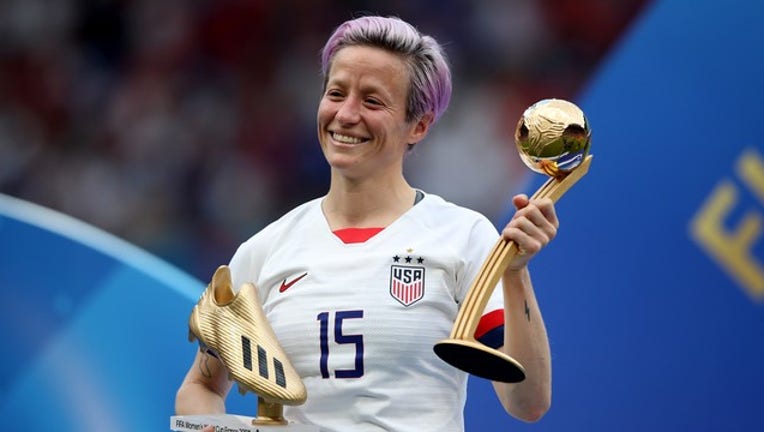 LYON, France (AP) - A Women's World Cup stirred by heated debates on politics, pay and technology saw the narratives fused in Sunday's final by the undisputed and outspoken star of the tournament: Megan Rapinoe.

By opening the scoring with a penalty awarded after a video review, Rapinoe claimed a sixth goal and - thanks to three assists and playing fewer minutes - finished as the Golden Boot winner of the most-watched FIFA women's tournament.

Winning the top player prize provided the pink-haired captain renowned for her individuality and activism with a platform for both after the Americans completed their title defense with a 2-0 victory over the Netherlands.

The forward got to collect her scoring trophy before the main prize was handed out in Lyon, and revel in the adulation.

But only after the introduction of French President Emmanuel Macron and FIFA counterpart Gianni Infantino for the on-field trophy presentation was followed by boos and chants of "equal pay" - thousands taking up Rapinoe's campaign for more equitable prize money from the World Cup organizers and compensation from the U.S. federation.

"A little public shame never hurt anyone," Rapinoe said with a winners' medal around her neck. "So I am down with it."

Not down with a visit to the White House, though, with Rapinoe's rejection of a post-tournament visit delivered publicly in a video that emerged during the World Cup.

"Megan should WIN first before she TALKS!" President Donald Trump responded in tweet that lit up the tournament. "Finish the job!"

When the job was finished Sunday, thanks to Rose Lavelle also scoring, only congratulations came from Trump - for the entire team.

"Great and exciting play," he tweeted. "America is proud of you all!"

In the hours before the Americans won a record fourth World Cup, Rapinoe found an advocate for the pursuit of greater pay equality in the French president.

This time, it is only half that.

Victory gave the Americans $4 million - double the amount earned four years ago - as part of a $30 million prize pot but lagging the $38 million earned by France for lifting the men's trophy last July in Moscow.

On the eve of the final, sitting in the same news conference position occupied by Infantino a day earlier, Rapinoe rebuked the head of soccer's governing body for disrespecting women as the prize-money gulf widens with the winners of the men's World Cups.

Rapinoe chose not to confront Infantino on the field.

"There was a wry smile, for sure," she said. "He knows. He did say we'll have a conversation or something. I said, 'I'd love to.'"

Rapinoe has something to be thankful to Infantino for: the introduction of VAR, which has had a disruptive debut in women's soccer as referees and players have adjusted to the new technology. Replays confirmed Dutch defender Stefanie van der Gragt's high challenge on striker Alex Morgan and Rapinoe took on penalty duties for her 50th international goal.

"VAR wouldn't miss the final, she had to show up somewhere," Rapinoe said. "It has gotten a lot of stick in the tournament. There's some inconsistencies but this is the first time all these referees have actually used it. So overall I think it's been pretty good."

What has been less of a success were FIFA's efforts at attracting fans to some games.

FIFA knows it has to do more to raise attendance. The sellout crowd of 58,000 on Sunday was a rarity.

In a month when FIFA challenged the world to "Dare to Shine," efforts were dimmed by marketing mishaps around ticket promotions that saw swathes of empty seats in stadiums.

The choice of venue will be scrutinized more closely with FIFA now realizing going to stronger soccer cities - rather than Montpellier and Nice - could have produced fuller stadiums.

"A lot can be done to popularize our sport a bit more, like the men's World Cup is kind of seen as a destination even for those that aren't pure football fans," said Sarai Bareman, FIFA's head of women's soccer. "We need to do a lot more to promote the game to attract that kind of fan."

While the United States, Canada and Mexico were picked last year as joint hosts of the 2026 men's World Cup, FIFA has yet to pick the destination for its next women's showpiece in four years and the decision could be delayed again.

The FIFA Council was due to make the pick in March but Infantino said Friday the bidding process might have to be re-opened after revealing plans to expand the tournament from 24 to 32 teams.

Rapinoe will be hoping players aren't still fighting over pay by then.

"Everyone's is kind of asking what's next and what we want to come of all this," she said. "It's to stop having the conversation about equal pay, are we worth it, the investment piece. ... It's time to kind of sit down with everyone and really get to work."