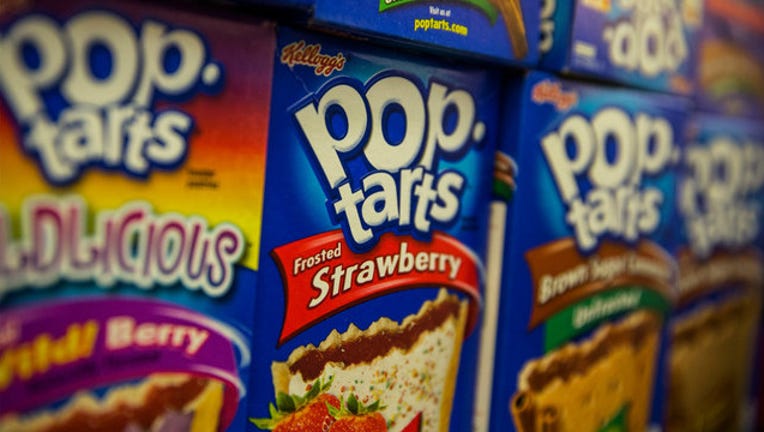 Boxes of Pop-Tarts sit for sale at the Metropolitan Citymarket on February 19, 2014 in the East Village neighborhood of New York City. (Photo by Andrew Burton/Getty Images)

(FoxNews.com) - The people behind Pop-Tarts are fed up with a Midwesterner who enjoys his breakfast pastry with mustard, so they’ve taken the only logical step they could think of: They’ve contacted the Illinois State Police.

The Pop-Tarts brand first became aware of the odd flavor combination on Tuesday, after an Illinois man proclaimed his love for spreading yellow mustard atop his Dunkin’ Donuts Vanilla Latte-flavored Pop-Tarts.

“You guys aint [sic] from Illinois if you don’t put mustard on your poptarts [sic],” wrote the man in a now-deleted Twitter post which also contained a photo of his mustard-topped pastry.

“Can you guys handle this[?]” they asked.

Though no one from the Illinois State Police responded, the police department of Dixon, Ill., came forward on Wednesday to offer its services. “Ain’t nobody puttin’ mustard on their Pop-Tarts in Illinois,” they wrote.

Pop-Tarts later retweeted the Dixon PD’s message, thanking them for their support. “Due to the severity of the crime, we need all the help we can get,” the company added.

As of Thursday morning, Pop-Tarts says it considers the battle to be “won,” as the Illinois offender deleted his original Twitter post.

Judging by their Twitter activity, the people at Pop-Tarts have been critical of strange Pop-Tart flavor mash-ups over for a few weeks now, beginning with the Iowa student who shared his idea for a Pop-Tarts-and-cheese sandwich.

They’ve also tolerated a New Yorker who dipped his Pop-Tarts in hot sauce and an Oklahoman who dipped hers in ranch dressing, though they said they found the latter combination to be especially “disrespectful.”

Mustard, however, seemed to be the condiment that broke the camel’s back, at least as far as Pop-Tarts — a company that has, at one time or another, offered "Root Beer," "Maple Bacon" and "Orange Crush" varieties — was concerned.

That said, this probably won’t be the last time Pop-Tarts resorts to calling the authorities. As of Thursday morning, they had already tried contacting Alaska’s state police about an altogether new abomination: