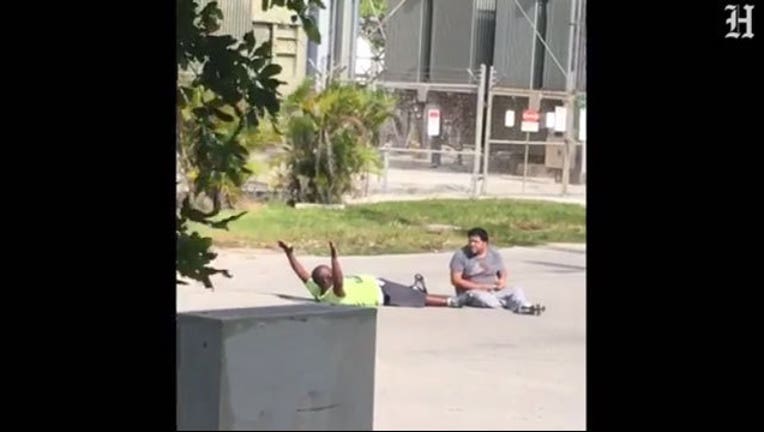 Screenshot via the Miami Herald

North Miami Assistant Police Chief Neal Cuevas told The Miami Herald that officers responded to the scene Monday to find 47-year-old Charles Kinsey, a therapist who works with people with disabilities, according to WSVN-TV, trying to get his 27-year-old patient back to a facility from where he wandered.

Cuevas says police ordered Kinsey and the patient, who was sitting in the street playing with a toy truck, to lie on the ground. Kinsey lies down and puts his hands up while trying to get his patient to comply. An officer then fired three times, striking Kinsey in the leg, Cuevas said. No weapon was found.

Kinsey's attorney, Hilton Napoleon, provided a cellphone video to the Herald on Wednesday taken moments before the shooting. It shows Kinsey lying in the middle of the street with his hands up, asking the officers not to shoot him, while the autistic man sits next to him, yelling at him to "shut up."

"Sir, there's no need for firearms," Kinsey said he told police before he was shot, according to the station. "It was so surprising. It was like a mosquito bite."

Kinsey is black. Police haven't released the name or race of the officer who shot him.