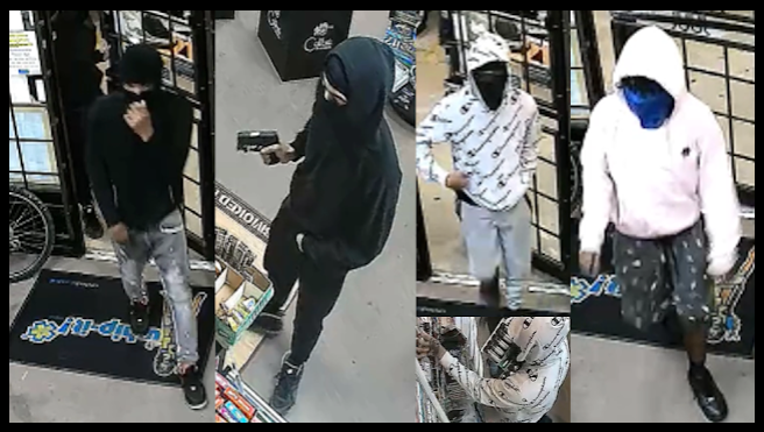 Police said the robberies took place from January 13 to February 18.

The most recent robbery occurred on February 21, when four unknown males walked into a smoke shop on the 6400 block of Richmond around 8:45 p.m.

Police said the suspects first acted like customers and walked around the store for a few minutes.

At some point, police said one of the males pulled out a handgun, pointed it at the employee behind the counter and demanded money from the cash registers.

That's when police said the suspects began to help themselves to merchandise throughout the store.

Police stated when the suspects had the money and merchandise, the suspects fled the location in a Kia four-door sedan.

The first suspect is described as a Black male, 21 to 23 years old, 5'10" tall, wearing a black hoodie and black pants.

The second suspect is described as a Black male, 24 to 25 years old, 5'8" tall, wearing a black hoodie, black pants, and armed with a handgun.

The third suspect is described as a Black male, 19 to 23 years old, wearing a white hoodie, gray pants, with a distinct tattoo on the top of his left hand.

The final suspect is described as a Black male, 19 to 23 years old, wearing a pink hoodie and gray shorts.

Please contact Crime Stoppers of Houston directly if you have any information related to this investigation. Information leading to the charging and/or arrest of any felony suspects may result in a cash payment of up to $5,000.

Tipsters must contact Crime Stoppers directly to remain anonymous and to be considered for a cash payment by calling 713-222-TIPS, submitting an online tip by clicking here or through the Crime Stoppers mobile app.