Video captures portion of deadly pileup on Pennsylvania's I-81

Dozens of vehicles were involved in a pileup on Interstate 81 in Pottsville, Pennsylvania, on March 28, 2022, when a snow squall hit the area. Credit: Mike Moye via Storyful

POTTSVILLE, Pa. - Video captured the scene of a massive pileup on Monday along a Pennsylvania highway during a snow squall, killing at least three people and injuring more than a dozen others.

An estimated 40 to 60 vehicles, including a number of tractor-trailers, were involved in the crash around 10:30 a.m. on Interstate 81 in the northeastern part of the state, officials said.

A video filmed by Mike Moye captured the chaos and showed cars and semi-trucks crashing in white-out conditions near the Minersville exit, a town located about 100 miles northwest of Philadelphia. Moye’s video shows at least one vehicle on fire and several passengers lining the snowy road and jumping out of the way as a cascade of crashes unfolded.

"This is ridiculous," Moye can be heard saying, adding later: "I need to get the f--- off the road. This is crazy!" 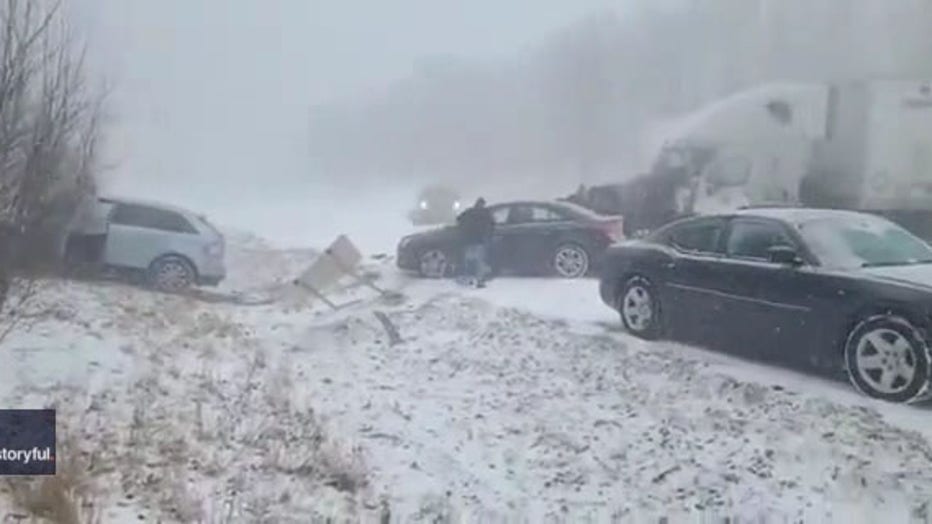 A screengrab from video shows the deadly pileup along Interstate 81 on March 28, 2022, near Minersville, Pennsylvania. (Credit: Mike Moye via Storyful)

Other videos shared on social media showed an out-of-control tractor-trailer smashed into a large dump truck turning it nearly 180 degrees, while another large truck caught fire and spewed black smoke into the air. In one video, an SUV struck a passenger car sending it spinning narrowly past a person standing on the shoulder in snow and fog.

Video mounted on the dash of a vehicle showed how quickly the road conditions changed. Stopped vehicles rose like a wall in front of the driver, and a person on the roadway stretched their arms out and jumped to escape the runaway vehicle. The impact sounded like thunder.

Blickley said emergency personnel from four different counties took about 20 patients to area hospitals for treatment. Three tractor-trailers carrying unknown cargo were on fire when emergency personnel arrived and some smaller vehicles were also on fire, he said.

Fire units on the scene included a steady stream of water tankers because the crash is "in the middle of nowhere ... there’s not a fire hydrant out here anywhere," Boehm said. 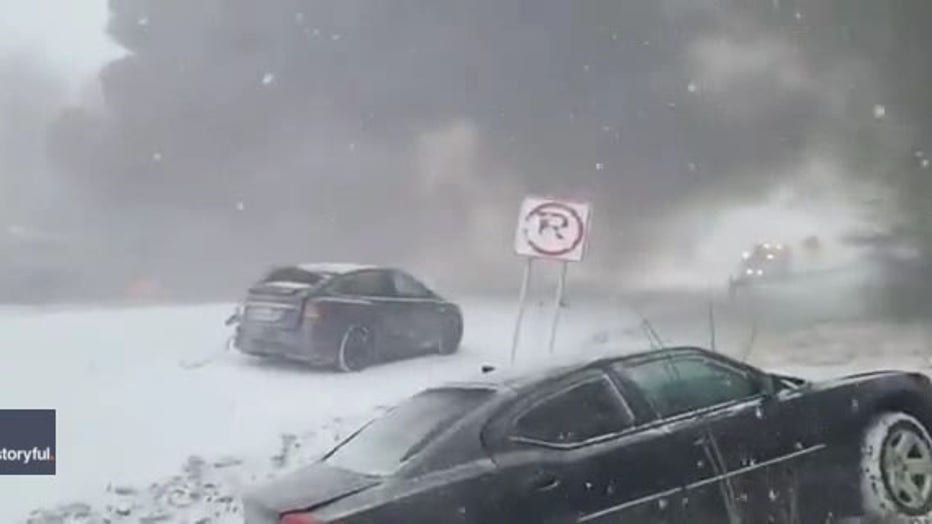 A screengrab from video shows the fiery scene of the pileup along Interstate 81 on March 28, 2022, near Minersville, Pennsylvania. (Credit: Mike Moye via Storyful)

The highway was snow-covered when the snow squall came through, he said.

"All it takes is one person to crash into something and you have to pull off the road, but when you continue to drive at highway speed, this is what happens," he said.

People whose vehicles were in the crash and the "walking wounded" were taken to the Wegman’s distribution center in an industrial park near the crash, he said. A reunification center was set up at the Goodwill Fire Company No. 1 in Minersville for people to meet friends or relatives or arrange accommodations.

Aerial video shows aftermath of deadly pileup on I-81

Aerial video recorded on March 29, 2022, shows the aftermath of a deadly pileup along Interstate 81 in Pennsylvania. Credit: FOX 29

"Think of a snow squall like a miniature blizzard with gusty winds that typically lasts less than an hour," FOX Weather says of the conditions. "Very high snowfall rates, on the order of 2 inches in 30 minutes, are not uncommon."

It adds that snow squalls can be very disorienting for drivers, as visibility can drop to "one-quarter mile or less, so you might not see another vehicle in front of you until it’s too late."

This story was reported from Cincinnati. The Associated Press and FOX29 contributed.