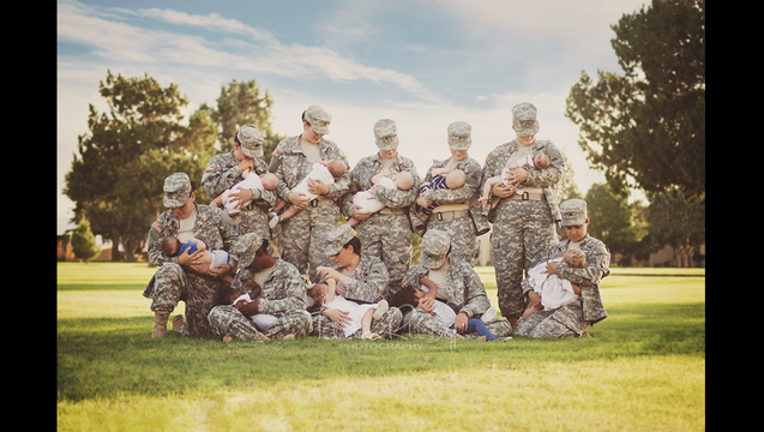 But with a closer look, you can see in this, now viral, photo they're all nursing.

Before the thousands of likes, shares, and comments on Tara Ruby's photo, Fort Bliss, the Army post in El Paso, unveiled a new nursing area for military moms.

It had everything nursing moms needed, but no decoration.

And what better way to decorate she thought than to have portraits of soldier moms in uniform breastfeeding.

With the blessing of Fort Bliss and its P3T (Pregnancy and Postpartum Physical Training) Program, Ruby's vision took off.

Ten soldiers showed up in their camo and boots with their little ones to share a tender moment with Ruby and the world.

Since Ruby posted it to her professional Facebook page she has received praise from breastfeeding advocates and military moms across the globe.

But in a recent interview, someone pointed out a comment that angered Ruby, whose clients are about 95% military members and their families.

"How are we weaker?" Ruby told us. "We're doing more than you. It takes extreme dedication to be part of the military AND take care of our babies."

In the post she writes: "I am 100% for ‪#‎normalizebreastfeeding‬. How about you?"