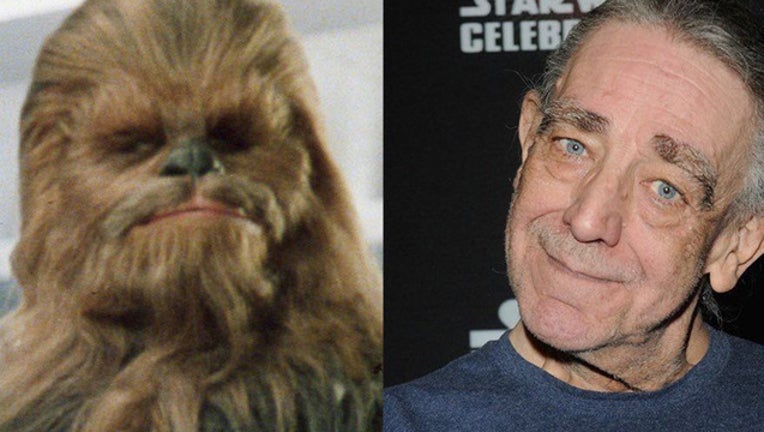 LOS ANGELES (AP) - Peter Mayhew, the towering actor who donned a huge, furry costume to give life to the rugged-and-beloved character of Chewbacca in the original "Star Wars" trilogy and two other films, has died, his family said Thursday.

Mayhew died at his home in north Texas on Tuesday, according to a family statement. He was 74. No cause was given.

As Chewbacca, known to his friends as Chewie, the 7-foot-3 Mayhew was a fierce warrior with a soft heart, loyal sidekick to Harrison Ford's Han Solo, and co-pilot of the Millennium Falcon.

Mayhew went on to appear as the Wookiee in the 2005 prequel "Revenge of the Sith" and shared the part in 2015's "The Force Awakens" with actor Joonas Suotamo, who took over the role in subsequent films.

"Peter Mayhew was a kind and gentle man, possessed of great dignity and noble character," Ford said in a statement Thursday. "These aspects of his own personality, plus his wit and grace, he brought to Chewbacca. We were partners in film and friends in life for over 30 years and I loved him... My thoughts are with his dear wife Angie and his children. Rest easy, my dear friend."

Mayhew defined the incredibly well-known Wookiee and became a world-famous actor for most of his life without speaking a word or even making a sound - Chewbacca's famous roar was the creation of sound designers.

"He put his heart and soul into the role of Chewbacca and it showed in every frame of the films," the family statement said. "But, to him, the 'Star Wars' family meant so much more to him than a role in a film."

Mark Hamill, who played Luke Skywalker alongside Mayhew, wrote on Twitter that he was "the gentlest of giants - A big man with an even bigger heart who never failed to make me smile & a loyal friend who I loved dearly. I'm grateful for the memories we shared & I'm a better man for just having known him."

Born and raised in England, Mayhew had appeared in just one film and was working as a hospital orderly in London when George Lucas, who shot the first film in England, found him and cast him in 1977's "Star Wars."

Lucas chose quickly when he saw Mayhew, who liked to say all he had to do to land the role was stand up.

"Peter was a wonderful man," Lucas said in a statement Thursday. "He was the closest any human being could be to a Wookiee: big heart, gentle nature ... and I learned to always let him win. He was a good friend and I'm saddened by his passing."

From then on, "Star Wars" would become Mayhew's life. He made constant appearances in the costume in commercials, on TV specials and at public events. The frizzy long hair he had most of his adult life made those who saw him in real life believe he was Chewbacca, along with his stature.

His height, the result of a genetic disorder known as Marfan syndrome, was the source of constant health complications late in his life. He had respiratory problems, his speech grew limited and he often had to use scooters and wheelchairs instead of walking.

His family said his fighting through that to play the role one last time in "The Force Awakens" was a triumph.

Even after he retired, Mayhew served as an adviser to his successor Suotamo, a former Finnish basketball player who told The Associated Press last year that Mayhew put him through "Wookiee boot camp" before he played the role in "Solo."

Mayhew spent much of the last decades of his life in the United States, and he became a U.S. citizen in 2005.

The 200-plus-year-old character whose suit has been compared to an ape, a bear, and Bigfoot, and wore a bandolier with ammunition for his laser rifle, was considered by many to be one of the hokier elements in the original "Star Wars," something out of a more low-budget sci-fi offering.

The films themselves seemed to acknowledge this.

"Will somebody get this big walking carpet out of my way?!" Carrie Fisher, as Princess Leia, says in the original "Star Wars." It was one of the big laugh lines of the film, as was Ford calling Chewie a "fuzzball" in "The Empire Strikes Back."

But Chewbacca would become as enduring an element of the "Star Wars" galaxy as any other character, his roar - which according to the Atlantic magazine was made up of field recordings of bears, lions, badgers and other animals - as famous as any sound in the universe.

"Chewbacca was an important part of the success of the films we made together," Ford said in his statement.

Mayhew is the third major member of the original cast to die in recent years. Fisher and R2-D2 actor Kenny Baker died in 2016.

Mayhew's family said he was active with various nonprofit groups and established the Peter Mayhew Foundation, which is devoted to alleviating disease, pain, suffering and the financial toll from traumatic events. The family asked that in lieu of flowers, friends and fans donate to the foundation.

Mayhew is survived by his wife, Angie, and three children. A private service will be held June 29, followed by a public memorial in early December at a Los Angeles "Star Wars" convention.