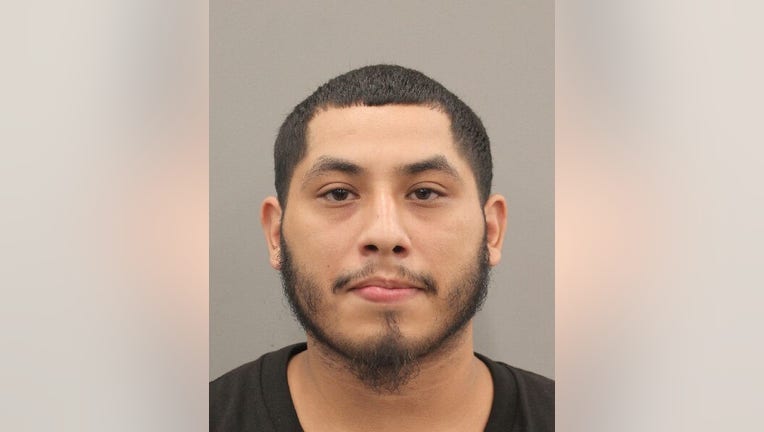 Houston police are looking for Jason Frank Vazquez, 24, in connection to the death of HPD Sgt. Sean Rios.

HOUSTON - Houston police have learned the identity of the person of interest in the death of HPD Sgt. Sean Rios.

Police are searching for Jason Frank Vazquez, so they can bring him in for questioning in connection to the deadly shooting that happened Monday, Nov. 9 in the 7900 block of the North Freeway.

HPD had released a surveillance video of Vazquez, 24, on the same day they arrested suspect Robert Soliz, who is charged with the murder of Sgt. Rios.

Houston police released a surveillance video of a man police are looking for in relation to the shooting death of Sgt. Rios.

Police say Vazquez was seen driving a black Chevrolet pickup truck and speaking with Soliz after the shooting.

According to Harris County District Attorney records, Vazquez was out on bond for two DUIs.

Below is a track record of his criminal history:

Sept. 29, 2019 --  2ND DWI Charge – At that point, the DA’s office made a motion for bond conditions (including ignition interlock and random urine samples)

He was granted a PR Bond

Houston police are asking the public to help in the search for a person of interest in the death of Sgt. Sean Rios. They released surveillance video of him.

Investigators are asking anyone who may have seen or heard anything between the 3900 and 7900 blocks of the North Freeway, north of North Interstate Highway 610 and south of Gulf Bank Road, or know the whereabouts of the person of interest, Jason Frank Vazquez, to contact the HPD Special Investigations Unit at 713-308-3600 or Crime Stoppers at 713-222-TIPS.

Sgt. Rios, who leaves behind a wife and four children, was shot and killed in north Houston last week during a "gun battle" outside a motel.