Sheriff Michael Bouchard said the suspect still had seven rounds in his gun when he was confronted and arrested by deputies.

OXFORD, Mich. (FOX 2) - As a gunman opened fire inside Oxford High School on Tuesday, confusion reigned as students, fearful for their lives, were unsure if the person knocking on the door was a gunman or actually an Oakland County Sheriff Deputy.

During an update on Wednesday, Sheriff Michael Bouchard said that there is no evidence that the suspect knocked on any doors inside the school.

A parent called into FOX 2 sharing what his son, a student who attends Oxford High School, experienced Tuesday amid a mass shooting that left three teens dead and eight other people wounded.

The parent, who said his son escaped through a window, claims that the shooter might have been knocking on classroom doors trying to get students to come out and said he was with the sheriff's office.

In the video, embedded from TikTok below, you can see confusion in the classroom as students were unsure if they were safe or not. From the other side of the door, someone yells "Sheriff's office, it's safe to come out."

One student spoke for the classroom and said they "we're not willing to take that risk right now." The voice on the other side said "come to the door and see my badge, bro."

The word ‘bro' was enough to trigger the skeptical students not to open the door but instead escape out the window.

Then the students opened a window and climbed out and ran across an outside courtyard.

On the other side of the courtyard, there was an officer inside the door and said "you're fine".

Bouchard said Wednesday that it was believed to be a plain-clothed deputy and was using the language in an attempt to calm students.

Of the victims who were wounded, one was a teacher.

Sheriff Michael Bouchard gives the latest information on the shooting at Oxford High School that killed three and wounded eight.

Savannah, a 17-year-old student, said in her classroom, she received a text from her boyfriend saying that something was wrong.

"We locked the doors, there's this closet in the classroom, so it was very safe in the classroom, in the back corner," she said, adding she heard the gunshots. "I feel like (we got out) about 30 minutes later, the police knocked on the door so we were able to get out."

Savannah said that the student and staff have had active shooter drills in the past.

"Yes it did (help), everyone was serious (and knew what to do)."

The shooting suspect, a 15-year-old sophomore, was taken into custody at about 12:56 p.m. without incident, said Oakland County Undersheriff Michael McCabe. The suspect is from Oxford Township, he said.

Oakland County Undersheriff Michael McCabe said that he was arrested within five minutes of the first 911 call - which came in at 12:51 p.m. -  by a school deputy that is assigned there, as well as one responding to the scene.

The handgun used was recovered, and the suspect did not appear to wear any body armor.

"He has already invoked his right to not speak. He wants an attorney, he is not telling us anything at this point in time," McCabe said. "We believe he acted alone and don't believe he planned this with anybody else."

When asked if the suspect gave any reason for his motivation, McCabe responded, "I'm not going to get into that."

An Oxford High School student shared video with father, who shared it with FOX 2, about the scene inside the building as a gunman opened fire, leaving three people dead.

Students hid under desks and barricaded the classroom door, the parent told FOX 2.

A student named Isabele Flores spoke to FOX 2 and said she saw one victim, a teen boy, bleeding from the face.

"All I hear is five gunshots, non-stop, and kept going."

Isabel Flores, a 15-year-old freshman at Oxford High School, could hear the gunshots and even saw one of her school mates get shot Tuesday afternoon.

Another student, named Raquelle said, "I heard one shot, not sure what it was. The second one went off and I just ran.

"It was pure chaos, no one wanted to get hit." 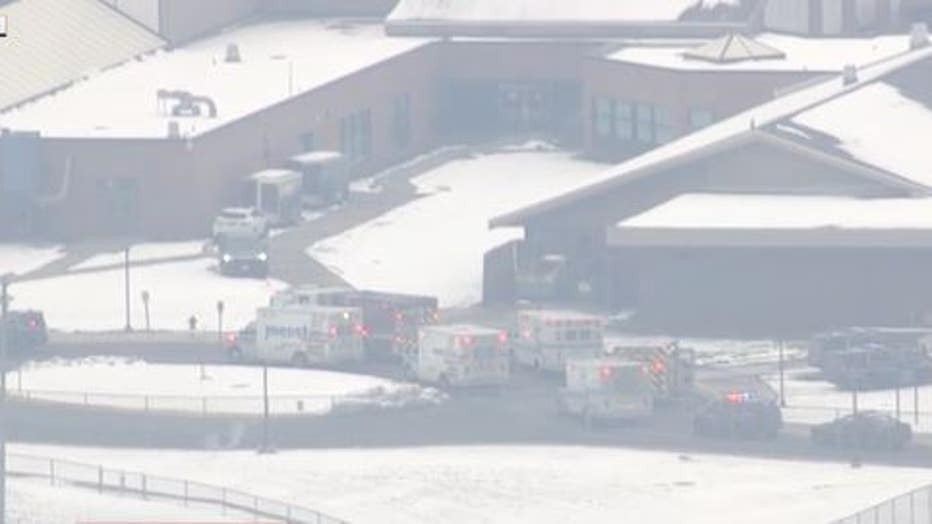 This is a developing story, please stay with FOX 2 for details as more information becomes available.