Laura, once a Category 4 hurricane, has maintained tropical storm strength as it moves further inland.

Hurricane Laura made landfall in Cameron Parish around 1 a.m. Thursday as a Category 4 hurricane with winds at 150 mph.

By noon Thursday, Laura had weakened to a tropical storm, then to a tropical depression by late Thursday evening. As of 10 p.m., maximum sustained winds are at 35 mph. Laura is located 30 miles north-northeast of Little Rock.

TRACK THE STORM & MORE ON OUR TROPICAL WEATHER PAGE

According to the National Hurricane Center, the center of Laura is forecast to move over Arkansas on Thursday night, the mid-Mississippi Valley on Friday and the mid-Atlantic states on Saturday, and over the western Atlantic on Sunday.

There are no coastal watches or warnings in effect. Tropical storm warnings remain in effect inland over portions of southern and central Arkansas.

Video from Vinton, Louisiana, shows strong winds and sheets of rain batter a vehicle as it sits motionless pulled over on a road early Thursday morning. Credit: Addison Alford via Storyful

Louisiana Governor John Bel Edwards says four people, including a 14-year-old girl and an 68-year-old man, were killed by falling trees as Laura moved through the state. None were on the coast, having happened in Vernon, Jackson and Acadia parishes.

Ahead of the storm, evacuations had been ordered along the coast.

A mandatory evacuation was ordered in Cameron Parish, where Laura came ashore. Officials said 50 to 150 people refused pleas to leave and planned to weather the storm in everything from elevated homes to recreational vehicles.

In Vermilion Parish, the sheriff’s office issued a grim warning to resident choosing to ride out Hurricane Laura, rather than evacuate.

“Please evacuate and if you choose to stay and we can’t get to you, write your name, address, social security number and next of kin and put it a ziplock bag in your pocket. Praying that it does not come to this,” a Facebook post stated.

RELATED: Louisiana sheriff to residents: ‘Write your name... and next of kin and put it in a ziploc bag in your pocket’

Video and an image from downtown Lake Charles show wild winds and severe damage to a downtown skyscraper. Flashes of blue light, likely exploding transformers, are also seen in the distance during the footage. Credit: Jeanne Adair via Storyful

Laura’s howling winds battered a tall building in Lake Charles, blowing out windows as glass and debris flew to the ground.

“There are some people still in town and people are calling ... but there ain’t no way to get to them,” Tony Guillory, president of the Calcasieu Parish Police Jury, said early Thursday morning over the phone as he hunkered down in a Lake Charles government building that was shaking from the storm.

Guillory said he hoped the stranded people could be rescued later in the day, but he feared that blocked roads, downed power lines and floodwaters could get in the way.

An apparent chemical fire broke out near Lake Charles, sending up plumes of smoke visible for miles. Edwards urged nearby residents to shelter in place and turn off air conditioners. 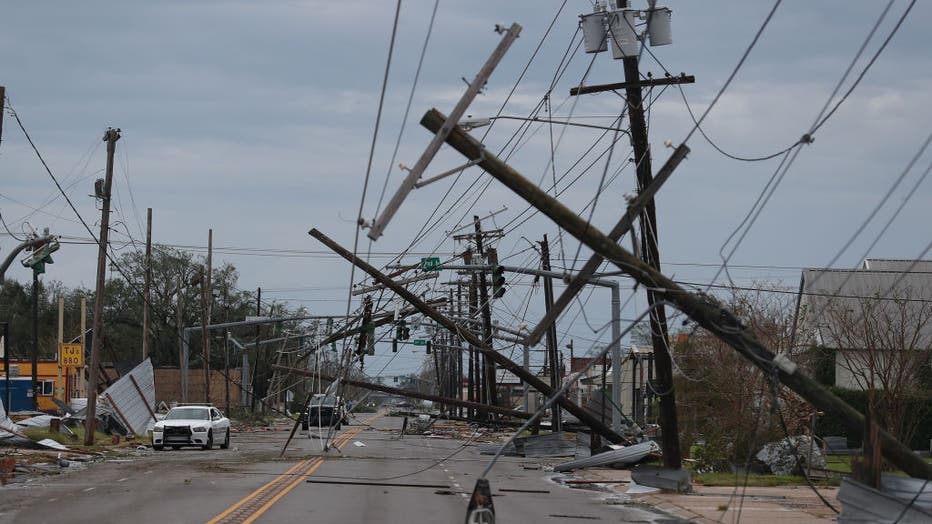 Hours after the system made landfall, initial reports offered hope that the destruction might be somewhat less than originally feared, but a full damage assessment could take days. Wind and rain blew too hard for authorities to check for survivors in some hard-hit places.

Nearly 700,000 homes and businesses are without power in both states on Thursday afternoon.

In southeast Texas, the City of Galveston, which ordered a mandatory evacuation on Tuesday, said residents could return home on Thursday. Officials said the city did not sustain wind or storm damage, and water was receding in low-lying areas that experienced street flooding.

Laura hit the U.S. after killing nearly two dozen people on the island of Hispaniola, including 20 in Haiti and three in the Dominican Republic, where it knocked out power and caused intense flooding.

Laura was the seventh named storm to strike the U.S. this year, setting a new record for U.S. landfalls by the end of August. The old record was six in 1886 and 1916, according to Colorado State University hurricane researcher Phil Klotzbach.