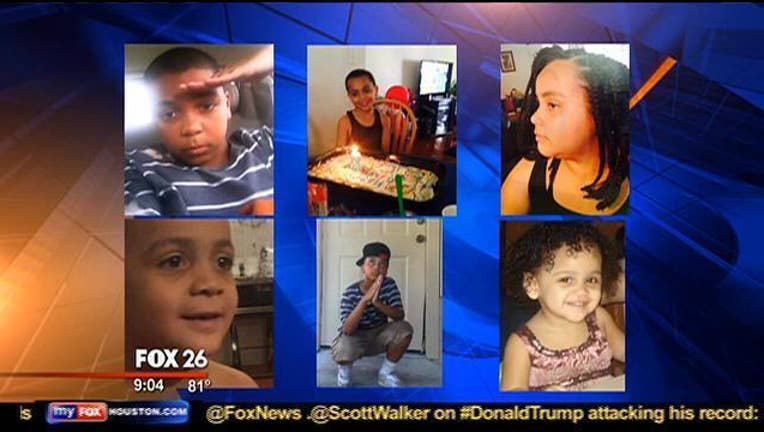 Plans for a funeral for the 8 victims of the mass shooting in Northwest Houston have been announced.  The six children, man and woman murdered will be remembered at Fallbrook Church at Noon on Monday.

On Thursday night, neighbors gathered for a vigil at the home to share their grief with one another.  Wendy Antonio, a friend and classmate of the victims said: "I remember how joyful they were and how much of a good vibe they had they were such innocent kids. It felt so good to be around them."

Neighbors are hoping to see the alleged gunman, David Conley, pay for the crimes.  Karen Riggins who attended the vigil, said she wants "Justice for the 8, I pray that justice for the 8 is done."

The home was a rental property so deputies initially had no idea who was living there,  Neither car in the driveway was David Conley's.  He allegedly parked it two blocks away, to reportedly avoid having his plates run by authorities at the scene.

A series of calls went to 9-1-1 on the day of the murders.  Here is the timeline and statement released by the Harris County Sheriff's Office:

On August, 8, 2015, Deputies were dispatched on multiple welfare checks at a residence located at 2211 Falling Oaks Road in Harris County, Texas.

Deputies would later discover the bodies of six children and two adults inside after a standoff with alleged shooter David Conley, III.

A detailed timeline of the Sheriff’s Office calls for service is outlined below.

The calls for a welfare check were triggered after 9-1-1 call takers received reports that a female on the property had sent concerning messages via Facebook and SMS Text to family members in states outside of Texas.

Repeated attempts to make contact with residents inside the Falling Oaks home went unanswered, until visibility changed allowing deputies conducting a perimeter search of the premises to observe the body of a deceased individual inside of the home.

Due to the exigent circumstances observed at 10:26 PM, deputies forced entry into the home, and were immediately met with gunfire.

The Sheriff’s High Risk Operations Unit and Hostage Negotiation Team were able to negotiate the peaceful surrender of Conley at approximated 11:58 pm.

The Harris County Sheriff’s Office has received permission to release the timeline of events occurring at 2211 Falling Oaks Road on August 8, 2015.  In order to preserve the integrity of the criminal investigation and prosecution, certain details have been omitted in accordance to the Texas Public Information Act.