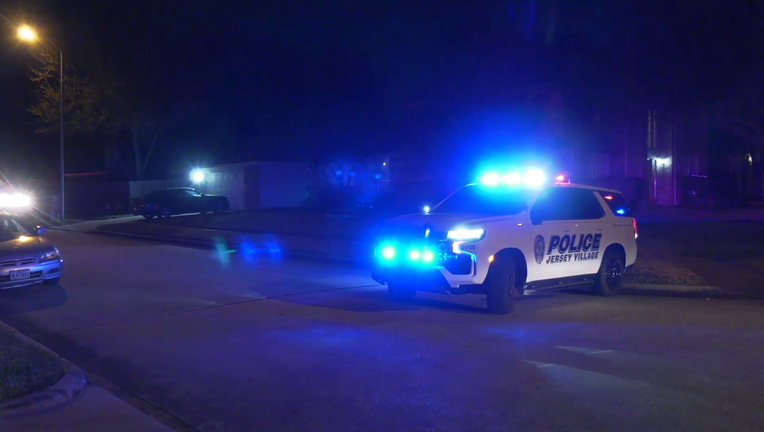 JERSEY VILLAGE, Texas - An investigation is underway by the Texas Rangers following a Jersey Village officer-involved shooting on Wednesday evening.

Authorities said the incident occurred in the 9000 block of Pheasant Trace Court just before 7:45 p.m.

According to the Jersey Village Police Department, it began around 6:21 p.m. when officers received a notification from a license plate reader camera about a reported stolen vehicle that was heading northbound on Jones Road at Highway 290.

The police department says officers were unable to locate the vehicle at that time, but around 7:34 p.m., they found the vehicle near Jones Road and Steep Park.

According to Jersey Village PD, the officers — a two-man unit — followed the vehicle into a subdivision, waiting for a backup unit when the vehicle stopped. Officials say the officers activated their emergency equipment and conducted a felony traffic stop.

"The vehicle stopped. And when the officers got out to conduct a felony traffic stop, the driver accelerated, striking the right quarter of the police vehicle," Jersey Village Police Chief Kirk Riggs said during a news briefing on Wednesday night.

That’s when, authorities say, the officer, who was a passenger in the police vehicle, fired his weapon.

The suspect was shot in the left shoulder and was taken to the hospital in stable condition.

The officer was also transported to the hospital with cuts to his hands and an injured leg.

The officer involved in the shooting has been placed on administrative leave, per departmental policy.

The incident remains under investigation by the Texas Rangers, Jersey Village Police Department Internal Affairs and the District Attorney’s Office.