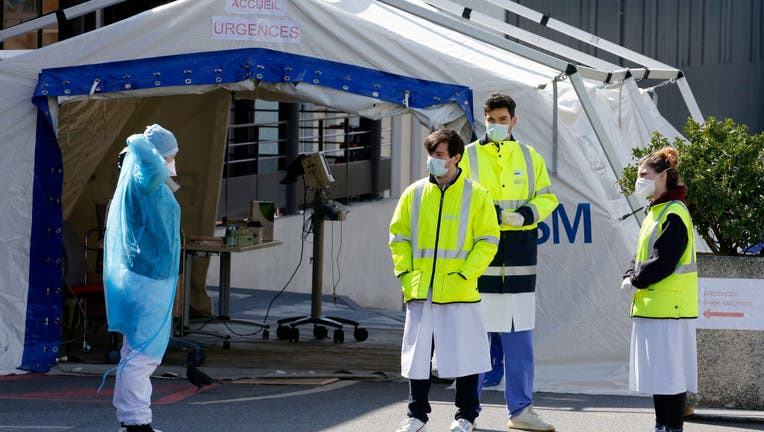 CRETEIL, FRANCE - MARCH 31: Health workers wearing protective masks wait for patients at the Henri Mondor hospital during the Coronavirus epidemic (CODIV 19) on March 31, 2020 in Creteil, near Paris, France. The country is issuing fines for people ca

PARIS - One by one, elderly residents of French nursing homes are going into forced isolation into their rooms. Their caregivers are walling themselves in as well. They are running out of body bags.

But no one knows for sure how many people have become sick. Governments in Europe’s hardest-hit countries — Italy, Spain and France — are not routinely testing for coronavirus among elderly residents who fall ill in nursing homes or even those who eventually die there, including those who suffered from symptoms of the disease.

The three countries together make up around a third of the global pandemic’s confirmed cases, and the lack of testing leaves hundreds, potentially thousands, of victims of the disease uncounted as health authorities try to trace its path.

The heavy dependency upon hospitals to count coronavirus fatalities poses particular problems for evaluating the spread of COVID-19 among the oldest citizens. Hospitals are increasingly reluctant to admit elderly coronavirus patients judged to have little chance of successful treatment.

Indications are they have paid a steep toll in anonymity. In France, the two regions hit earliest by the pandemic reported an over 30% increase in the number of deaths from March 1-16 compared to the previous year, according to the national statistics agency, which released the figures for the Haut-Rhin and southern Corsica regions late last week. Spain and Italy have not yet released initial death statistics for the month.

In Madrid, one of the most affected cities in Europe, a leading regional official acknowledged that the coronavirus infection of one elderly woman was confirmed after her death only because the nursing home’s physician “insisted.” Around the Italian city of Bergamo, the epicenter of the country’s outbreak, 400 people died in a single week in early March — four times the number who died the same week the previous year, according to the Bergamo mayor’s office. Only 91 of those had tested positive for the virus.

In France, once two residents of the same nursing home test positive, any other residents who fall sick and ultimately succumb to the disease are “assumed” to have the illness, but they are not actually tested or counted among the national toll, which so far only includes those who have sought care in a hospital. The government has promised to include nursing home residents early this week but has yet to implement widespread testing of residents. The supply of body bags is dwindling, according to Marc Bourquin of the French hospital federation, an umbrella organization for half of the country’s 7,000 nursing homes.

The challenge of tracking deaths is not unique to COVID-19. Many of the world’s fatal illnesses are not counted individually. For example, U.S. influenza death tallies are drawn from mathematical models that rely on data taken at a network of hospitals. In the developing world, such estimates can be even cruder. About half of the 60 million people who die in the world each year have no death certificates or other records describing what killed them.

A study by Italy’s national health institute used sampling to approach the question of how many elderly in nursing homes died with the coronavirus. In the hardest-hit region of Lombardy, half of all residents of nursing homes who died since Feb. 1 either had the virus or its flu-like symptoms, but most of the deaths only cited flu because tests were carried out irregularly. About 1 in 10 Italian nursing homes said they struggled to get residents into hospitals, and 1 in 4 had problems properly isolating those who tested positive for the virus.

Britain, too, is trying to trace the disease among those who never make it to the hospital. The Office for National Statistics added 40 deaths Tuesday for a toll of 210 in England and Wales, to include people who died in nursing homes and other settings.

In Germany, where deaths so far have been much lower than elsewhere in Europe and the United States, testing is routine for anyone with flu-like symptoms who visited a high-risk area or had contact with someone confirmed to have the virus. So if a case appears in a nursing home and patients or staff fall ill, testing is available to everyone.

France, where the government is bracing for a wave of sickness in the next 14 days, went from forbidding visitors to nursing homes on March 11 to asking the facilities to take even sharper measures last weekend.

“I’m asking the establishments to isolate residents in their rooms,” Olivier Véran, France’s health minister, said Saturday. “We have to give priority to testing personnel.”

At many nursing homes, staff members are also volunteering to confine themselves with their charges.

“This is not something we do lightly. It’s just that we have no choice,” Eric-Angelo Bellini, director of a nursing home in the central Vienne region, told Europe 1 radio. “Test us! Test all the staff, the residents!”

It is an especially sensitive subject in France, where every worker is required by law to dedicate a day of “solidarity” pay annually to the elderly and disabled after a heat wave in 2003 left 15,000 vulnerable people dead across the country.

While most people suffer only mild or moderate symptoms from COVID-19, the elderly are vulnerable to more severe illnesses, including pneumonia, which can be fatal.

In Spain, soldiers disinfecting nursing homes last week discovered that residents at several facilities were living among the bodies of people suspected of dying from the virus.

In the United States, several facilities have seen unusually high death tolls. Federal officials found that staff at multiple long-term care facilities contributed to the spread of COVID-19 among the elderly in the Seattle area.

In multiple nursing homes in France, including one for Holocaust survivors in Paris, the number of dead reaches into the double-digits, with far more believed infected. The fear is that their deaths will go unremarked.

“For the nursing homes, there will always be uncertainty,” Bouquin said. “The procedure is a doctor has to indicate the cause of death. And for that, there has to be tests.”