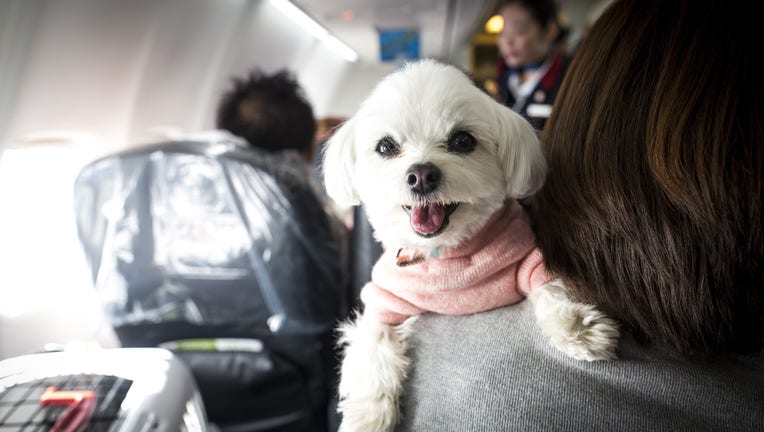 CHIBA, JAPAN - JANUARY 27 : A dog is seen on the shoulder of its owner in a plane in Chiba, Japan on January 27, 2017. Japan Airlines "wan wan jet tour" allows owners and their dogs to travel together on a charter flight for a special three-day domes

The days of passengers bringing rabbits, turtles, and birds on planes as emotional-support animals could be ending.

The U.S. Department of Transportation on Wednesday proposed that only specially trained dogs qualify as service animals, which must be allowed in the cabin at no charge. Airlines could let passengers bring other animals on board, but hefty fees would apply.

Airlines say the number of support animals has been growing dramatically in recent years, and they have lobbied to tighten the rules. They also imposed their own restrictions in response to passengers who show up at the airport with pigs, pheasants, turkeys, snakes, and other unusual pets.

“This is a wonderful step in the right direction for people like myself who are dependent on and reliant on legitimate service animals that perform a task to mitigate our disability,” said Albert Rizzi, founder of My Blind Spot, which advocates for accessibility for people of different ability levels.

The U.S. airline industry trade group praised the tighter rules. Industry officials believe that hundreds of thousands of passengers scam the system each year by claiming they need their pet for emotional support. Those people avoid airline pet fees, which are generally more than $100 each way.

“Airlines want all passengers and crew to have a safe and comfortable flying experience, and we are confident the proposed rule will go a long way in ensuring a safer and healthier experience for everyone,” said Nicholas Calio, president of Airlines for America.

Flight attendants had pushed to rein in support animals, too, and were pleased with Wednesday’s proposed changes.

MORE: Get updates on the latest travel news

“The days of Noah’s Ark in the air are hopefully coming to an end,” said Sara Nelson, president of the Association of Flight Attendants. The union chief said untrained pets had hurt some of her members.

Veterans groups have sided with the airlines, arguing that a boom in untrained dogs and other animals threatens their ability to fly with properly trained service dogs. Last year, more than 80 veterans and disability groups endorsed banning untrained emotional-support animals in airline cabins.

“It’s just interesting how people want to have the benefits of having a disability without actually losing the use of their limbs or senses just so they can take their pet with them,” Rizzi said.

Department officials said in a briefing with reporters that they are proposing the changes to ensure safety on flights. They also said some passengers have abused the current rules.

The public will have 60 days to comment on the proposed changes, and they could take effect any time after that.

Currently, passengers have been allowed to bring many other animals if they have a medical professional’s note saying they need the animal for emotional support.

The proposal would prohibit airlines from banning particular types of dog breeds — Delta Air Lines bans pit bulls, for example – but airline employees could refuse to board any animal that they consider a threat to other people.

The president of the Humane Society of the United States said airlines had “maligned” pit bulls by banning them. Kitty Block said the Transportation Department’s rule against breed-specific prohibitions “sends a clear message to airlines that their discriminatory practices are not only unsound, but against the law.”

The new rules would also bar the current practice by many airlines of requiring animal owners to fill out paperwork 48 hours in advance. A department official said that practice can harm disabled people by preventing them from bringing their service dog on last-minute trips. But airlines could still require forms attesting to an animal’s good behavior and health, which could present challenges if the form has to be completed by a specific institution, Rizzi said.

The proposal also says people with service animals must check in earlier than the general public, and would end the rarely seen use of miniature horses as service animals, although a Transportation Department official indicated the agency is open to reconsidering that provision.

Airlines could require that service animals be on a leash or harness and fit in its handler’s foot space. They could limit passengers to two service animals each, although it is unclear how often that happens under the current rules.