Cracking down on crime in Sunnyside

FOX 26 Reporter Damali Keith explains what one pastor is doing to help fight crime in one area of Houston.

HOUSTON - You may have noticed the billboards around town declaring "Crime Can’t Hide in Sunnyside." It’s part of a new campaign cracking down on crime. Residents say they are excited to see steps are being taken to protect the people who are fed up with crime.

"I’ve seen Sunnyside go from being able to leave your front door open, door unlocked, windows up at nighttime to trying to get home before dark, because you’re afraid in your own community," says Curtis Dockery, who’s been a Sunnyside resident for 70 years.

When you look up in the sky now off the 610 Loop, you won’t see a superhero, but rather a sizable sign set up to help fight crime in Sunnyside. Put up by what some say is a super man who was raised here and has been head pastor of a Sunnyside church for decades. 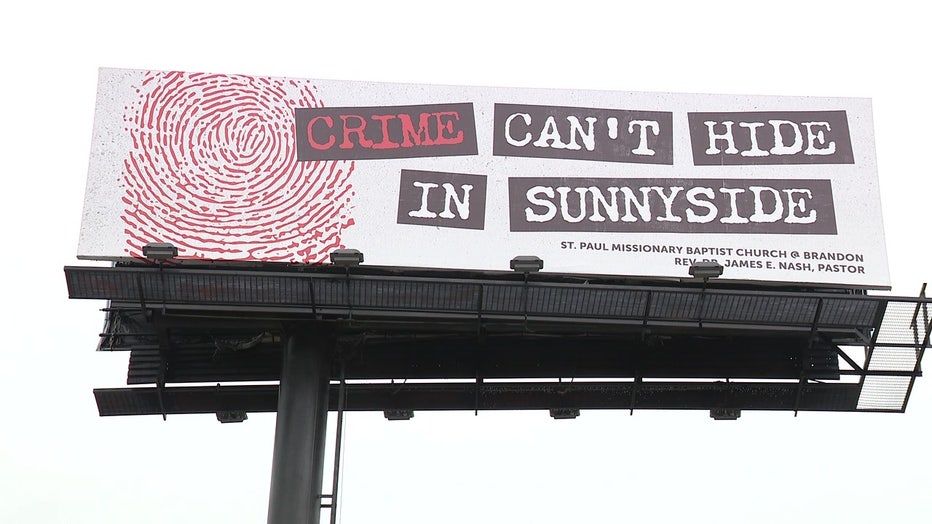 "Father, we’re about working together. We pray now that all will be well with all of us and our communities will be safe. Too many of our babies are being buried. Too many sisters are being killed. It’s unnecessary..." the pastor prayed while holding hands with several others at the base one of the billboards.

"To me, it’s gotten worse. There was a time we didn’t have all this. Now when you get inside, you better quickly lock your door," says Stella Nash, who’s a longtime Sunnyside Resident.

"I haven’t been a crime victim, but I know victims. People’s homes have been broken into, people have been assaulted," Dockery adds.

There will be a total of 12 signs erected, and they are much more than one massive message.

"Crime cannot abide in Sunnyside," one person after another announced as they stood before the microphone.

It’s a movement, of sorts, with city leaders and residents coming together to push crime and criminals out.

"Stop this and turn your lives around, so that you can become a part of the thread of society," says Houston City Councilwoman Dr. Carolyn Evans-Shabazz.

"This is very necessary because crime is so prevalent in Sunnyside now," Dockery says.

"We’re concerned about Sunnyside right now. Recent statistics said there’s a one in 11 chance of being a victim of a crime in this area," says Houston City Councilman Michael Kubosh.

"We’ve had a tough couple of years, not just of course in Sunnyside, but citywide and across the nation as far as crime is concerned. We have strategies in place. We’re proactively dealing with some of our problem areas," adds Houston Police Department Commander Mike Collins, who says HPD is putting more patrol cars in Sunnyside and doing more undercover work here.

Another big part of the campaign is encouraging residents to report criminal activity.

Nash also wants to drive home the point that Sunnyside isn’t necessarily more dangerous than other areas of town, but he’s taking action because that's where he lives.