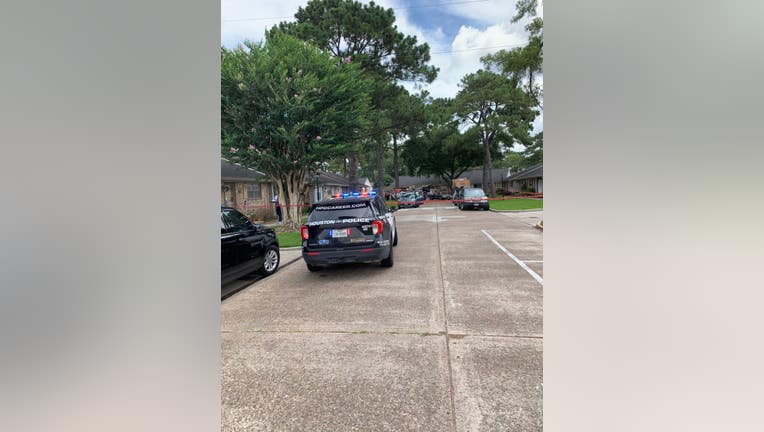 Houston police on the scene of a shooting on Tri Oaks Lane. (Photo: Houston Police Department)

HOUSTON - Houston police say charges have been filed against a suspect who was arrested in connection to the deadly shooting of two women and for firing shots at an officer.

Lewis Trinidad Nunez, 46, is charged with attempted capital murder of a police officer and murder. Police say the suspect was shot when an officer returned fire, and Nunez remains hospitalized.

The shooting occurred at an apartment in the 1000 block of East Tri Oaks Lane on Sunday.

Officers responded to a call about a domestic disturbance around 9:15 a.m.

As officers arrived, a woman reportedly ran to the front door of the apartment where the 911 call came from.

Police say a man opened the door and shot the woman at close range, in front of a responding officer.

The officer got out of his vehicle and ordered the suspect to drop his weapon, but the suspect fired shots at the officer, according to HPD.

Police say the officer returned fire, striking the suspect several times. The suspect reportedly then closed the door of the apartment and barricaded himself inside.

SWAT officers responded to the scene. Police say the suspect later surrendered and was taken into custody. He was taken to the hospital.

Officers who entered the apartment found a second woman dead. Police say she is the daughter of the woman who was shot in front of the officer. The mother also died from her injuries.

According to HPD, it was later determined that the suspect was the boyfriend of the woman found inside the apartment.

No officers were injured. The police department identified the officer who discharged his duty weapon as Officer H. Tran, who was sworn in as an HPD officer in June 2012 and is assigned to the Northwest Patrol Division.

As is customary in HPD officer-involved shooting incidents in the Houston city limits, this case is being investigated by the HPD Special Investigations Unit, the Internal Affairs Division and the Harris County District Attorney's Office.