The Abbott Laboratories test is used daily at the White House to test Trump and key members of his staff.

WASHINGTON (AP) - As businesses reopened Friday in more of the U.S., an overwhelming majority of states still fall short of the COVID-19 testing levels that public health experts say are necessary to safely ease lockdowns and avoid another deadly wave of outbreaks, according to an Associated Press analysis.

Rapid, widespread testing is considered essential to tracking and containing the coronavirus. But 41 of the nation's 50 states fail to test widely enough to drive their infections below a key benchmark, according to an AP analysis of metrics developed by Harvard’s Global Health Institute.

Among the states falling short are Texas and Georgia, which moved aggressively last month to reopen stores, malls, barbershops and other businesses.

As health authorities expand testing to more people, the number of positive results should shrink compared with the total number of people tested. The World Health Organization and other health researchers have said a percentage above 10% indicates inadequate testing. South Korea, a country praised for its rapid response, quickly pushed its positive cases to below 3%.

Most governors are moving ahead with unlocking their states, even in cases where they are not meeting broad guidelines recommended by the White House.

Texas Gov. Greg Abbott has set a goal of 30,000 tests per day as his state launched one of the nation’s most aggressive reopenings on May 1. He never set a firm date on when the state would hit the 30,000 mark, but for most of May, the daily testing numbers have fallen well short of that.

Local leaders say tests are still in short supply. El Paso officials have pleaded with the governor to postpone easing up any more business restrictions in light of the COVID-19 cases there surging 60% over the past two weeks.

Man records himself being tested for COVID-19

A Canadian man recorded himself undergoing a COVID-19 test.

The first stage of reopening in Maryland was scheduled to take effect Friday evening, when some retail stores will be allowed to reopen and a stay-at-home order lifted. But some of the hardest-hit parts of the state, including the suburbs of Washington, D.C., extended restrictions for residents and businesses.

Maryland averaged 4,265 tests per day this week, compared with about 4,900 the previous week. Nearly 22 percent of people tested positive in Maryland on average over the last seven days.

Maryland Gov. Larry Hogan made headlines last month when the state acquired 500,000 test kits from a South Korean company in a confidential deal, but Maryland has not had all the components needed for testing — like swabs — to meet demand. Hogan said Maryland just received swabs this week from the Federal Emergency Management Agency.

Researchers at Harvard University have calculated that the U.S. needs to test a minimum of 900,000 people per day to safely reopen the economy, based on the 10% positivity rate and several other key metrics. That goal is nearly three times the country’s current daily testing tally of about 360,000, according to figures compiled by the COVID Tracking Project website.

“The fact that testing has become the Achilles’ heel that has made it hard for us to have a great national response to this pandemic is a tragedy,” said Dr. Ashish Jha, director of Harvard’s Global Health Institute. “I’d like us to have a massive amount of ubiquitous testing so that, of all the things we need to worry about, testing isn’t one of them.” 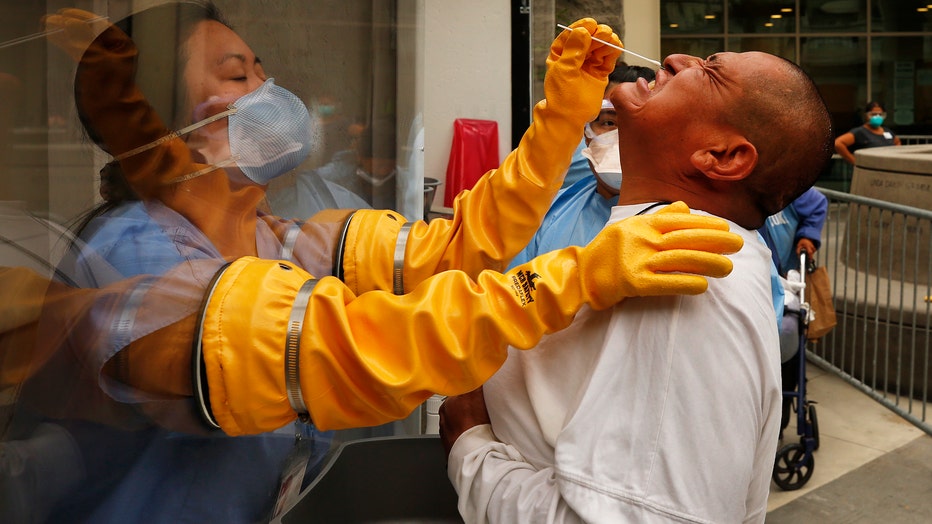 President Donald Trump insisted again this week that his administration had “met the moment” and “prevailed” on testing, even as he continued to shift responsibility for the effort to the governors. Administration officials said they will provide states with enough testing supplies to conduct about 400,000 tests per day in May and June. But that’s still less than half the total recommended by the Harvard team.

Only nine states met the daily rate recommended by Jha and his colleagues, according to the AP analysis. Most of those states are large and rural, such as Montana, Alaska, North Dakota and Wyoming. Meanwhile, states with some of the biggest testing shortfalls, including New York and New Jersey, have signaled they will keep stay-at-home orders in place or only partially ease restrictions.

“I really do feel there are dangers here opening up without enough tests, but I don’t feel it’s a uniform danger everywhere in the country,” Jha said.

In New York, Gov. Andrew Cuomo will allow many smaller cities and rural regions of upstate New York to gradually reopen first, industry by industry, in areas that have been spared the brunt of the coronavirus outbreak. The first wave of businesses includes retail — though only for curbside or in-store pickup — along with construction and manufacturing. Cuomo also announced that beaches would be allowed to open in time for the Memorial Day weekend.

New Jersey Gov. Phil Murphy will let individual shore towns decide when it comes to reopening beaches. His long-awaited guidance Thursday directed them to set occupancy limits, require 6 feet (2 meters) of space between beachgoers, except family members or couples, and prohibit groups of 10 or more from congregating on the beach. Beaches also reopened this week in Los Angeles County, with masks required.

North Carolina is among the states that have made major progress on testing, reporting on Friday an all-time high of more than 12,000 additional tests completed compared with the previous day. But the state’s seven-day rolling average of just over 6,000 tests is still well below the 11,000 daily tests recommended by Harvard’s team. The testing increases over the past few weeks contributed in part to Gov. Roy Cooper and state leaders feeling comfortable with easing his stay-at-home order May 8.

RELATED: NIH seeking innovators 'from the basement to the boardroom' to help create rapid test for COVID-19

In the West, Grand Canyon National Park reopened Friday to allow visitors in for day trips but not overnight. By 7:30 a.m., more than two dozen people were enjoying viewpoints along the South Rim.

Signs went up reminding tourists to keep their distance from one another and stay in groups of less than 10. Park employees also were giving friendly reminders.

“It’s mostly self-awareness, but we are still encouraging the same guidelines" as the Centers for Disease Control and Prevention, Grand Canyon spokeswoman Lily Daniels said.

Volume of testing isn’t the only concern. The Food and Drug Administration said late Thursday that it was investigating preliminary data that suggested a rapid COVID-19 test used daily to test Trump and key members of his staff can miss infections. Trump expressed confidence in the test from Abbott Laboratories.

Worldwide, there have been more than 4.4 million coronavirus infections reported and 300,000 deaths, while nearly 1.6 million people have recovered, according to a tally by Johns Hopkins University.