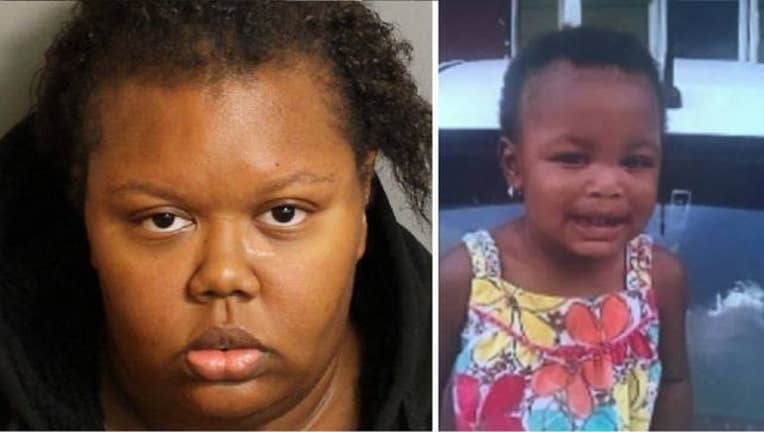 BIRMINGHAM, Ala. (AP) — A woman charged in the death of her infant daughter — who authorities say was killed by an 8-year-old boy — disputes allegations that she left the children home alone, her attorney said Wednesday.

Police say Katerra Marsha Lewis, 26, and a friend left the 8-year-old boy to watch over five younger children while the women went to a nightclub. The boy beat Kelci Lewis to death last month when she wouldn't stop crying and placed her back in her crib as if she were asleep, police said.

The boy was charged with murder in juvenile court and placed into the custody of child welfare workers, Birmingham Police spokesman Sean Edwards said. The infant's mother faces a manslaughter charge.

Legal experts say the case will be challenging on several fronts because of the boy's age.

University of Alabama associate law professor Jenny Carroll said in many jurisdictions, children under the age of 10 or 12 are presumed not to have the capacity to form criminal intent and have difficulty understanding court proceedings.

"We recognize that children don't have the same thought processes and don't have fully developed decision-making processes at that age," said Carroll, who has represented juvenile offenders.

Yet children as young as the Birmingham boy have been convicted in killings.

In 2009, an Arizona boy pleaded guilty to negligent homicide in the fatal shootings of his father and a man who rented a room in the family's home. He was 8 at the time of the shootings. The boy was sentenced to indefinite treatment at a residential facility and probation until he's 18.

Alabama is one of about three dozen states that have no minimum age for children to be prosecuted in juvenile court, according to Marsha Levick, executive director of the Philadelphia-based Juvenile Law Center. She was only aware of a handful of cases involving children younger than 12 who were charged with murder.

Levick said the case would be best handled by the child welfare system, not the juvenile justice system, because the boy would be more likely to get the necessary psychological and educational help.

"The juvenile justice system has almost nothing to offer him," she said.

Bryan Stevenson of the Montgomery-based group Equal Justice Initiative questioned the way the boy has been characterized. Police have called the assault "vicious."

"What I'm really concerned about is assigning to this boy all of these evil, and vicious and adult-like characteristics when we're talking about an 8-year-old child," Stevenson said. "This is about neglect, abuse. It's about the way we fail to help our children in the most vulnerable situations. It's not about an 8-year old murderer."

The infant's mother is charged with reckless manslaughter on accusations that she caused Kelci's death Oct. 11 by leaving her in the care of another child that she knew was violent or under conditions where the girl wouldn't be protected from abuse. Her lawyer said she told him otherwise.

"I know they're saying she left her child there without any type of adult supervision, but that's not what she's saying," Lewis's attorney Emory Anthony said. "Right now we're just trying to find out what they have," Anthony said, declining further comment before Lewis's preliminary hearing.

Charging the girl's mother with manslaughter could be strategic so that a jury could be instructed to also consider child abuse or neglect, Carroll.

"They could convict her on a lesser offense, they can't go the other way though," she said.

The boy's mother hasn't been charged.