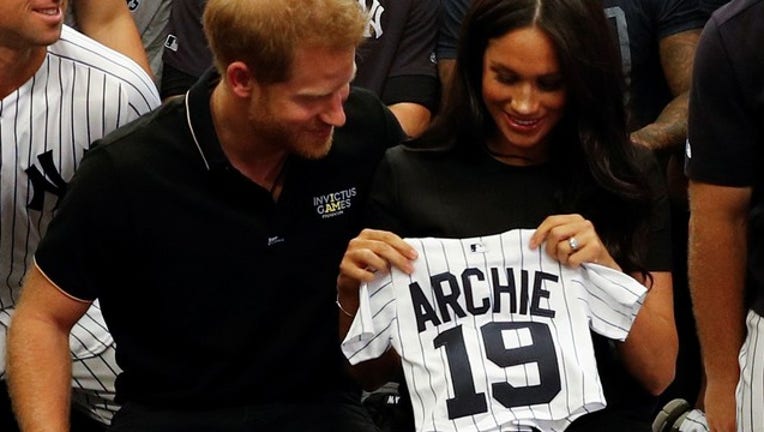 Prince Harry, Duke of Sussex and Meghan, Duchess of Sussex with a gift from the New York Yankees before their game against the Boston Red Sox at London Stadium on June 29, 2019 in London, England.

HOUSTON (FOX 26) - LONDON (AP) - America's national pastime made a positive impression on British fans the first time they got to see the game up close and personal on British soil.

That may have been helped by a warm, picture-perfect day in often overcast London - baseball weather at its best, played on a midsummer's eve with sunlight that seemed to never fade - and by a slugfest that, to say the least, emphasized power over precision pitching.

Things American fans take for granted, like standing for the national anthem, or joshing rival fans without getting overly crude, struck many Brits in London Stadium as a refreshing change.

"It's brilliant, it's amazing, it's so American as well," said Jack Lockwood, a 23-year-old who pitches and plays catcher in an amateur baseball league in the city of Sheffield. "I've been to hundreds of football (soccer) games and it's just such a different atmosphere. I just like the American positivity."

Lockwood spent about six hours on a train to get to and from London for the game, but he considered the trip well worth it, even though his favorite team - the Los Angeles Dodgers - wasn't playing.

He said it would be impossible to have fans from two rival English soccer teams sit in the same stands - intermingled as New York Yankees and Boston Red Sox fans were at Saturday's game - without violent scenes.

"You put two rival football teams' fans in the same stands, you'll get a fight," he said. "In baseball, you can put the fans together and you can have a laugh with anyone."

There were some British touches at the game, like the roaming vendors selling Pimm's cocktails and gin and tonics, but the focus was generally on typical American ballpark fare: hot dogs, nachos, burgers and beer. There were even supersized hot dogs, checking in at 2 feet long.

"It's the way the Americans do sports," said pleased British fan Stuart Graham, 45. "The way they have the spectator in mind. You know you're sitting there and the man comes around with your beer and your hot dogs and you can relax and enjoy the game. It's really very different to what we're used to."

He and Ian Muggridge bought the tickets months ago, spurred in part by the storied Red Sox-Yankees rivalry, which promised to bring top talent to the British capital.

"Two big heavyweights of U.S. baseball, sort of like Manchester United playing Liverpool in the UK," he said, referring to British soccer rivals. "Great spectacle to come and see."

He did find one disappointment to baseball in Britain: The hot dogs weren't as good as the ones he'd enjoyed at an American park.

Muggridge appreciated the mood in the park, with the playing of the U.S. and British national anthems before the game.

"I like the fact that it's got quite a patriotic feel about it," he said. "You don't often get that in British sports. We tend to avoid that, whereas in America you just put it out there."

While many British fans only had to jump a Tube train to get to the park, thousands of American fans flew across the Atlantic at considerable expenses to catch the historic games.

"It's been fun, the whole thing has been really cool," she said, although she found the crowd far less raucous than those she had been part of in Yankees Stadium and Fenway Park. Call it British reserve.

"It's quiet," she said. "It's the quietest sporting event I've ever been to."