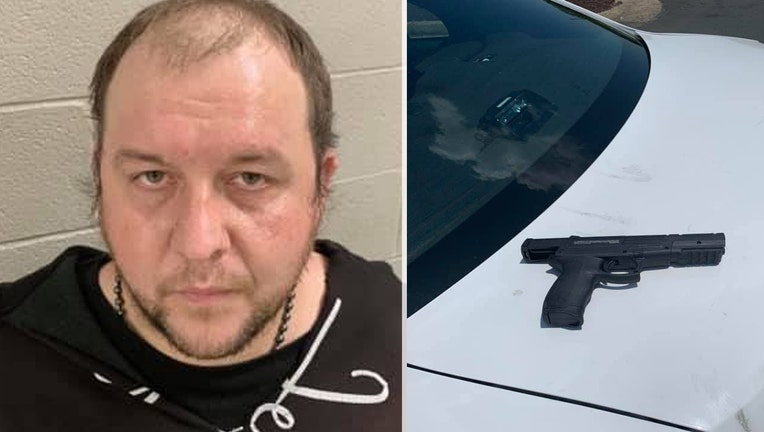 Authorities in Stafford County say a dispute over a fast-food menu item led to a man making threats and brandishing a BB gun before being arrested over the weekend.

The incident began around 10 a.m. Sunday at the McDonald’s on Jefferson Davis Highway in Stafford.

Officers say 36-year-old DoorDash driver James Springer became angry at restaurant employees who told him he could not order Happy Meals from the breakfast menu. Officials say Springer became agitated -- and before leaving the restaurant -- said he would return and "execute everyone" there.

Authorities in Stafford County say a dispute over a fast-food menu item led to a man making threats and brandishing a BB gun before being arrested over the weekend.

While searching for Springer, police say they received two calls for a man brandishing a weapon while behind the wheel of a vehicle. Officers say the first was reported in the merge area of Garrisonville Road and Intersate-95 where they say a driver pointed a handgun at the occupants of another car. A second report was made by a motorist parked at a nearby Panera Bread who said a driver pulled up next to them and pointed a gun at them.

As police continued to investigate the initial call and the additional reports, they say Springer went back to the McDonald’s where he threatened a customer. Police say they were able to take Springer into custody without incident.

He faces charges of disorderly conduct, abusive language and four counts of brandishing and is being held at the Rappahannock Regional Jail on a $1,500 bond.