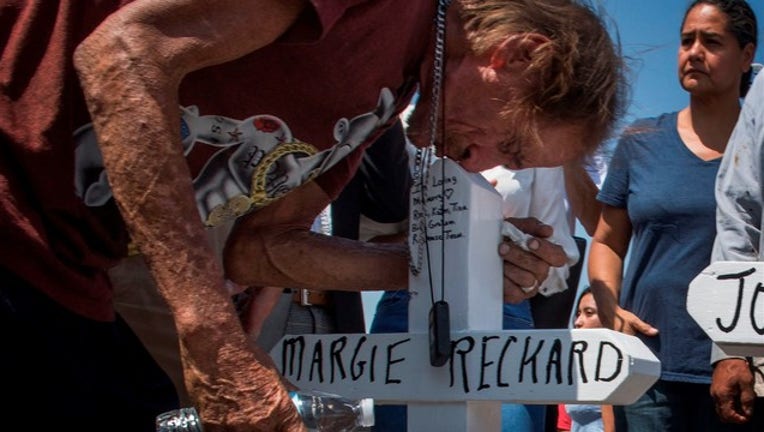 Antonio Basco kisses the cross with the name of his common-law wife Margie Reckard, who died in the shooting that left 22 people dead at the Cielo Vista Mall WalMart in El Paso, Texas, on August 5, 2019.(Photo by Mark RALSTON / AFP/Getty Images)

EL PASO (FOX 26) - A man is inviting the public to his wife's funeral after she was killed in the El Paso mass shooting because he has no family to help send her off.

Perches Funeral Home posted the open invitation to Margie Reckard’s funeral on Facebook. The post included a photo of Antonio Basco kneeling at a vigil for the shooting victims.

Basco was married to Reckard for 22 years.

Basco told KFOX-TV that Reckard’s kindness and selflessness were incomparable.

"I mean you didn't even have to be there to talk to her. You could just look at how she was, how she acted, how she presented herself. She was an awesome lady," he said. "You see Margie, more or less, was the brains of the family."

Basco said he and Reckard knew there was something between them as soon as they met, and their life together was like something out of a fairy tale. Reckard was the strong one, he said, and she's "going to be missed a lot."

"We were gonna live together and die together," he said. "That was our plan.“

Her funeral is scheduled for Friday, August 16.