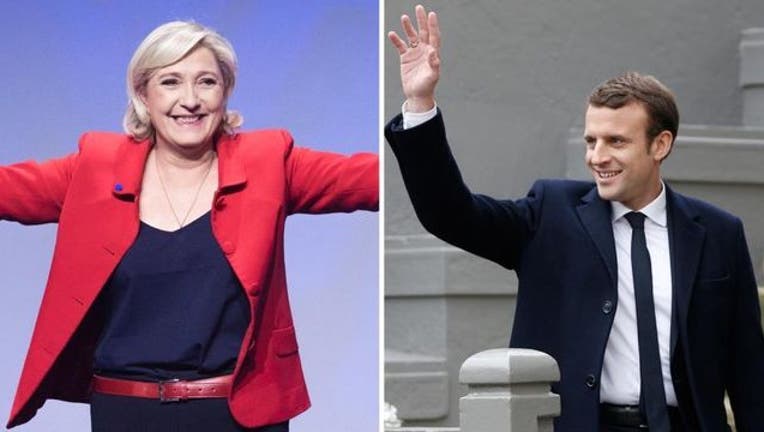 Here's a look at just a few of the ways the two candidates diverge:

Macron is fierily promoting common European ideals of peace, prosperity and freedom. He says that, with Britain leaving, the bloc needs to build a new leadership base anchored by France and Germany.

He wants the bloc to be able to deploy 5,000 European border guards to the external borders of the Schengen passport-free travel zone, and proposes a European fund to finance and develop shared military equipment.

Le Pen, on the other hand, wants to pull France from the European Union. She advocates for closing France's borders, protectionist trade policies and dropping the shared euro currency to return to the French franc. She promised to restore France as a sovereign state in charge of its own borders and money supply, and to crack down on immigration.

She considers Macron "an immigrationist" because he has backed German Chancellor Angela Merkel's policies to welcome refugees from Syria.

Le Pen asked a television program to remove the European flag from the stage during her speech. During Macron's rallies, by contrast, many supporters wave European flags alongside French flags.

In a country marked by a series of attacks by Islamic extremists, Le Pen and Macron both pledged to boost police and military and intelligence services.

Yet their views on international policies are starkly different.

Macron pledges to keep up French operations against extremists in Iraq and Syria and Africa's Sahel region; Le Pen wants France to be militarily independent and to leave NATO's command to avoid being "drawn into others' wars."

Macron proposes to increase the French defense budget to at least 2 percent of GDP by 2025, up from 1.78 percent now - in line with NATO targets - and to keep the number of overall military troops stable at 200,000.

Bold and gritty, Le Pen, 48, is an experienced leader making her second bid for the French presidency. She has held elected office several times in northern France and has been a European lawmaker since 2004.

On stage, she favors a classic style, often wearing somber suits or playing on the blue-white-red colors of the French flag.

A rousing speaker, she likes to use dramatic, cut-to-the-chase expressions and doesn't hesitate to harshly criticize her rivals.

Macron, 39, has never held elected office. He is a literature lover who likes to quote French authors in his lengthy speeches. He asks his supporters not to boo other politicians.

Even their music choices contrast: Macron's supporters were dancing to modern techno music during his election party in a Parisian exhibition center. Le Pen's militants were celebrating with 1980s standards in her town of Henin-Beaumont in northern France.