Pastor urges Americans to donate stimulus checks to his church

Using #PastorSpellStimulusChallenge, Pastor Tony Spell is asking members of his congregation and other Americans to donate the stimulus money they received from the federal government to his church's fund designated to help evangelists, missionaries, and music ministers.

CENTRAL, La. - The embattled Louisiana pastor who made headlines for flouting social distancing measures and was arrested Tuesday after being accused of nearly running over a protester with a bus is asking congregants and other Americans to donate their stimulus checks to his church.

Pastor Tony Spell of the Life Tabernacle Church in Baton Rouge said he, his wife and children have all donated the stimulus money they received from the federal government to the church fund designated to help evangelists, missionaries, and music ministers, WAFB-TV in Baton Rouge reported.

Using #PastorSpellStimulusChallenge, he is asking members of his congregation and other Americans to do the same, arguing these men and women of faith have not been able to receive contributions from normal church collections in over a month, as houses of worship are forced to remain closed under a statewide stay-at-home order meant to curb the spread of the coronavirus pandemic.

Appearing on CNN’s “New Day Weekend” on Sunday, Spell defended his decision to ask congregants for their federal stimulus checks, arguing the money would help churches from becoming directly dependent on government funding and control.

“We are giving to those who do not have,” the pastor said. “We are challenging you, if you can, give your stimulus package to evangelists and missionaries who do not get the package. They don’t file taxes the way you and I do.”

Spell said he decided not to apply for the Payroll Protection Program passed by Congress last month, despite nonprofits and faith-based ministries being eligible for aid to keep employees, including evangelists and foreign missionaries, on the payroll.

“We do not want SBA loans,” he continued. “We don’t want the government to give us a dime. We are happy to provide for ourselves. Never will our federal or state government put one penny into our church, because the second they do, they control us.”

Meanwhile, the Central Police Department in Louisiana said Tuesday that Spell turned himself in after a warrant was issued for his arrest a day earlier. He was charged with aggravated assault with a deadly weapon and improper backing of a vehicle related to an incident over the weekend.

He was released Tuesday afternoon.

Spell was reportedly filmed backing a church bus toward a protester outside the church before stopping a few feet away from him, according to local media reports.

“That man has been in front of my church driveway for three weeks now,” Spell told WAFB-TV on Monday. “He shoots people obscene finger gestures and shouts vulgarities.

“I was pulling in from my bus route, picking up black children who haven’t eaten because of this sinister policy that has closed schools,” he added. “I was going to approach this gentleman and ask him to leave.”

The protester, Trey Bennett, told the news station that he's been demonstrating outside of the church since Easter Sunday. One of his signs reads: “CAUTION: Coronavirus incubator. Do not enter. You may die.” 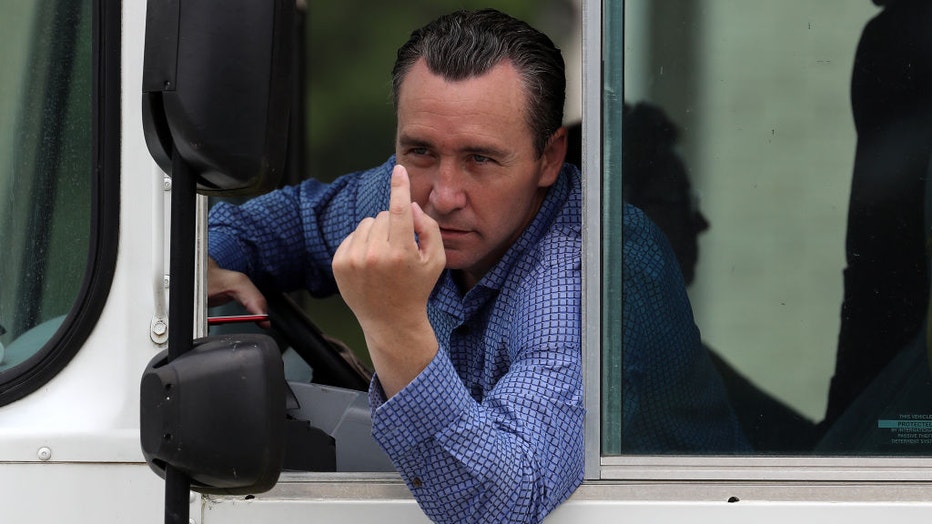 Pastor Tony Spell talks to the media as he drives a bus of congregants from Life Tabernacle Church after Easter church services on April 12, 2020 in Central, Louisiana. Pastor Spell has been holding in-person services despite Louisiana Gov. John Bel

A second arrest warrant was issued for the driver of a truck that appeared swerve off the road in a separate attempt to hit Bennett, police said.

“And he [man in white truck] was going very fast. He just pulled over at me and turned into the church. That was much faster than what Tony Spell was doing when he drove the bus at me,” Bennett said.

While most churches have transitioned to virtual religious services amid the coronavirus pandemic, Spell continued to hold in-person services with hundreds of followers despite a stay-at-home order issued by Democratic Gov. John Bel Edwards. One Sunday service drew an estimated 500 parishioners.

Spell was also arrested last month and charged with six misdemeanor counts for violating the order. Speaking to Fox News after that arrest, the pastor said he was exercising his First Amendment rights and a mandate from Jesus Christ.

His attorney, Jeff Wittenbrink, was hospitalized last week after contracting the virus himself. One parishioner who attended services at the church reportedly died from COVID-19 last week, according to media reports.

Fox News' Louis Casiano and Caleb Parke contributed to this report. Get updates on this story from foxnews.com.