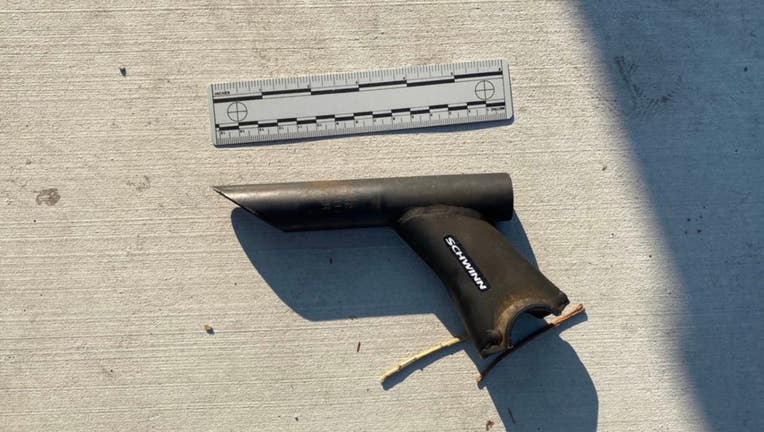 LOS ANGELES - The Los Angeles Police Department supervisor who fatally shot an unarmed man near the border between Los Angeles and Culver City
mistook a bicycle part in his hand for a gun, police reported.

Police received a call around 12:40 p.m. Saturday about a "man with a gun'' and a Pacific Division patrol field supervisor in the area, Sgt.
Colin Langsdale, responded to the scene, police reported.

Langsdale found the man, exited the vehicle, and saw him point what Langsdale later said he believed was a handgun. Police reported that a witness also said he believed the item in his hand was a gun. Langsdale shot the man about 12:55 p.m. Saturday in the area of Venice Boulevard at Tuller Avenue and took him into custody, according to police.

The man was treated at the scene and then taken to Ronald Reagan UCLA Medical Center, where he was pronounced dead, according to police.

Police announced Friday the man was holding a bicycle part at the time of the shooting, not a handgun. A picture released by the LAPD showed the part was a similar shape as a gun.

The LAPD did not release the deceased man's name but Adam Smith, A White People 4 Black Lives organizer, said at a rally Friday his name was Victor Valencia and "was houseless and apparently struggled with mental health issues,'' the Los Angeles Times reported.

The shooting occurred about a block from a homeless encampment. Activists at the rally called for the LAPD to release the transcript
of the 911 call and the body camera footage of the shooting immediately, ahead of its automatic release within 45 days of the shooting, according to The Times.

As with all officer-involved shootings, the investigation by the LAPD's Force Investigation Division will be reviewed by Chief Michel Moore, the Board of Police Commissioners and the Office of the Inspector General to determine the thoroughness and accuracy of the investigation and whether the use of deadly force complied with the LAPD's policies and procedures.

Representatives from the Los Angeles County District Attorney's Office will also review the investigation, evidence collected and witness
statements to determine if Langsdale violated any laws.