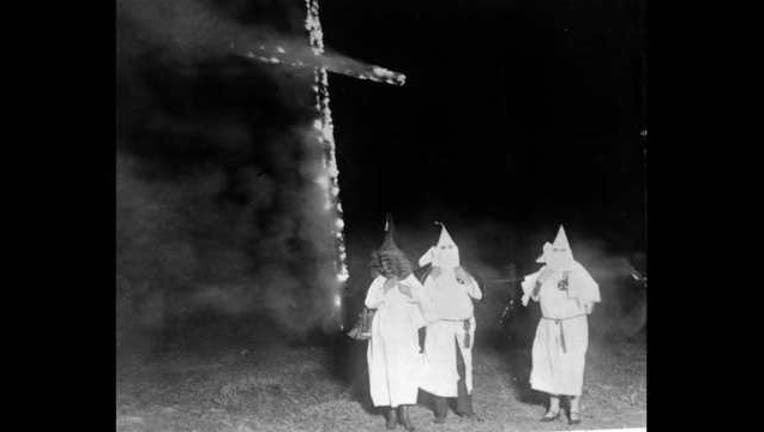 GAINESVILLE, Fla. (AP) - Three Ku Klux Klan members who worked at a Florida prison have been charged with plotting to kill a black inmate after his release in retaliation for a fight, officials said Thursday, in a case that marks the latest black eye for the troubled state prison system.

The state said the murder plotting started after Driver, an officer at the Department of Corrections Reception and Medical Center in rural north Florida, had a fight with the inmate.

Moran is currently an officer sergeant at that facility. Newcomb was fired in 2013 for failing to meet training requirements, according to the department.

Bondi's office said the three were also members of the Traditionalist American Knights of the Ku Klux Klan. The group that has garnered attention in recent months for distributing flyers that likened protesters in Ferguson, Missouri to terrorists.

The wide-ranging investigation included the FBI, U.S. Customs and Border Patrol and various state and local agencies. The FBI's office in Jacksonville said it would not comment on an open investigation.

Driver and Moran each had incidents of bad behavior in their employee files, according to the Department of Corrections. Moran, the officer sergeant, was reprimanded in 1999 and 2006 for conduct unbecoming of a public employee and Driver had been cited for willful violation of rules.

Jordan-Aparo was reportedly gassed while in a confinement cell at the Franklin Correctional Institution.

Rainey, a mentally ill prisoner, was punished in 2012 with a shower so hot that his skin separated from his body. Witnesses say guards at Dade Correctional Institution left Rainey alone for two hours in a locked, scalding hot shower as punishment for defecating in his cell and refusing to clean it up. The warden at Dade Correctional was fired.

"We are moving swiftly to terminate the employees arrested today and working closely with Office of the Attorney General to assist in their prosecution," she said in a statement.

"Our Department has zero tolerance for racism or prejudice of any kind. The actions of these individuals are unacceptable and do not, in any way, represent the thousands of good, hardworking honorable correctional officers employed at the Department of Corrections."

The case will be prosecuted in Columbia County in north Florida. The State Attorney's office there did not immediately return a call seeking comment.

Driver and Moran are being held in Union County jail. Newcomb is in Alachua County Jail on a $750,000 bond.

Frank Ancona, imperial wizard of the KKK group to which the three men were said to belong, did not confirm or deny their membership.

"We at the TAK do not in any way condone, tolerate, or support any type of illegal activity in our organization and because of this we would stand by any of our members pending a decision by a court of law, not a decision of the court of media or public opinion," Ancona said.