The Kinder Institute report finds that even in 2019, Harris County had the second-highest eviction rate in the country, only behind New York City.

HARRIS COUNTY - While we're facing an eviction crisis from COVID-19, a new study from Rice University's Kinder Institute points out that even before the pandemic, evictions cost Harris County more than $300 million a year.

The Kinder Institute report finds that even in 2019, Harris County had the second-highest eviction rate in the country, only behind New York City.

"Now I'm out of work and I got to deal with this. Still waiting to hear form unemployment. I'm about a month and half in making payment requests and still no kind of letter or nothing," said husband and father of two, Daniel Vasquez, Jr.

Vasquez, Jr. says he and his family are being evicted tomorrow.

"If I don't leave on that date, the landlord will get a writ and get a sheriff and move us from the property," he said.

That's the harsh reality for thousands of families in Harris County. A Kinder Institute study shows that when a family is evicted, it costs the public and private sectors $315 million a year, for expenses such as shelter, medical care, child welfare, and in some cases criminal justice services. 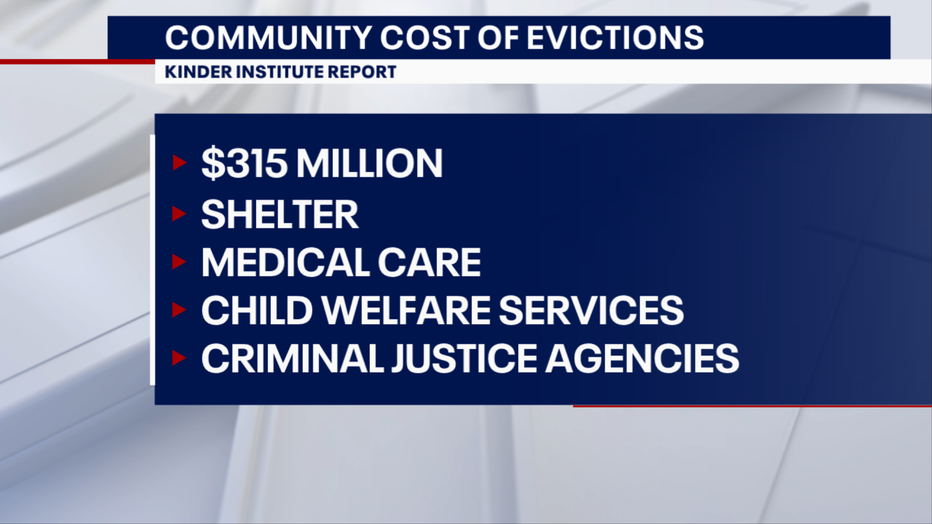 "What happens is not just the tremendous moral cost of having evicted families scrambling for housing, but there is also a very large fiscal and economic cost," said Kinder Institute researcher Dr. Steve Sherman.

Most experts point the blame at the same problem:  the city's lack of affordable housing.

"There really isn't an incentive for builders to build things at the lower end of the rental market," said Sherman.

"Many of our families are what's called rent-burdened. That is to say, paying more than the appropriate amount of rent and therefore more sensitive to income fluctuations," said Mark Thiele, interim President of the Houston Housing Authority.

There are only 19 affordable housing units for every 100 households in need, according to the National Low Income Housing Coalition.

$350 million in federal funding since Hurricane Harvey has helped the City of Houston and developers launch 30 new developments. But it still won't be enough.  And experts urge lawmakers to look for long term solutions.

"'The big picture solution, from a housing perspective, is fully funding tools like the voucher system. Right now there's only one voucher available for every four eligible families," said Thiele.

Or, they say, too many families will be faced with having nowhere to go.

"I'm in a situation where I have to move. I have no other choice," said Vasquez.

The Kinder researchers also recommend offering more free legal aid for eviction hearings and giving renters more than three days to be late on rent before a landlord can file for eviction.

LOOKING FOR A JOB? TRY WORKINTEXAS.COM!