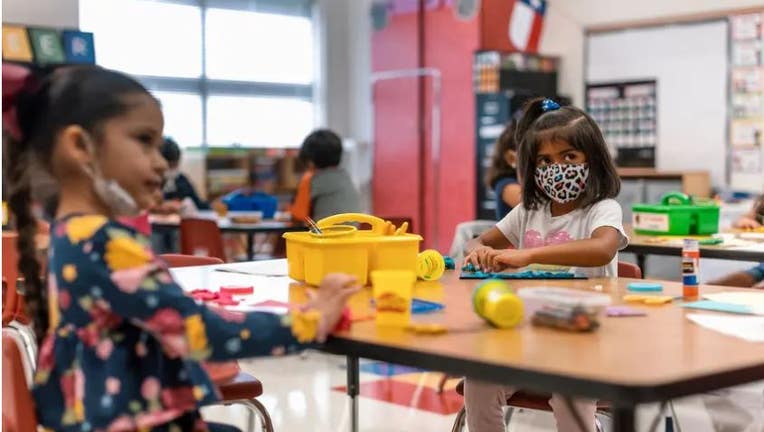 Texas families of children with disabilities who have filed a lawsuit challenging Gov. Greg Abbott’s ban on mask mandates in schools now have the federal government in their corner.

On Wednesday, the U.S. Department of Justice filed a formal statement in support of the federal lawsuit filed in August by the advocacy group Disability Rights Texas. In the statement, federal attorneys argue that banning public schools from requiring masks for students keeps disabled children from accessing in-person classes during the ongoing coronavirus pandemic.

The statement points out that Abbott’s executive order this summer, which bans mask mandates, "has the effect of denying them an equal opportunity to participate in and benefit from the in-person instruction offered by their public schools."

Even if school districts offer a virtual learning option, the federal agency insists the governor’s order still violates the Americans with Disabilities Act because all students need to be afforded every option available. The pandemic does not authorize officials to ignore the ADA; if anything, states need to be more sensitive to public health needs, the department said.

The department noted that following the ADA superseded any order.

Renae Eze, a spokesperson for Abbott, said in a statement that the federal government misunderstands the executive order as it doesn’t prohibit anyone in schools from wearing masks, it only prohibits the mandating of masks.

"Any Texan from any background has the right and ability to wear a mask if they choose – and parents are the best decision-makers for their children," Eze said.

Dustin Rynders, supervising attorney at Disability Rights Texas, said in a statement that the organization is pleased the federal government is rallying behind the case.

"Just like forbidding ramps at school entrances would be form of discrimination, forbidding masking requirements can also discriminate against those who need others to wear a mask so they can attend school," Rynders said.

The group argues that the governor’s order and the TEA’s enforcement of it deny children with disabilities access to public education as they are at high risk of illness and death from the virus.

Because of this, Disability Rights Texas’ lawsuit states Texas is violating the ADA and Section 504 of the Rehabilitation Act, which forbids organizations and employers from excluding or denying individuals with disabilities an equal opportunity to receive program benefits and services. A trial is set to take place before U.S. District Judge Lee Yeakel in Austin on Wednesday.

Neither Morath nor the TEA responded to a request for comment.

The TEA had largely stepped away from enforcing the governor’s order as lawsuits swarmed from across the state and courts were going back and forth on decisions. But on Sept. 17, the agency quietly updated its guidance, saying that school districts can’t require face coverings because the courts were not blocking Abbott’s executive order prohibiting local mask mandates.

The TEA’s latest guidance amplifies an ongoing war over coronavirus precautions that has left school officials and parents with whiplash about what requirements are — or aren’t — in place.

But as the new school year approached, a surge of coronavirus infections and hospitalizations prompted some local officials to buck Abbott’s prohibition in order to protect teachers and schoolchildren. Coronavirus vaccines still aren’t approved for children younger than 12.

And about two months into the school year, Texas schools have reported more coronavirus cases than they did in the entire 2020-21 school year.

While the TEA is being sued in federal court, the U.S. Department of Education Office for Civil Rights is also investigating the agency after deeming that its guidance prohibiting mask mandates in schools may be "preventing school districts in the state from considering or meeting the needs of students with disabilities."

The federal civil rights office has also launched similar investigations in Iowa, Oklahoma, South Carolina, Tennessee and Utah. It had not done so in Texas because the TEA was previously not enforcing the governor’s order while there was ongoing litigation.

In a letter to the TEA commissioner, federal officials said the investigation will focus on whether students with disabilities who are at greater risk for severe illness from COVID-19 are prevented from safely returning to in-person education, which would violate federal law, wrote Suzanne B. Goldberg, the acting assistant secretary for civil rights.

Goldberg stated that her office is worried that Texas’ mask policy does not allow for "an equal educational opportunity to students with disabilities who are at heightened risk of severe illness from COVID-19."