Smollett is charged with felony disorderly conduct for making what prosecutors say was a false police report about the alleged attack.

CHICAGO - Two brothers arrested for an alleged attack on Jussie Smollett told Chicago police how the ex-"Empire" actor orchestrated the hoax, telling them via text message to meet him "on the low," paying for supplies and holding a "dry run" in downtown Chicago, the lead investigator testified Tuesday.

Taking the stand as prosecutors began their case against Smollett, former Chicago police detective Michael Theis said he initially viewed the actor as a victim of a homophobic and racist attack and that police "absolutely" didn’t rush to judgment as Smollett’s defense attorney alleged during opening statements Monday.

Theis said roughly two dozen detectives clocked some 3,000 hours on what they thought was a "horrible hate crime" in January 2019. He said they were excited when they were able to track the movements of two suspected attackers using surveillance video and cellphone and rideshare records.

"The crime was a hate crime, a horrible hate crime," Theis said, noting Smollett reported that his attackers put a noose around his neck and poured bleach on him. He said the case had become national and international news and that "everybody from the mayor on down wanted to know what happened," a reference to then-Mayor Rahm Emanuel.

Smollett is charged with felony disorderly conduct for making what prosecutors say was a false police report about the alleged attack. The class 4 felony carries a prison sentence of up to three years, but experts have said if Smollett is convicted it’s likely he would be placed on probation and perhaps ordered to perform community service.

After police arrested Abimbola and Olabingo Osundairo — brothers who also worked on the "Empire" set — as they returned to Chicago from Nigeria, the men said Smollett wanted to stage the attack because he was unhappy about how the TV studio handled hate mail the actor had received, Theis said. He said investigators checked out the brothers’ account, including that the actor picked them up days before the attack and drove them around the area of downtown where he lived and talked about what would happen, and corroborated their version of events using GPS, cellphone records and video evidence. Police found no instance where they concluded the men were lying, he added.

Jurors were shown surveillance video of the brothers buying supplies, including a red hat they told police Smollett wanted them to wear to resemble supporters of then-President Donald Trump, and a piece of clothesline later fashioned into the noose.

"At the end of the investigation, we determined that the alleged hate crime was actually a staged event," Theis said, and the Osundairo brothers were released.

Jussie Smollett "is a real victim" of a "real crime," his attorney said in opening statements at the ex-"Empire" actor’s trial Monday.

Defense attorney Nenye Uche said during opening statements late Monday that the brothers attacked Smollett because they didn’t like him and that a $3,500 check the actor paid them was for training so he could prepare for an upcoming music video. Uche also suggested that a third attacker was involved and told jurors there was not a "shred" of physical and forensic evidence linking Smollett to the crime prosecutors allege.

The brothers will take the stand but it’s unknown if Smollett will testify.

Uche portrayed the brothers as unreliable, saying their story has changed while Smollett’s has not, and that when police searched their home they found heroin and guns.

"They are going to lie to your face," Uche told the jury.

Outside the courtroom Tuesday, Smollett’s brother said it has been "incredibly painful" for the family to watch Smollett be accused of something he "did not do."

"We’re confident in his legal team, and we look forward to people hearing the actual facts of this case," Jojo Smollett said.

"When he reported the fake hate crime, that was a real crime," Webb said.

Webb said Smollett thought the TV studio didn’t take hate mail he received seriously. Police haven’t determined who wrote the letter, which included a drawing of a stick figure hanging from a tree and "MAGA," a reference to Trump’s Make America Great Again campaign slogan. Webb said Smollett told the brothers to shout racial and homophobic slurs and "MAGA" during the staged attack.

Uche countered that Smollett turned down extra security when the studio offered it, and he told jurors there was not a "shred" of physical and forensic evidence linking Smollett to the crime prosecutors allege.

Uche also suggested that a third attacker was involved. Buried in nearly 500 pages of Chicago Police Department reports is a statement from an area resident who says she saw a white man with "reddish brown hair" who appeared to be waiting for someone that night. She told a detective that when the man turned away from her, she "could see hanging out from underneath his jacket what appeared to be a rope."

Her comments could back up Smollett’s contention that his attackers draped a makeshift noose around his neck. Further, if she testifies that the man was white, it would support Smollett’s statements — widely ridiculed because the brothers are Black — that he saw pale or white skin around the eyes of one of his masked attackers.

Twelve jurors plus two alternates were sworn in Monday to hear the case, which Judge James Linn expects to last about one week. 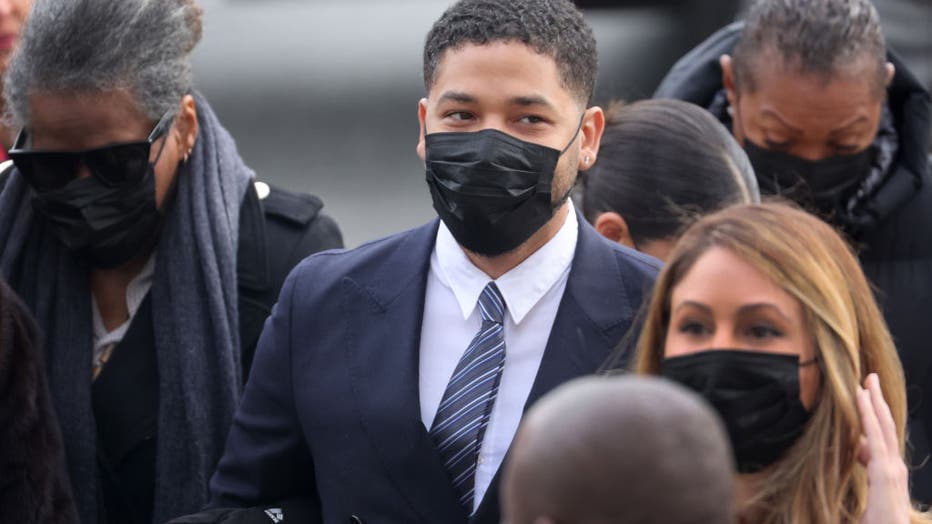 Former "Empire" actor Jussie Smollett arrives at the Leighton Courts Building for the start of jury selection in his trial on November 29, 2021 in Chicago, Illinois. (Photo by Scott Olson/Getty Images)