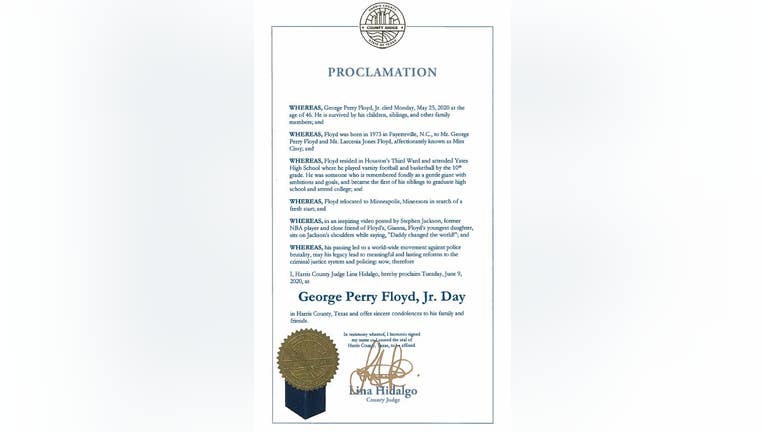 On Monday, County Judge Lina Hidalgo signed the proclamation, which coincides with the burial of Floyd, who grew up in the Third Ward.

His Houston memorial service was visited by more than 6,300 mourners.

“We must never forget the name George Floyd or the global movement he has inspired,” said Judge Hidalgo. “George Floyd’s death, and the deaths of Breonna Taylor, Sandra Bland, Tamir Rice, Ahmaud Arbery, and too many others have sparked a national conversation about race and police brutality.

It has taken far too long for us to get here, but we must lean forward and work to make meaningful change in our nation. No family should lose another loved one in such a senseless way.”

This move comes on the heels of numerous policies to advance criminal justice reform since Judge Hidalgo took office, including:

MORE: When protesters cry 'defund the police,' what does it mean?

-   A 91% increase to the Public Defender’s budget
-   Landmark settlement reforming the cash bail system in Harris County to ensure people are not in jail simply for being poor
-   Implementation of Managed Assigned Counsel system for court-appointed attorneys in criminal cases to be named in an unbiased way
-   Commissioning of an ongoing, thorough study that is evaluating criminal justice processes and budgeting