Here are the times in history when the Olympics have been canceled or postponed.

TOKYO - Fans were banned from the Tokyo Olympics set to open in just two weeks after a state of emergency was declared on Thursday, officials said.

The ban was announced by the International Olympic Committee and Japanese organizers, reducing the games to a made-for-TV event. Fans from abroad were banned months ago from attending the Olympics.

Earlier Thursday, Japanese Prime Minister Yoshihide Suga announced a state of emergency for the capital due to rising COVID-19 infections. He said it would go into effect on Monday and last through Aug. 22. This means the Olympics, opening on July 23 and running through Aug. 8, will be held entirely under emergency measures. The Paralympics open on Aug. 24.

The announcement came as IOC President Thomas Bach arrived in Tokyo. Bach went to the IOC's games headquarters, a five-star hotel in the center of the city, where he was reported to need to self-isolate for three days.

Just two weeks ago, organizers and the IOC had decided to allow venues to be filled to 50% of capacity but crowds not to exceed 10,000. The new measures announced by Suga will clear venues around Tokyo — indoor and outdoor — of any fans at all. 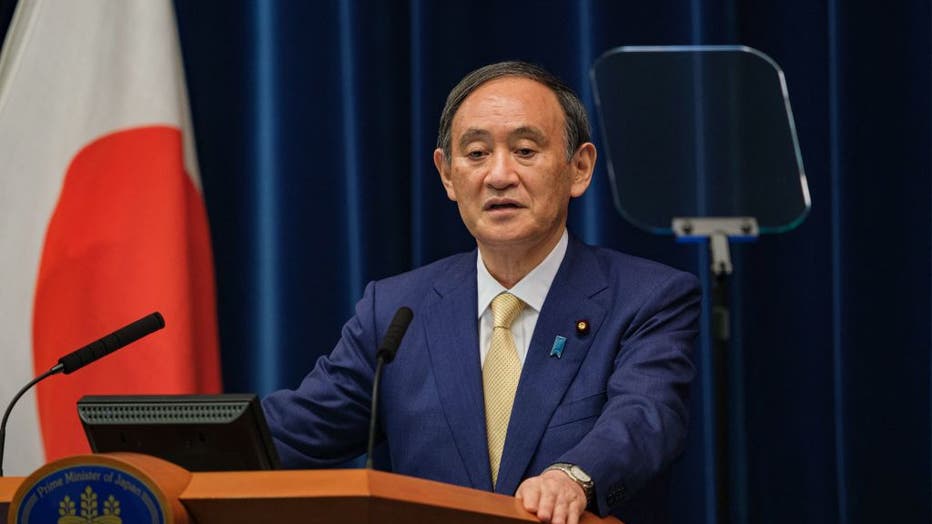 Japan's Prime Minister Yoshihide Suga speaks during a press conference on a new coronavirus state of emergency stretching throughout the Tokyo Olympics, at the prime minister's official residence in Tokyo on July 8, 2021. (Photo by NICOLAS DATICHE/PO

The present state of emergency ends Sunday. Tokyo reported 896 new cases on Thursday, up from 673 a week earlier. It's the 19th straight day that cases have topped the mark set seven days prior. New cases on Wednesday hit 920, the highest total since 1,010 were reported on May 13.

"Taking into consideration the impact of the delta strain, and in order to prevent the resurgence of infections from spreading across the country, we need to step up virus prevention measures," Suga said.

Suga, who had long favored fans, hinted at a no-fan Olympics in announcing the state of emergency.

"I have already said I won’t hesitate to have no spectators," he added.

The main focus of the emergency is a request for bars, restaurants and karaoke parlors serving alcohol to close, part of an effort to tone down Olympic-related festivities with drinking and partying.

"The infections are in their expansion phase and everyone in this country must firmly understand the seriousness of it," Dr. Shigeru Omi, a top government medical adviser, said.

Omi has repeatedly called for a ban on spectators and has said it's "abnormal" to hold the Olympics during a pandemic. In a report sent last month to the government and Olympic officials, Omi stressed that the safest way to hold the games is without any fans.

"We believe the risks of infections inside venues would be lowest by holding the event with no fans," said the June 18 report, which was compiled by a group of 26 experts led by Omi, a former World Health Organization official.

Separately, a government COVID-19 advisory panel met Wednesday and expressed concerns about the ongoing resurgence of the infections.

"Two-thirds of the infections in the capital region are from Tokyo, and our concern is the spread of the infections to neighboring areas," said Ryuji Wakita, director-general of the National Institute of Infectious Diseases.

The Olympics are pushing ahead against most medical advice, partially because the postponement stalled the IOC’s income flow. It gets almost 75% of its income from selling broadcast rights, and estimates suggest it would lose $3 billion to $4 billion if the Olympics were canceled.

About 11,000 Olympians and 4,400 Paralympians are expected to enter Japan, with tens of thousands of officials, judges, administrators, sponsors, broadcasters, and media also entering. The IOC says more than 80% of residents of the Olympic Village will be vaccinated.

Japan has had about 810,000 COVID-19 cases and nearly 14,900 deaths since the onset of the pandemic, according to Johns Hopkins University. Only 15% of Japanese are fully vaccinated, still low compared with 47.4% in the United States and almost 50% in Britain.